Have you ever had some delicious cold cut only to see it shimmer like a rainbow, halfway through your sandwich ? It didn’t seem to taste bad, so what was the deal with all those colors ?

Why is meat sometimes iridescent ? Does it only happen for deli meat ? Can raw meat have a rainbow on it ? Is it still safe to eat ? Let’s find out ! 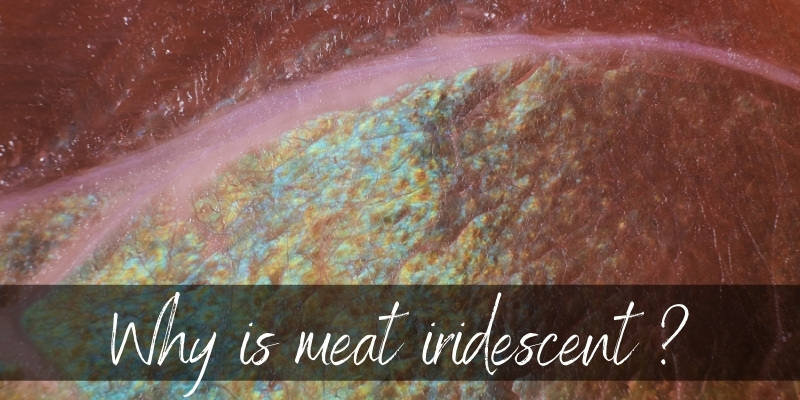 Table Of Content show
1 Why is meat iridescent?
2 Is iridescent meat safe to eat?
2.1 Is iridescent beef okay ?
3 What meat colors indicate spoilage?
3.1 When in doubt, sniff the meat

Why is meat iridescent?

Meat is iridescent because the muscle fiber structure is not uniform across the section of the cut. Bundles make muscles of fibers that run in different directions to produce tension when they contract. This is true even in a relatively simple structure like chicken breast.

The result is that light waves reflecting off each layer will be at a slightly different angle, thus shifting the color depending on your viewing angle. This effect can play tricks on your eyes, especially with marbled meat within them, since this will introduce another element with a unique reflected pattern.

Another reason for ‘iridescence’ in meat could be due to intramuscular lipid (marbling). This is why meat colors can appear different at different angles. The layers of fat within muscles scatter light which may result in a more prominent sheen/shine on the surface of the meat.

This effect appears stronger when viewed from an acute angle rather than directly from above or below.

In rare cases, it’s possible to get an oxidized section if a cut of meat (in this case beef) has been exposed for too long to oxygen and is beginning to turn brown or grey. This most commonly happens close to the exterior parts of the cut, where oxygen has had a chance to interact with the muscle over a more extended time.

In this case, the meat may have a grey color but still have areas where the underlying red is visible. It will also typically turn an even grey color across the entire cut.

The marbling within muscles (and its associated effect on ‘shine’) is far more common since this is quite desirable for the appearance of cooked products.

Lastly, why do you think that some meats are more ‘shiny’ than others?

* The amount of intramuscular fat.
* The fineness of muscle fiber structure (a finer structure will ‘catch’ light better).
* Presence or absence of connective tissue in between bundles/layers, which would scatter light differently.

Is iridescent meat safe to eat?

Iridescent meat – reflecting a faint rainbow – is generally safe to eat, as long as it’s deli meat. Raw meat that is iridescent might be safe, but it depends on a few factors. Always check the expiration date for fresh meat, regardless of iridescence.

Each type of meat has different nutritional concerns to consider, and there are other factors such as genetic modification and feed to consider. When we talk about iridescent meat, we’re talking about is meat with a blueish hue. This color change can indicate spoilage, or it can occur naturally in meats like beef and tuna.

So the question remains: Is this variation safe to eat? And how should you handle these types of food items differently?

You need to know that not all meat color variations necessarily cause alarm or concern. Often when certain meats appear slightly blueish, iridescence may be present. This is not a health issue and doesn’t mean the color will taste bad.

The truth is, you should always cook your meats all the way through to kill harmful bacteria. But if you don’t do this, it doesn’t matter whether or not your meat has iridescence because it won’t be safe to eat anyway.

In the case of red meat, like beef steak or duck breast, you need to be 100% sure the meat source is very fresh. This king of meat is meant to be cooked rare, so always be careful when buying.

Yes, iridescent beef is generally safe to eat as it simply shows the same color play as other meat types. In fact cooked beef may show iridescence when:

The color of meat is not a good indicator of freshness or spoilage. Generally, as the product ages, it loses moisture and becomes drier. As this occurs, the pH level will change, and the pigment in the muscle fiber will start to break down, causing a shift to a darker color. 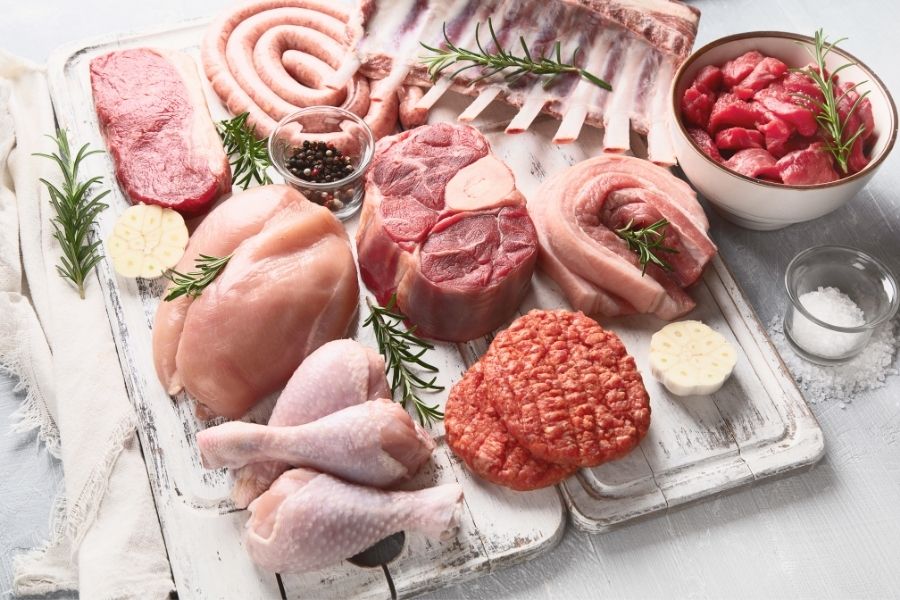 In fact, what happens is the myoglobin in the blood leftover within the meat oxidizes. In red meats this ends up looking brownish-grey, while in white meats it ends up looking grey-blue.

However, many variables impact these changes in color, such as species, diet, exercise, and packaging, affecting the ultimate color of meat. Thus there is no single answer to give when asking what meat colors indicate spoilage as it varies from one product to another depending on those factors mentioned above.

When in doubt, sniff the meat

One helpful indicator, however, is to use the ‘sniff test.’ If you suspect that your meat may not be fresh, give it a sniff. Spoiled meat will generally have an unpleasant aroma. Of course, other things can cause odors in your refrigerator, such as strong-smelling cheeses or old milk, so you should not base your decision solely on odor.

A giveaway of spoilage is the smell of rancid fat. If you’ve got a type of meat that has some fat in it – like chicken or pork – the fatty bits will begin to smell like dish soap mixed with hot lard. That’s the simplest way to describe it. If you smell anything like it be sure to toss the meat.

In short, iridescent meat isn’t a cause for concern in most cases. If you can then do a sniff test, it’s one of the safest ways to figure out if the meat is spoiled or not.