What makes the citrus family so exciting is that it consists of numerous delicious and aromatic fruits, among others pomelo and yuzu. They are both sour and succulent, rich in vitamin C and antioxidants, but are they really as similar as we think?

And now the question arises, how similar are pomelo and yuzu? 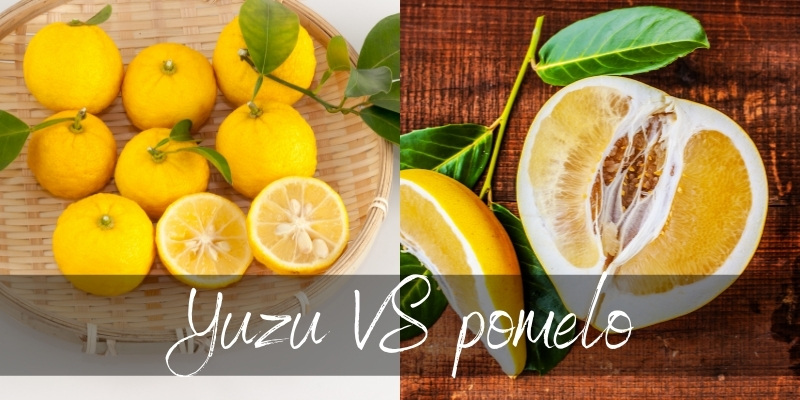 Table Of Content show
1 Pomelo vs Yuzu
1.1 Pomelos are larger than yuzu
1.2 Both yuzu and pomelo have similar colors
1.3 Yuzu is originally from China
2 Cooking with yuzu
3 Cooking with pomelo
4 Yuzu baths
5 Pomelo baths
6 Other uses

Pomelo and yuzu are different citrus fruits, with pomelo being one of the original 4 citrus ancestors. Pomelos are larger than yuzu, and the Chinese word for pomelo (youzi) used to include yuzu but not only refers to pomelo. The Japanese word yuzu is derived from that old meaning, so this could be the reason for a lot of confusion.

While you can eat a pomelo’s flesh, you can’t eat a yuzu as it’s too tough but you can use the juice. Yuzus are an important part of Japanese winter rituals, while pomelo is more international. Now let’s take a closer look at the differences between pomelo and yuzu.

Pomelos are larger than yuzu

Pomelo (Citrus Grandis) is the biggest citrus fruit globally and can reach up a watermelon’s size! With its 25 cm in diameter and up to 2kg in weight, pomelo is a pretty impressive fruit. This pear-shaped plant has a thick rind that peels easily. 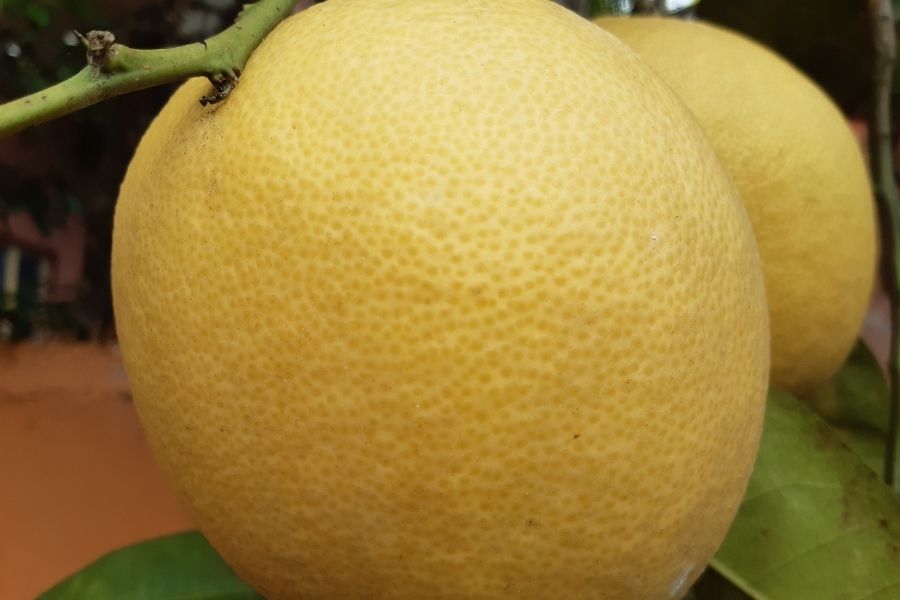 It’s a separate species and is crossed with the number of interesting fruits to produce many vital products, of which grapefruit is the most famous. Pomelo is usually mistaken for grapefruit, but apart from the fact that they are both citrus fruits rich in vitamin C, they have nothing more common. Grapefruit is a hybrid made of pomelo and sweet orange.

As a matter of fact, pomelo, citron, mandarin, and papeda are the original citruses from which the rest of the citrus fruits have been hybridized!

While pomelo is a separate species, yuzu is a cross between a lemon and orange. Yuzu (Citrus Junos) looks similar to Mandarin orange. This small and round citrus fruit is intensely aromatic and has bumpy skin.

Interestingly, its flesh is so hard that it can’t be eaten as a fruit! Its extraordinary juice has found its purpose and wide application in Japanese cuisine, from giving an extra fragrance to dishes to making honey syrup from it!

Both yuzu and pomelo have similar colors

These two citrus fruits are very similar in color – while pomelo is pale green to yellowish, yuzu is usually yellow-orange. As we already mentioned, yuzu’s flesh is tough, and this is why it can’t be eaten as a fruit. It looks like tougher, thicker lemon.

However, its juice is abundantly used in Japanese dishes to lend an extra sharp zest and fragrance. It has a specific aroma that you can’t get from lemon and limes. Its refreshing flavor and fragrant aroma are less sour than its citrus counterparts, making it a great choice for a marmalade-like syrup. 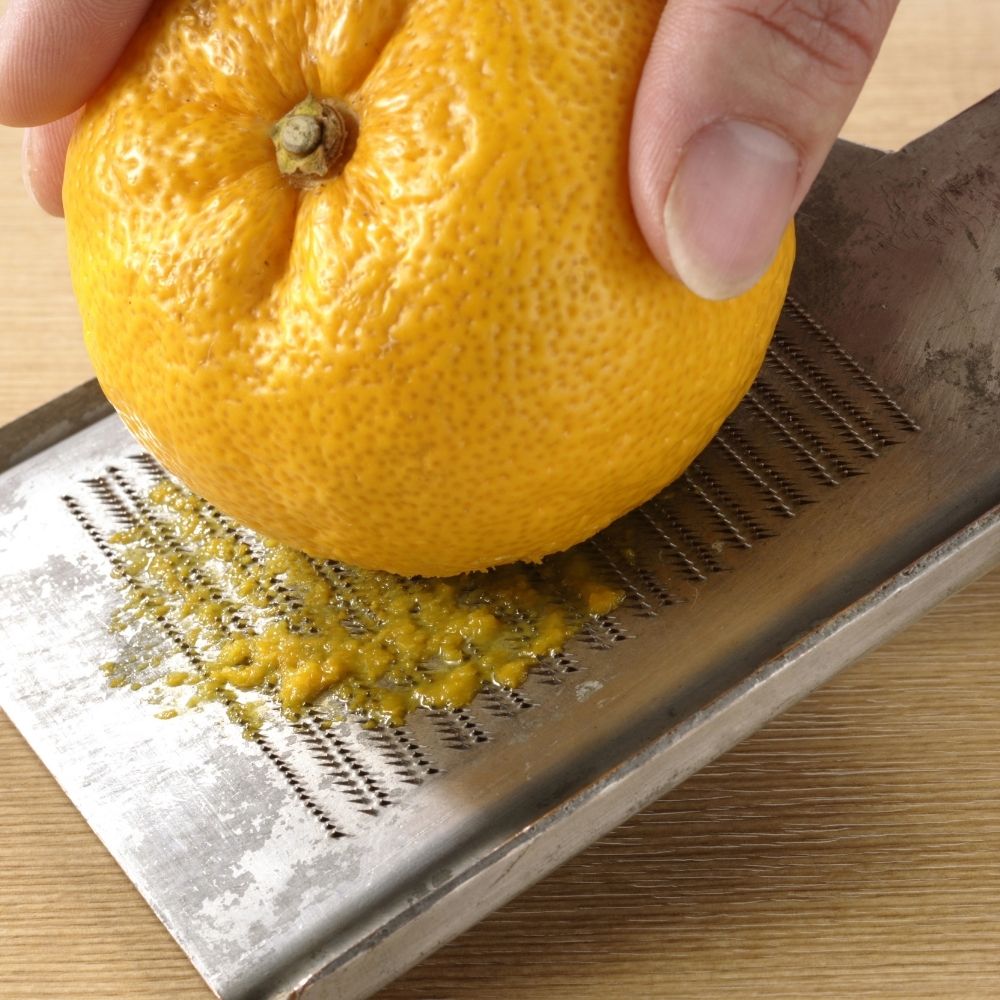 Pomelo is known for its sweet flesh and thick pith, making it the perfect option for salads, fruit dishes, and cocktails. It is very succulent and slightly bitter. People worldwide often utilize its peel to make marmalade. However, the pomelo’s sweet-tart and unique flavor leave no one indifferent!

Yuzu is originally from China

Native from Malaysia and Indonesia, pomelo grows wild and in vast amounts in these places even nowadays! Over time, it has become so popular that people started to cultivate it worldwide, particularly in Israel and California.

It’s presumed that the Chinese cultivated pomelo for thousands of years. They utilized its leaves and skins for ceremonial baths to chase away the evil.

Yuzu is originally from the Yangtze River region in China, where it also grows wild and abundantly. It was introduced to Japan during the Tang Dynasty, where it is predominantly cultivated nowadays. Over time, it became an inseparable part of Japanese cuisine and culture and is used in many festive celebrations throughout Southeast Asia.

Yuzu is the only species that can survive the small temperatures (-9 and -20 C) and harsh winters in north Asia.Today, yuzu is the Japan Nation’s favorite citrus fruit!

Yuzu gama, as the name implies, is a type of food that uses yuzu. You should first cut off the top part of the fruit and then scoop up its interior so that you can put the dish into it. This citrus fruit serves as a bowl giving an extraordinary aroma to the yuzu gama. It’s a dish that is typically served for a Japanese New Year (Oshogatsu).

Yuja Cha is a Korean yuzu tea made of the whole yuzu fruit. To prepare it, you should take out the seeds first, chop the fruit, and mix it with sugar. You will have a pleasant hot beverage on the table in minutes, mainly used as a cold remedy.

Pomelo is most often eaten raw, but it can also be an ideal substitute for other citrus fruits to prepare your meals. Its juice will give your foods a tempting scent and taste. Its flesh is a fantastic choice to prepare salsa, jams, and various marinades. Its peel can be candied and used for a tart treat!

It is widely known that in Japan, people take a famous yuzu bath during the winter solstice. They put the whole fruit into the hot water so that the rind could release its aromatic oils and beautiful fragrance.

It is believed that essential oil extracted from yuzu rind is healing, stimulates blood flow, and helps in body relaxation. In Japan, the purification rituals are a must-have to repel evil and invoke happiness. According to legend, everyone who takes a yuzu bath on the winter solstice day won’t catch a cold and will be healthy all year round.

In China, people also believe in pomelo’s healing properties. According to legend, it was an indispensable part of their bath rituals. They used to boil the pomelo’s skins and the leaves to prepare a ceremonial bath to cleanse a person from evil and bring good luck.

It is believed that pomelo leaves cleanse a person who takes a pomelo bath because they belong to the sacred pomelo tree. According to Chinese culture, a person attending a funeral should soak in a pomelo bath to keep bad spirits away!

In modern European cuisines, people often utilize yuzu in the seafood marinade or meat, as a lime replacement in cocktails, as a lemon substitute in desserts, and to give an extra fragrance to their salads. Besides, yuzu is also utilized in preparing mayonnaise and salsa!

Regarding pomelo, apart from the edible fruit, the rest of the tree also serves many purposes. For example, pomelo acts as a natural air freshener. Its leaves can be utilized for aromatic baths, and essential oils can be extracted from its flowers. And, of course, it can be used in refreshing beverages and cocktails.