If you’re just beginning with baking, then you’ve certainly come across puff pastry. Not only is it a common item, but there’s a lot of talk about it. Is it what croissants are made out of ? If they’re different, can you use one in place of the other ? How are they different ?

Well today we’re going to settle the fact that, yes, they’re two different doughs, and discuss the fine details that make up their differences. 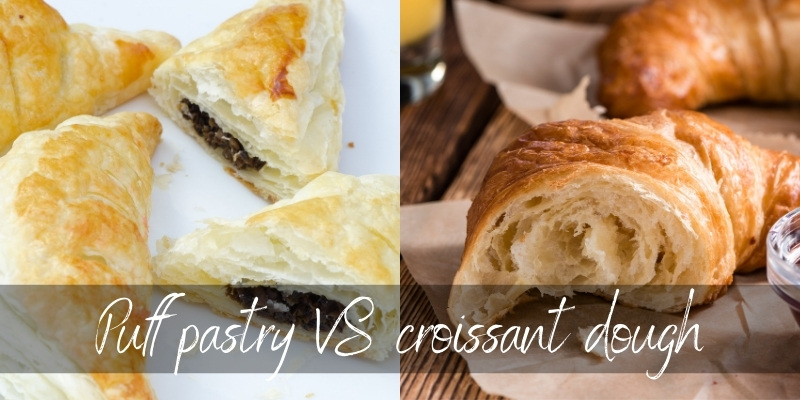 Puff pastries are drier, leaner dough while croissant dough is more gummy and rises differently. Where a puff pastry rises due to steam between each layer, a croissant also relies on yeast.

This also brings a significant difference in flavor. A croissant has more complex flavor because of the yeast. This of the difference between bread dough and pie crust.

And finally, croissants require proofing and you can do much more with a dough rectangles. A small square rolled up will double in size. as opposed to a puff pastry that is only going to puff upwards. Let’s explain all of this in more detail so we’re all on the same page.

Croissant dough has yeast in it

Starting with the yeast in a croissant dough. This is probably the biggest difference between puff pastries and croissants because it affects so much. It makes the dough double in size, it makes it more gummy and helps form not-so-dry layers, and also helps the bottom cook through and not get soggy. 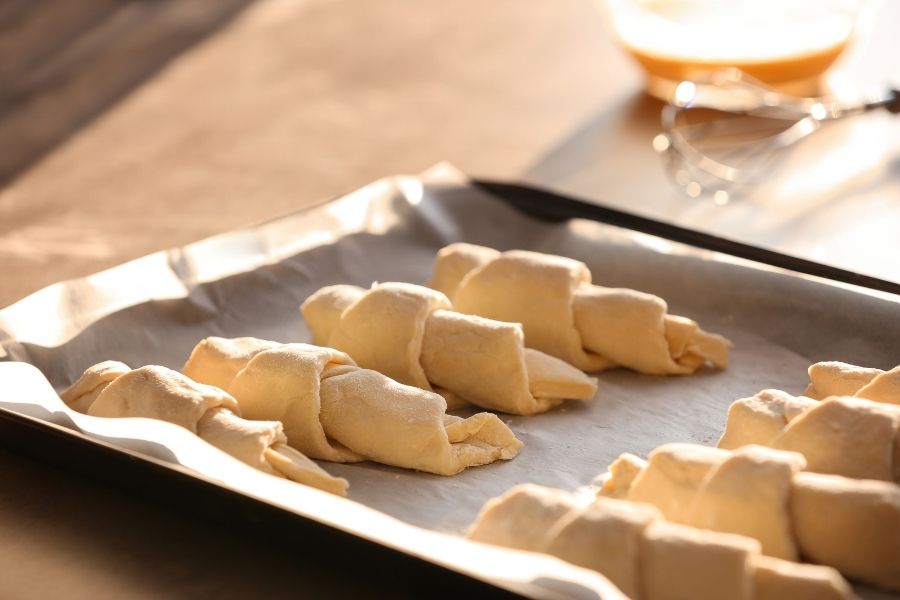 On the other hand, puff pastry is simpler and has no yeast. It’s a laminated dough just like croissant, but it relies on the steam (water in the dough) to puff up, whereas croissants also use yeast.

Because of this the overall texture is dry. And it only means the pastry will get biggest by going up, because the steam can only get between the layers and this is not an elastic dough at all. The size you make your pastries is the size they will be, so you don’t need to place them several inches apart to account for wider, taller pastries.

Puff pastry will get a soggy bottom

The soggy bottom is a real problem when it comes to puff pastry. It’s something that can be avoided by blind baking (and docking), but if you’re buying pre-made pastries it’s hard to avoid.

The problem is that puff pastry cooks through only when it gets relatively dry. A moist filling will release steam and will keep the inside and bottom perfectly soft and even soggy.

You can try avoiding this by lacing the pastry to bake on a wire cooling rack, assuming it’s got enough wire to keep the pastry from falling. This way air will circulate under the bottom as well. But you need to do one more thing. You need to create a couple of holes through the top layer, all the way down to the filling. Don’t prick the bottom layer !

This way the steam from the filling will release and the inside will be able to cook through. It’s amazingly complicated so it may be a better idea to just buy pre-made puff pastry dough, blind bake it, then fill with whatever you want.

Puff pastry is the easier, cheaper version of croissant dough

Which you make or buy depends on a few things, but it’s a combination of how much work you want to put in and how much you want to spend. Croissant doughs are a little more expensive than puff pastry, and if you’re making it at home it requires more care. 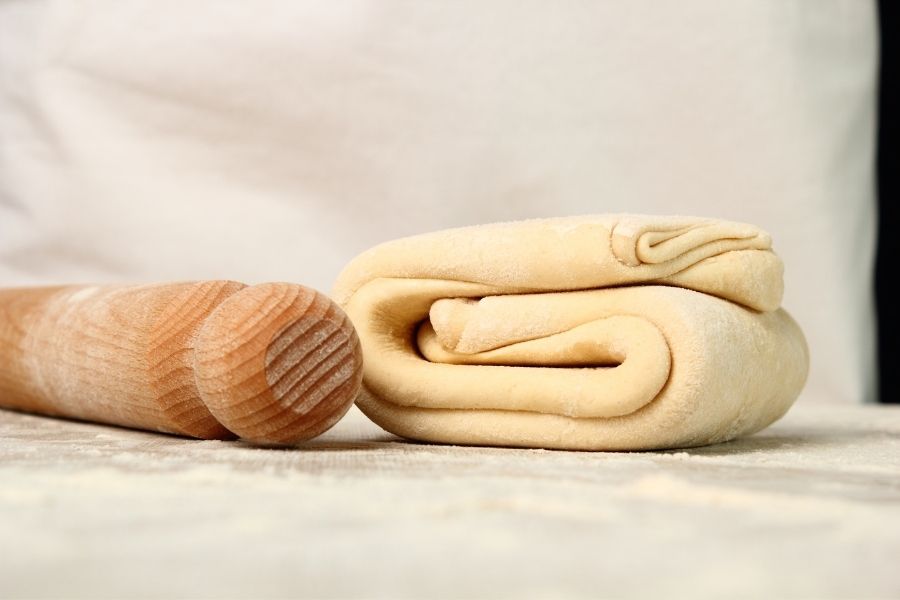 Yeast makes dough rise, and it cannot be kept in a warm place if you’re going to keep rolling and folding and rolling again. And if you’re just beginning with baking, it might be best to start with puff pastry.

If you mess it up it’s not that expensive to replace, and you get to understand the concept of leaving space between pastries. They don’t get as big as croissants, but they’re a good starting point.

Because of the way the yeast interacts with the rest of the dough, croissants simply taste better, more complex. Both croissants and puff pastry contain butter between those dozens of sheets. But there’s just something about yeast doughs that adds extra dimension to flavors.

They’re a bit salty and umami, even when sweet. Much like a donut, except it’s got layers and layers of butter.

There’s also the fact that many puff pastries are made with margarine, which tastes… well, it’s not butter and we absolutely love butter. But if you’re vegan and find margarine puff pastries they’re right up your alley.

Can I use croissant dough instead of puff pastry ?

You can use croissant dough instead of puff pastry, but you have to allow for sizing up. Croissant dough will double in size, and you need to let it proof to get to that point.

If you don’t and just pop them in the hot oven, you’ll get this one, big empty chamber on the top, and then the rest of the dough will be all weird. Please let yeast doughs proof so they can get a nice, even bubble structure going.

And if you were wondering if you can use puff pastry instead of croissant dough, it’s not as great. The main problem is the soggy bottom, and the fact that it won’t really be as majestic as a croissant dough.

Can I use phyllo instead of puff pastry ?

Phyllo (or filo) is fairly similar to puff pastry, in fact it’s the precursor ! But they behave differently and we don’t recommend switching one for the other, as we’ve tried this and the taste and texture are very different.

First, phyllo is a collection of plain dough sheets that need something like butter or oil slathered between each and every one of them. It can and will fluff up, but it will end up as a crispy, thick stack of sheets that will only get a little thicker. There won’t be as much steam between the layers, so it will not puff up the same way as a puff pastry.

It will also end up chewier, as the layers are thicker than puff pastry. Phyllo is amazing for baklava, or a pastry with dozens of thin layers of filling.

As for using puff pastry in place of phyllo, it won’t bring you the same result. In short it’s best to just try and get puff pastry for puff pastry, and phyllo for phyllo.