Bagels are the go-to breakfast bread for more and more people, and they’re spread all over the world in slightly different versions. What isn’t different is how much people love them, especially their chewy bite and how well they seem to go with just anything.

So, maybe you’ve fallen in love with bagels so much you want to make your own at home. Great ! Only there’s a step that might be throwing you for a loop, and that is quickly boiling the bagels before baking them. What ? Apparently that’s a thing, and we’ll explain why and how it works, so let’s start. 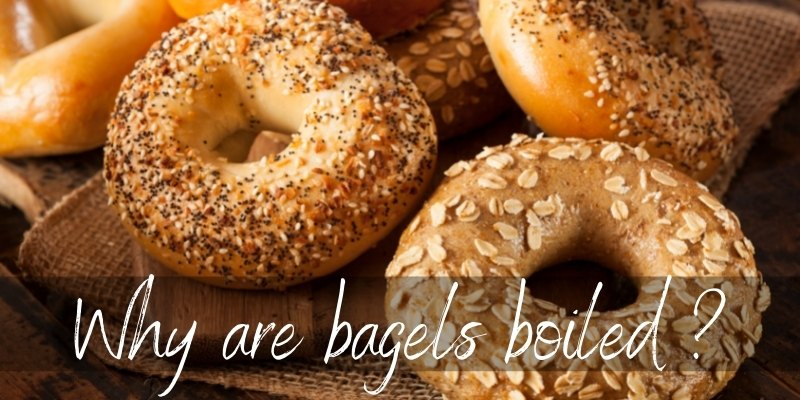 Table Of Content show
1 Why are bagels boiled ?
1.1 The crust makes the bagels chewy
1.2 The flour you use for bagels matters
2 Can you make bagels without boiling them ?
3 How do I know when bagels are ready to boil ?
4 Why did my bagels deflate ?
5 Do bagels rise after boiling ?
6 How do you make the bagel hole ?

Why are bagels boiled ?

Bagels are quickly boiled (40-60 seconds) before baking in order to create a crust on the outside. This happens because the starch on the outside of the bagel forms a sort of gel barrier when it absorbs water, and once you put the bagels in the oven that barrier becomes the crispy crust.

More boiling means a thicker crust, less boiling means a softer crust. You can play around with this to get the perfect bagel for your tastes. Don’t worry about the bagel becoming waterlogged. When the hot water touches the starch on the outside of the bagel that gel barrier does not allow any water to soak into the rest of the bagel.

The crust makes the bagels chewy

Because that perfect crust forms a barrier, and a fairly rigid one at that, the result is that the inside of the bagel is chewy, in a good way. Since the crust does not allow bagels to rise too much while they bake, the dough on the inside simply cooks through in its current form.

Bagels are loaves precisely because of their crust and chewy texture. But if you’d like a softer bagel, you can simply boil it for less time so it forms less of a crust. This will yield a bagel that rises a little during baking and it won’t be as chewy.

The flour you use for bagels matters

If you’re aiming for a gluten-free bagel there are plenty of recipes, though you still have to boil them before baking, otherwise you won’t get that nice crust going.

Can you make bagels without boiling them ?

No, bagels without boiling are not really bagels. The dough used for bagels can easily be used for any other bread. It’s the cooking technique that really makes bagels stand out. Otherwise they’d be just another loaf of bread, but with a hole in the middle.

Lightly brushing bagels with an egg wash does give them a crust, indeed, but it’s not the same as the crust made through boiling.

Boiling bagels is an extra step, we’re aware, but it gets you the necessary texture. If you’re afraid of getting overly crispy bagels, don’t be. You can simply mitigate this by boiling them for a shorter time.

How do I know when bagels are ready to boil ?

You’ll know the bagel dough is ready to boil when it’s done proofing. This means you’ve shaped the bagels and laid them to rest on the counter, until they’ve doubled in size. if you’re not sure, pinch a big of dough off one bagel, roll it into a ball, and dunk it into some water. If it floats, it’s ready to boil. If it sinks, let the dough proof a bit more. 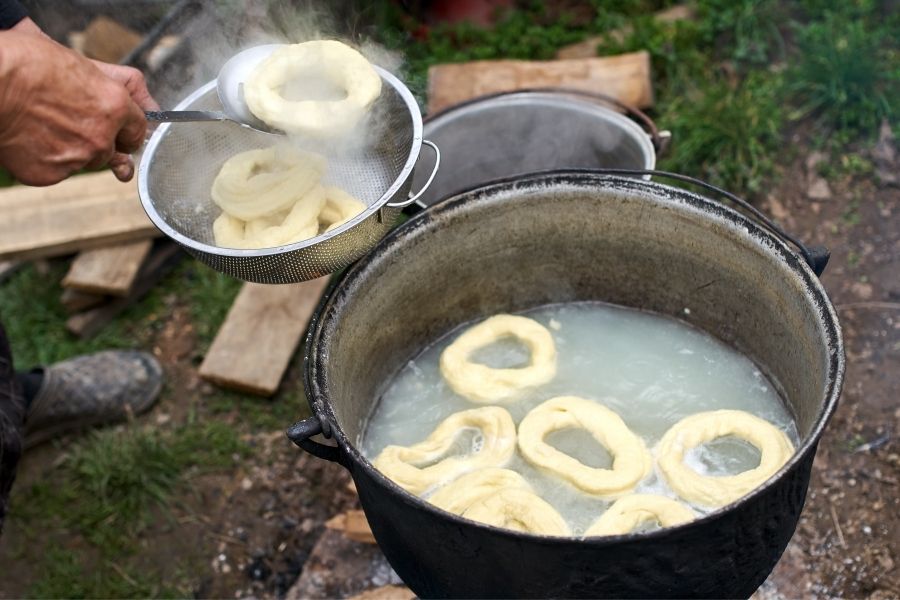 Why did my bagels deflate ?

Bagels can deflate if you proof them for too long, or if you haven’t kneaded the dough long enough. Either case leads to an uneven buildup of CO2 bubbles, and they eventually get released and escape. This leads to those saggy, deflated bagels.

Do bagels rise after boiling ?

Bagels may rise after boiling if you did not boil them for too long. A 30 second boil will yield a softer crust than a 60 second boil, to this leaves the crust elastic enough for the bagels to rise.

If you boil the bagels for longer, the crust will be strong enough to prevent the bagels from getting any bigger.

In any case you should proof your bagels before you even dunk them in boiling water. This way they’re already risen, and they won’t be dense, hard bagels. Instead they will be chewy and slightly springy.

How do you make the bagel hole ?

The bagel hole has a tendency to snap back if you make it too small. So the best thing to do is to make a ball a dough slightly smaller than the overall size of the bagel you want. The push your thumb right through the middle of that ball, until you reach the other side.

With the fingers from both hands, work your way around the bagel hole and lightly stretch it all around. Don’t stretch too far, because then it turns into a bagel than is too thin. The average hole in a bagel is about an inch wide, sometimes slightly less.

Keep in mind the bagel will double in size as it proofs. By the time it’s done proofing the hole should not be closed. And once you boil the bagel it will keep its shape because of the crust.