Donuts seem  to be delicious for just about anyone, and this means just about anyone’s had a few donuts in their lifetime. And one thing you may have noticed about donuts, regardless of glaze or filling, is that they often have a gaping hole in the middle.

Why do donuts have holes, and do they really need them ? Do they cook better ? Is it a weird cost-reducing trick ? How do you even fill a donut ? All this and more, coming right up. 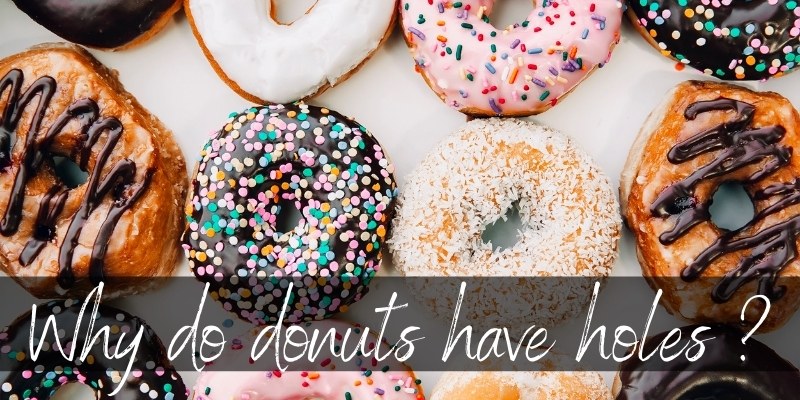 Why do donuts have holes ?

Donuts have holes in order to cook through evenly, without puffing up in the middle. This way, the donuts keep the same texture all-around the ring, and they’re also much easier to flip and then fish out of the frying oil.

There are donuts without holes, though they tend to have a gaping hole near the top as CO2 is suddenly released by the yeast, leading to an empty dome inside the donut. These donuts are also great-tasting, but they’re not the ones most people prefer.

And after all, the people know what they want. Donuts have always been portrayed as rings of dough, so most times donuts will be presented with a hole.

Do donuts need a hole in the middle ?

No, donuts don’t 100% need the hole in the middle but it helps greatly during the cooking process. A donut with a hole is more likely to cook evenly, especially if it’s a wide donut.

Smaller donuts, like dough balls, don’t really need a hole in the middle because they’re mall enough so they don’t puff up in the middle. In short, donuts do need that hole to cook evenly but you can still get a perfectly good donut even without the hole.

Donuts without holes are almost always served filled, with things such as jelly or custard or even chocolate. An example of such donuts are the French beignets.

Read also: Why Are Bagels Boiled ?

Why are donuts round ?

Donuts are round so they cook evenly all around. Much like a pie or a pizza, a round shape ensures there are no hard edges and sharp corners that could fry or dry out by the time the middle of the dough is cooked.

Another reason for round donuts is that it’s easier to make a round shape, since often you don’t even need a cookie cutter. If you have a coffee cup with edges that are fairly thin, you can press your own donuts, and then remove the middle with something like a bottle cap.

Of course, this doesn’t mean you can’t make your donuts into other shapes. Square or triangle donuts will have crispier edges, but if that’s what you’re looking for then you’re definitely going to love those shapes.

How do you fill a donut ?

The usual way to fill a donut is to fill a piping bag, and simply insert the tip into the middle of the donut and gently squeeze in the filling. You’ll know to stop when the filling starts to come out around the edges. You have to be gentle and slow about it, otherwise you risk bursting the donut.

Ring donuts are filled the same way, but with multiple filling points. This means the amount of filling is evenly dispersed throughout the donut, because each insertion only has a little filling.

If you’re doing this at home, filling ring donuts will be more time-consuming than filling beignets or whole donuts.

Where does the filling go in a donut ?

When a donut cooks, it creates an intricate matrix if holes and small tunnels within itself. Sometimes there is a particularly large hole in the middle of the donut, if it’s a single whole donut.

The filling you choose will fill as many empty spaces within the donut as it can reach, and when it can’t go any further it will start to back up. You will notice the filling coming back around the piping nozzle. That’s when you know to stop, because you’ve filled as much of the donut as you can. 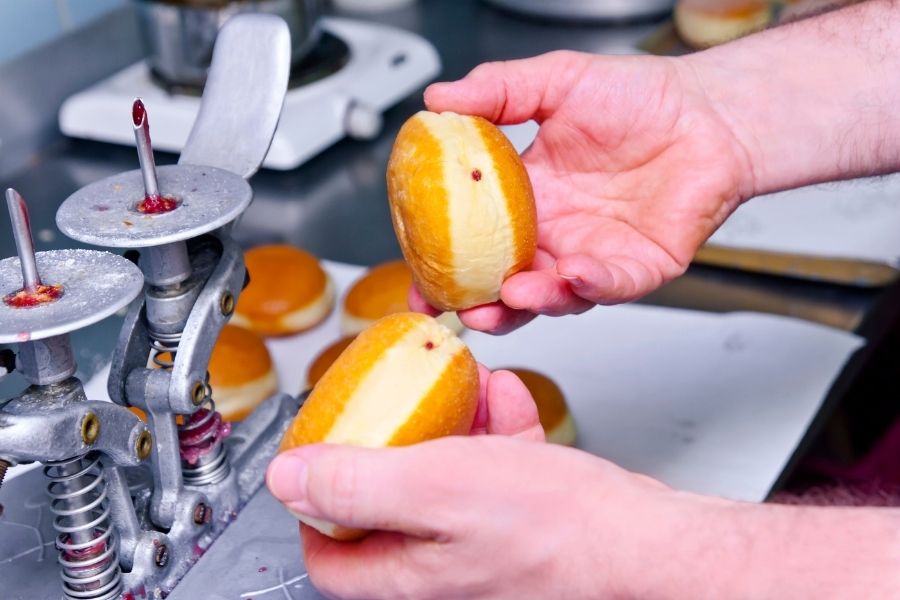 What is the most popular donut ?

By far the most popular donut is the simple glazed donut. The donut dough is standard, and the glazed one is made with icing sugar and milk. These are the sticky, delicious donuts that you will always see both in movies and in real life.

If you want to glaze your donuts instead of filling them, you can easily do this at home. With a batch of freshly fried donuts, all you need is the glaze mix. You need 1:3 milk to icing sugar, and you can add some vanilla into that if you want. The less milk you add, the thicker the glazing. The more milk the runnier the glaze. Always make sure to mix the milk with sugar until it completely dissolves.

The second-most popular donuts after glazed are the Boston cream donuts. These are whole donuts, filled with vanilla custard and glazed with a very generous layer of chocolate ganache. In a way they’re similar to an eclair, except they’re a bit sturdier.

And that’s it, now you have a donut craving and you’ve got us to blame. Donuts really are a treat and we find it incredible you can get so many different flavors. If you’re making your own at home, there’s no one stopping you from making each one a different flavor if you like.