If you’re in love with olive oil and use it extensively you’re definitely well acquainted with its price. Depending on the grade it can be reasonable or it can sting your pocket, especially if you go through a lot. And then there are different brands selling the same grade of olive oil, at significantly different prices. What gives ?

Why is olive oil so expensive ? And is extra virgin olive oil worth the splurge ? Let’s take a look. 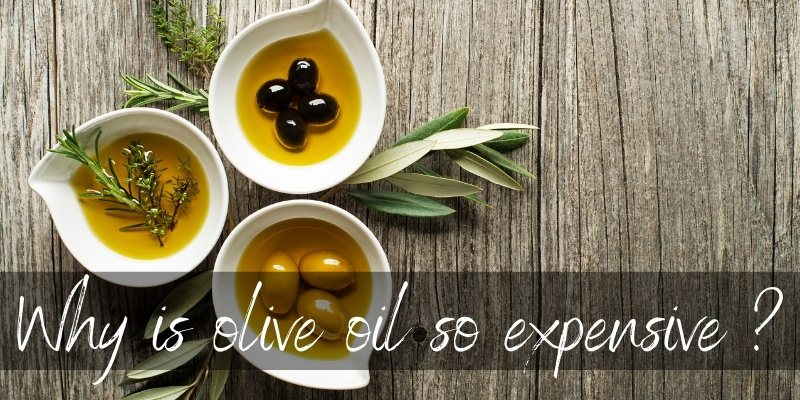 Table Of Content show
1 Why is olive oil so expensive ?
1.1 1. Most olives have to be imported
1.2 2. Olives used for oil could’ve been used for food
1.3 3. Cold-press olive oil uses a large amount of olives
1.4 4. Most olive orchards cannot employ machines
1.5 5. Olive oil quality can be haphazard
2 Refined olive oil is a cheaper alternative

Why is olive oil so expensive ?

Olive oil is expensive in part because olive farming is expensive, and in part because the olives could be fermented and sold as food instead. Most olives grow along the Mediterranean coast, and olives often have to be imported from there. A lot of olives go into making a single kilogram of olive oil – about 10 kilograms, to be exact.

To top all this off, olive oil has always been viewed as a precious, delicious oil because of its taste and color. So it starts at a higher price by default. Actually let’s take a closer look at all the factors that make good olive oil as expensive as it is.

1. Most olives have to be imported

The world’s biggest olive producers are Spain, Greece, Italy, Turkey, and Morocco. There are olive farms in the Americas, but they produce much less.

And the biggest olive oil producers ? Spain, Italy, Tunisia, Greece, Turkey, and Morocco. This means that if you’re from America, your olive oil is either imported, or made in America with imported olives.

This all makes the price for olive oil very, very high if you’re not in a country that actively farms and produces it. Import fees, middlemen, different taxes, and the markups from different supermarkets make olive oil much more expensive than it was shipped.

2. Olives used for oil could’ve been used for food

Olives used for olive oil cannot be used in other ways, not any longer. These are fresh, raw olives that are ground to a pulp, and then pressed to bring out all the oil. This results on tons of leftover olive mush that cannot really be used in any way after being processed. This is something the European Union is looking to change, because a lot of waste is generated this way.

Cold press olive oil really needs a lot of actual olives ! How many ? Well 1kg of olive oil needs 9-11kgs of olive fruit. That’s the yield of several trees combined. Olives are very fatty fruits, but you won’t get a whole tablespoon of olive oil from a single olive.

Couple this with the amount of waste resulted from processing olives, and you get another glimpse into why olive oil can get so expensive.

Olives are small, fussy little fruit. Shaking an olive tree to bring down all the olives sounds nice, but for most farms it doesn’t work. You see, olives grow very well in rocky, tall places. This results in very few farms actually being present in flat plains, most of them are along hills, at an angle.

You cannot bring any machinery up there simply because it’s impossible to maneuver if it’s not a flat surface. So in most countries (about 80% of farms) olives are picked by hand. Manual labor is always expensive, at least more expensive than running a machine. So, olives will be sold and processed for a higher price, to cover all the workers’ salaries. 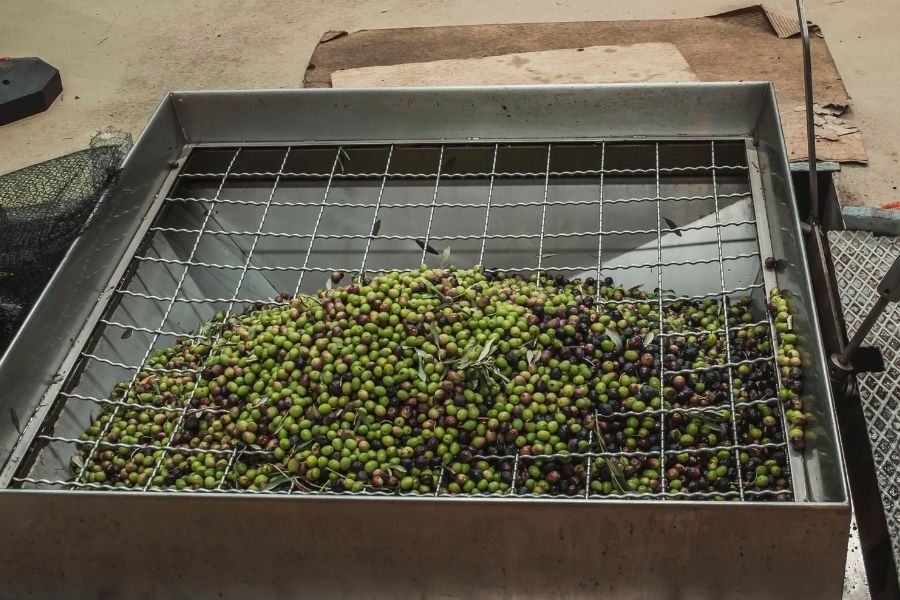 5. Olive oil quality can be haphazard

Olive oil comes in different grades. You’ve got extra virgin olive oil, virgin, refined, and finally olive pomace oil. The best olive oil is made from perfectly ripe olives, and each olive cultivar comes with its own hue and flavor in the oil.

In cheap factories, even the extra virgin olive oil may taste a bit off, because it’s made with a mix of different cultivars of different ripeness. An olive oil made exclusively from one cultivar results in a beautiful, specific color with its own flavor, distinct from other oils.

So olive oil producers have two options: let different farmers process various cultivars and ripeness levels together, all in the same batch, and take a cut from the earnings. Or, contract with a specific farm for a specific cultivar and ripeness level, and have a higher quality.

The first option means mass production, varying quality, no way to trace the olive itself, a bland flavor. But it also means lots of olive oil bottles shipped and sold around the world.

The second option may produce less, but it produces generally better olive oil. This always comes with a higher price.

And guess what ? Both can be labeled extra virgin olive oil, maybe even have a bio label. And you’d get significantly different oils, simply due to production. Extra virgin olive oil is not a protected label, so you shouldn’t guide yourself just by that.

If you’re still in the market for a bottle of olive oil specifically, you can get refined olive oil. That is virgin olive oil that has been refined through solvents and filters to remove all but 0.3% of the free acids (usually just oleuropein). It’s not bitter, it has a high smoke point (240 C/ 465 F), but it also loses most of its flavor because it loses most of its polyphenols.

But it’s still something, if you’re looking for olive oil and nothing else.