Cheesecake seems to be everyone’s favorite dessert, but there seems to be a disagreement over how to make a cheesecake in the first place. The original cheesecake was the baked one, and it’s the one most people grew up with. Then, at some point, no-bake cheesecake came around, along with springform pans. And now everyone debated whether they should go bake or no-bake for this weekend’s cheesecake.

Well, today we’re going to take a look at the main differences between baked and no bake cheesecake. Than we’ll give you some tips on how to make sure your cheesecakes always end up great. 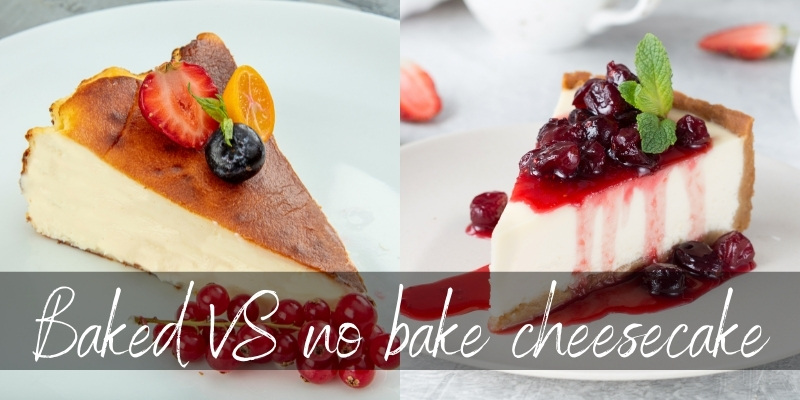 Bake vs no bake cheesecake

The main differences between baked and no bake cheesecake is in the ingredients, as well as the method of cooking. Baked cheesecake contains eggs, and it relies on them to give a rich, creamy, and sometimes airy texture. And it needs to be baked because it has eggs, and they need heat to fluff up.

No bake cheesecake is more beginner friendly, requires no eggs, and can simply be set in the fridge overnight. It needs no heat, but it may not be as sturdy as a baked cheesecake.

Also if you’re looking to make your cheesecake vegan, a no-bake is easier to adapt than a baked one. Actually let’s take a look at these differences closer.

Baked cheesecake is the original cheesecake, and it comes from a time when fridges weren’t around. So setting something in the fridge was not really an option. Instead, desserts were mostly set in the oven.

If you’re fine with eggs, then baked cheesecake is definitely up your alley. You can tweak the way your cheesecake ends up by changing the eggs. If you’re looking for a rich and dense cheesecake, use just the yolks. 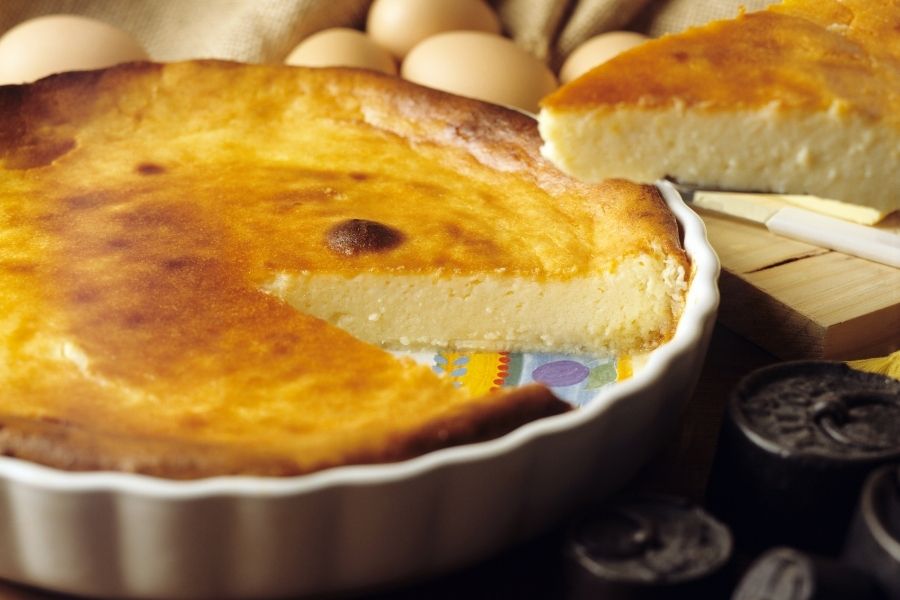 But if you want an airy, fluffy cake make sure to whip the egg whites and fold them into the batter, like when you’re baking a cake layer.

This type of cheesecake relies on the eggs to give it structure and hold its shape. It doesn’t usually have a thick bottom crust, instead it’s a thinner crust.

The overall flavor comes from the baked cream cheese, giving it a pleasantly cheesy yet sweet flavor.

2. No bake cheesecake is easier to make vegan

No bake cheesecake has no eggs at all, and instead relies on the fridge to set it. It has cream cheese and some whipped cream, and butter in the crust.

To make it vegan you can easily swap the butter for coconut butter, and the cream cheese for cashew cream blended with some coconut butter. It will set in the fridge just as beautifully as a regular no bake cheesecake.

When making a baked cheesecake, you need to keep in mind that it can easily crack, just like a souflee. So you need to account for how fragile the eggs can be when baking.

This means you always use a water bath to raise humidity in the oven, especially if it’s a gas oven. This will slow down the rate at which the top of the cheesecake bakes, allowing the middle to cook through before the top is completely dehydrated.

And hot water all around the sides of the cheesecake will ensure you get an even bake throughout the cake, without any burnt edges. They will burn just a bit, but that’s at the very end of the cooking time.

Meanwhile, no bake cheesecake only needs a springform pan to keep it in shape, and then it needs to sit in the fridge for 8 hours or overnight. It’s a simpler, heatless method but yields a different result.

4. No bake cheesecake ends up with a lighter, fresher flavor

Because no bake cheesecake is not baked, and it often has whipped cream folded into the cream cheese, it allows for a lighter flavor. Sometimes even a lighter, fluffier texture than the baked version. 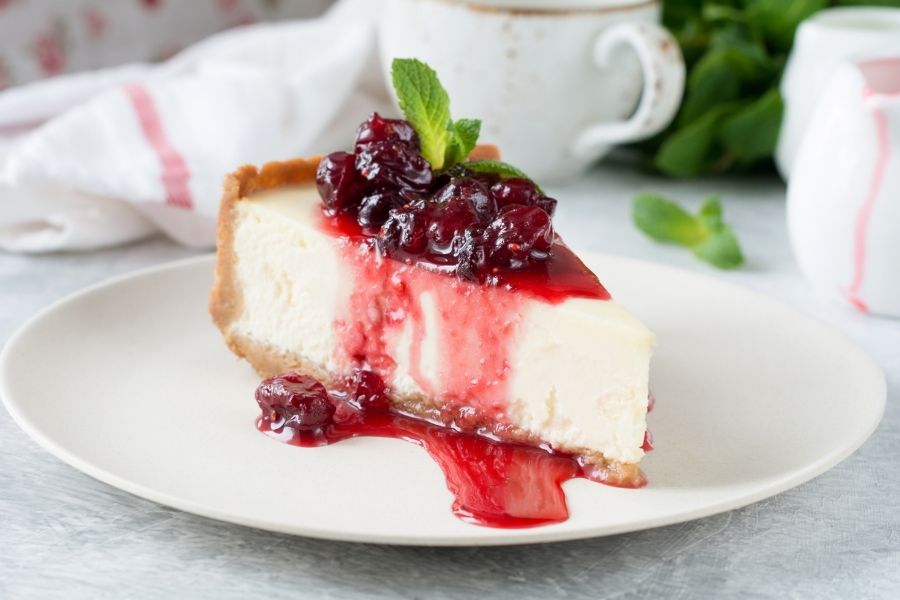 If you’re into lighter, fruity flavors then this works great in your favor. This kind of cheesecake filling is much easier to flavor with a fruit than the baked version, especially if you’re looking for a fresh flavor.

For example some finely grated lemon or lime rind, will give you a whole lot of flavor, as will freshly cut strawberries. You can easily make this cheesecake with a deeper flavor like chocolate or caramel, in two ways. You can either mix it into the filling, or you can add it as a topping, whichever works best for you.

Is baked cheesecake better than no bake ?

No bake cheesecake is easier for beginners and needs less prep time. The hardest thing about it is waiting for it to set, and trying hard not to touch it until then.

Both cheesecakes are sturdy enough to transport, but you may want to lightly freeze the no bake for a couple of hours before you take it anywhere.

So no, neither cheesecake is better than the other. It really comes down to your personal preferences.

Tips on baking the perfect cheesecake

If you’re opting for a baked cheesecake, there are a few things you should keep in mind, to get the perfect bake. By this we mean as few cracks as possible, good texture, and an overall satisfying flavor. So let’s take a look.

1. Whip the egg whites for a lighter texture

A light texture in a baked cheesecake is determined by adding tiny air bubbles, to air out the filling. The only thing that does this is whipped egg whites, to incorporate some air into the filling.

So be sure to use the egg whites as well as the yolks, and stop at semi-soft peaks. Then fold them into the cream cheese as usual.

Don’t go for light cream cheese or zero fat, you’ll get a grainy cheesecake. Instead opt for a full fat cream cheese, to provide you with all the flavor it can muster.

3. Start with a screaming hot oven, then lower the temperature

A very hot oven – as hot as it can go – will initially puff up the mixture (especially the eggs) and make it rise. Lower the temperature as soon as you put in the cheesecake, otherwise it will scorch.

But that initial hot blast is definitely useful in getting a lighter cheesecake that actually puffs a little.

4. Always use a water bath

A water bath will ensure your cheesecake won’t dry out, especially if you’re using a gas oven. You need a roasting pan, and add your cheesecake pan. Make sure to line it with aluminum foil on the outside, to prevent any water from seeing in from the outside.

Then add boiling hot water to the roasting pan, reaching halfway up the sides of the cheesecake pan. Slide into the oven (gently ! use rubber, insulated oven mitts) and bake as usual.

5. Let the cheesecake cool in the oven

Once the cheesecake is done – about 50 minutes in – it should be somewhat jiggly in the middle, like jello. Don’t worry, it will further set as it cools.

Leave the oven door slightly open, or ajar. Don’t open it fully, the colder air will immediately deflate and crack the cheesecake. Let it cool down in the oven until it reaches room temperature, this can take up to 6 hours.

How to get the perfect no bake cheesecake

A no-bake cheesecake seems to be easier to make, and that’s true. But you still need to be careful about a few things, and here’s what you should know.

1. Always allow cheesecake to fully set in the fridge

When you pour that cheesecake filling, allow it to set in the fridge for at least 8 hours, or even better let it set overnight. The cream cheese will thicken a little when exposed to the cold, as will the heavy cream.

And the melted butter you used to keep the bottom layer together will also solidify, leading to a sturdy cheesecake that will actually stay up once you take off the springform.

Oh, and remember to wrap some cling wrap or clear plastic all around the inside of the springform. Then, before serving, remove the plastic lining and you’ve got beautiful, clean edges.

2. Make sure you whip the cream very well

Whipped cream is important, just like whipped egg whites are important. It makes the filling lighter, and makes the whole cheesecake feel lighter in flavor as well. Be sure to whip it very well, to get a good texture going.

Be careful how much of everything you add. Too much whipped cream and your cheesecake will be too soft. Too much cream cheese (or mascarpone) and it will be too dense, and kind of difficult to cut with a spoon.

3. Use two large spatulas to transfer from the pan

Once your cheesecake is set, you may want to transfer it to a nice serving dish. We’re going to assume the cheesecake has set very well, and the bottom is sturdy enough for 3 seconds of lifting. If it’s not, pop the cheesecake in the freezer for an hour and then try again.

In this case you need two thin by wide spatulas, not the very flexible types. Raise your cheesecake a little, and slide the new platter quickly underneath. You may need a second person to help you with this.

And that’s pretty much it ! Baked and no bake cheesecakes are really beautiful desserts, no matter which you decide to make. And both can be decorated in any way you like !