Cheesecakes are a delicious treat in every way you can imagine them. How you make your own cheesecake may be different from your neighbors, but one thing is always the same: the cheese. For newcomers, the very name ‘cheesecake’ may not sound appealing at all. After all, going just by name you expect a cake with a Parmesan or Gouda filling, right ?

Well, cheese is much more complex and cheesecake is actually a sweet dessert. Here’s what’s in it. 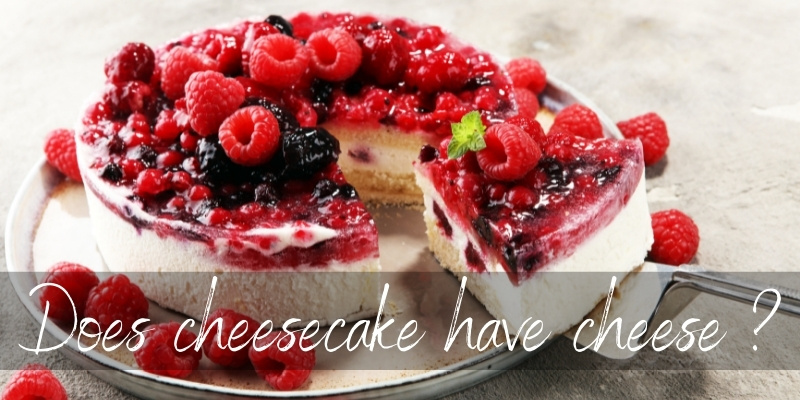 Does cheesecake have cheese ?

Yes, cheesecake has actual cheese in it, in the form of soft, fresh, unsalted cheese. Think cream cheese, ricotta, cottage cheese, and the likes. There is no aged, salty cheese added to cheesecake, though you can tweak a recipe if you want to include it somehow.

Cheesecake’s origin story is highly debatable, with ancient Greeks, Romans, and the Brits all being commonly cited as the original cheesecake inventors. If you’re thinking of the no-bake cheesecake, that is a product of the United States, and it’s a bit different than the baked cheesecake.

What cheese is used in cheesecake ?

Cheesecakes in general (baked or unbaked) require some form of fresh cheese as their filling. The most common one is cream cheese, like Philadelphia cream cheese. It can be used for both versions of cheesecake.

The reason creamy white cheese is used in the first place is because it gives a fresher, lighter taste than aged cheese. And it also has more moisture and remains creamy even after baking, making for a better cheesecake.

Is cream cheese the same as mascarpone ?

No, cream cheese and mascarpone are not the same product. They are both creamy cheeses, but they are made differently.

Mascarpone also uses tartaric acid from wine barrels, or lemon juice to form curds. They are then strained for two days.  Cream cheese requires some thickening and stabilizing agents when made commercially.

Read also: Why Is Butter So Expensive ?

What can I use instead of cream cheese in cheesecake ?

In case you don’t have any cream cheese, or don’t want to use it there are a few options. Which you use depends on how you’re making your cheesecake: baked or unbaked. All of these work great for a no bake cheesecake, but they may not all be great for baked cheesecake. Here are the substitutes.

Ricotta is a type of fine white cheese, similar to cream cheese in that it’s white, fresh, unsalted, and spreadable. But it can be made form different kinds of milk, not just cow’s milk, thus leading to different notes. Where cream cheese is made using milk and cream, traditional ricotta is made from leftover whey, so it has a much, much lower fat content.

This means you’ll have to supplement this in the cheesecake, unless you’re fine with a crumbly texture. It works great for baked and unbaked cheesecakes alike.

In America you may find ricotta made from whole milk, which has a higher fat content than traditional ricotta. The grainy texture is still there.

Cottage cheese and quark are the same food item, and the production process is the same: coagulating cheese curds via lactic acid. The resulting cheese curds still have some leftover whey to keep them all together, so they are not completely drained. And in many cases, a small amount of cream is mixed into the cottage cheese, to give it a smoother flavor.

Even so, it’s a lower fat cheese than cream cheese, but higher in fat than ricotta. Cottage cheese works best for baked cheesecakes.

All three above cheeses follow the same logic: smooth, soft, almost spreadable cheese that is slightly aged, with an edible rind. These result in a high fat cheesecake, with a gooey, oozy kind of filling and they may be a a bit salty in flavor.

These cheeses work very, very well for baked cheesecakes, but not so great for unbaked versions.

Mascarpone is a type of cheese that is closer to heavy cream than it is to cream cheese. Like cream cheese, it is fresh, spreadable, white, and very creamy in flavor. But it has much less tang than cream cheese, and a higher fat content.

Mascarpone is made entirely of heavy cream, while cream cheese is made of cream and milk. Mascarpone works great for baked and unbaked cheesecakes. If doing a no bake cheesecake, keep in mind that the higher fat content of mascarpone will result in a denser, thicker cheesecake filling. Try not to mix it too much with an electric mixer, it can separate. 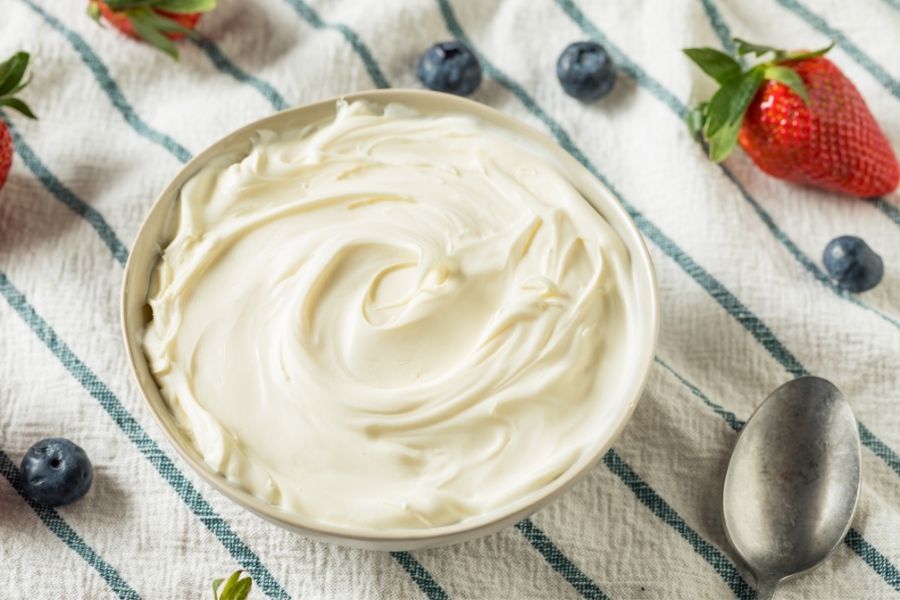 You can make a sort of cheesecake filling with heavy cream, eggs, and a bit of flour, though it would be more like a custard than anything else. This doesn’t work for no bake cheesecakes !

However you may add some heavy cream to an otherwise light cheese on this list, like ricotta.

Tips on getting a lighter, fluffier cheesecake

If you’re aiming for a light and fluffy cheesecake, then there’s hope. Everyone likes their cheesecake in some way or another, but most folks prefer it as a fluffy dessert. So this is what we’re going to take a look at.

Frist we need to understand what makes a cheesecake fluffy. The answer is: what makes everything else fluffy, meaning lots of tiny air bubbles. Each cheesecake type has a different way of incorporating that. So let’s take a look.

If you’re making a no bake cheesecake, you’re going to need whipped cream. You need your cream cheese to be room temperature and soft, easy to mix and fold.

Add some whipped cream, about 1:2 whipped cream to cream chees ratio to get a fluffy texture going. The more whipped cream you add, the fluffier the cheesecake. But once you go past the 1:1 ratio you risk it turning too soft and airy, and it won’t hold together.

Make sure the whipped cream is whipped very, very well. You need the stiffest peaks you can get. The gently fold in some soft cream cheese, and then blend them together with a folding motion until they’re one and the same. You will knock out some air from the whipped cream, but hopefully not all of it.

This also works if you’re using something like mascarpone instead of cream cheese, and it works for ricotta as well.

A baked cheesecake relies on the eggs to hold the filling together, and to give it a bit of rising action while it’s in the oven. What makes it rise is the egg whites, which are proteins and they keep the air bubbles in a sturdy structure as they cook.

So a good way to get more air into this mix is to whip the egg whites separately, and only then fold them into the whipped egg yolks and cream cheese. Again, very stiff peaks, as stiff as you can get them. And just like with whipped cream, some air will be knocked out when you fold them in, but not all of it.

Your cheesecake filling should look pretty fluffy when you pour it into the baking dish, and it will puff up considerably as it bakes. Remember to use a water bath and cool the cheesecake in the oven, with the door ajar.

And that’s pretty much it about cheesecake. It does have cheese in it, but it’s not the kind of cheese you expect. It’s white, fresh, unsalted cheese and it makes for a very light and delicious dessert, despite having the word ‘cheese’ in its name.