Blackberries and mulberries are two similar-looking fruits that manage to confuse people all the time. And for good reason, since they look incredibly similar, taste fairly similar, and they both stain your hands and clothes like crazy.

So what are the main differences between blackberries and mulberries ? This is what we’re going to find out today, so read on ! 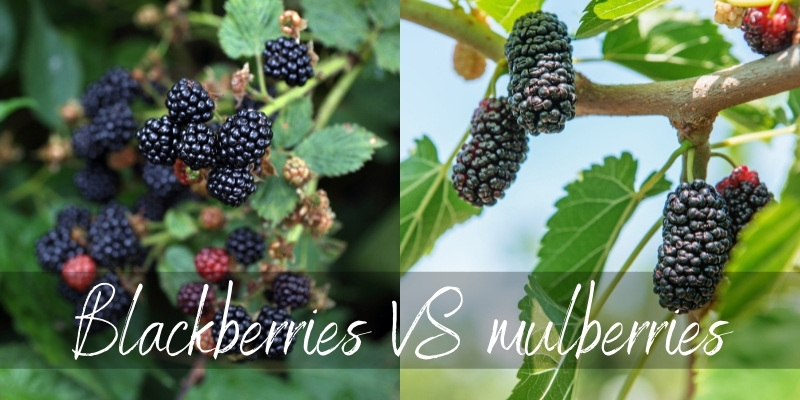 Blackberries are fairly round and small, compared to mulberries which grow in an elongated shape, often reaching an entire inch in length. Blackberries leave their stems on the bush when you pick them, but mulberries keep a part of their stems (like apples).

Where mulberries grow in large, leafy trees blackberries grow in brambles or big, rambling spiky bushes that can quickly overtake an entire garden if not continuously pruned.

Both fruits share a segmented look, though blackberries have an individual cell while mulberry segments are longer and look like they would split in three.

Blackberries are aggregate fruits that are native to Europe and grow in brambles. They belong to the Rosaceae family and the Rubus genus, closely related to raspberries. The wild bushes are often so thickly intertwined one can only pick blackberries from the edge.

Commercial blackberries are larger than wild blackberries, though they lack some of the flavor the wild ones have. Compared to raspberries blackberries come off the bramble without the stem but with the receptacle intact. That is the source for a chewy, bitter part of the blackberry.

Read also: Why Are Berries So Expensive ?

Blackberries are seasonal fruit, and they have a very short shelf life (3-5 days), which is made worse by how fragile they are. They can easily break during transport.

When a blackberry matures, it turns from green to white to yellow, then red, and then a very dark purple (nearly black). Blackberry brambles come back each year and can easily overrun a garden if not pruned back. If you’re thinking of planting one in your backyard we recommend installing a trellis, otherwise the bush will cover the ground and any surrounding trees.

Mulberries are the fruit of leaf-shedding trees native to Southeast Asia, and they come in three versions: white, red, and black. Black mulberries are the most common, and regarded as the original mulberry, and also the one with the most flavor.

These fruits look very similar to blackberries, only they are longer (about an inch), and their segments look more like they’re braided together than aggregated. When mulberries are picked, they come with their receptacle and their stem. And like blackberries, mulberries have a short shelf life and are very fragile.

The black mulberry, the one most people confuse with blackberries, turns from green to white, then red and finally a reddish dark purple. It, too, looks almost black but when put next to a blackberry it has a reddish hue.

Mulberry trees are great to have in a garden, since they provide a lot of shade and they shed their leaves in the cold season, allowing the sun to filter through. Once the fruiting season begins, the ripe fruits simply fall off the tree on their own, and make a dark purple mess on the ground. Under extreme heat the fermenting fruits can give off an unpleasant smell.

Keep in mind that mulberry trees can crack sidewalks and strangle pipes and drains, so plant them away from anything essential. The far back part of your backyard is a good place. 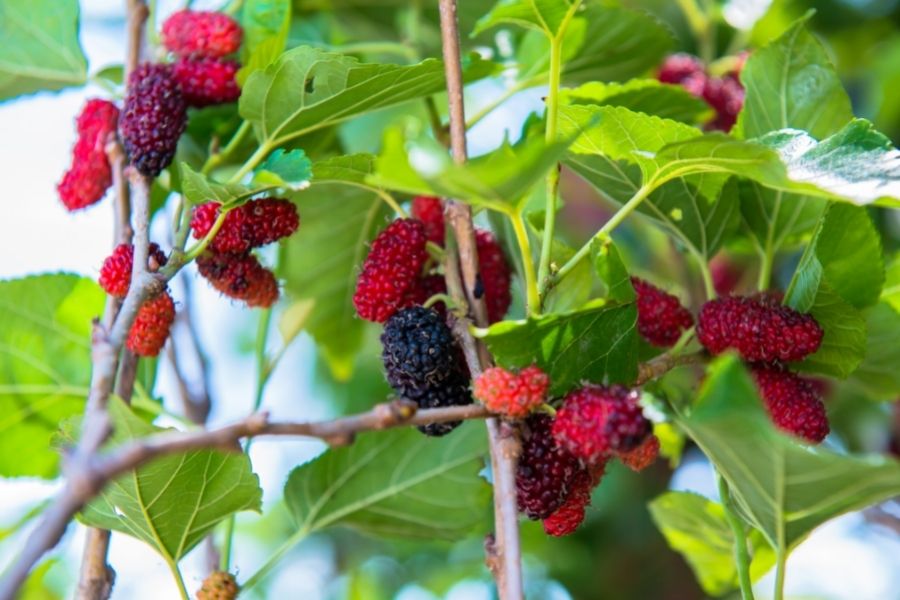 Blackberries are rounder, have no stem

When you look at the two fruits, one of the first things you’ll notice is that blackberries are shorter and rounder than mulberries. Blackberries have a segmented look, though it looks like a bunch of balloons tied together, and they have no green stem.

Meanwhile mulberries are longer, oval, and have a green stem attached. it’s difficult to pick mulberries without the stem, since it’s tightly connected to the receptacle. And because of this, a ripe mulberry is chewier than a ripe blackberry. The spongy receptacle is simply denser than in blackberries.

Mulberries come in different colors, and you can find and buy seeds for all three. The fruits are a little harder to find since they’re not usually sold in stores. But if you’re living somewhere with lots of room to plant trees, a neighbor is likely to have at least one mulberry tree.

You’ll find mulberries in black, red, and white. The red and white ones are not underripe, but they lack in flavor compared to the black ones.

Meanwhile blackberries only come in one color, and that is the deep purple/black ones. Don’t confuse underripe blackberries (red) with raspberries. If you attempt to pick them, the red blackberries won’t come off the plant, they need more time.

One of the key ways to figure out what you’re looking at is whether it’s a bush of a tree. If it’s a rambling, spiky bush it’s a blackberry bramble. It has big, sharp spikes and you should weak protective gear when picking blackberries, or simply accept that your hands and clothes will snag onto all those spikes. 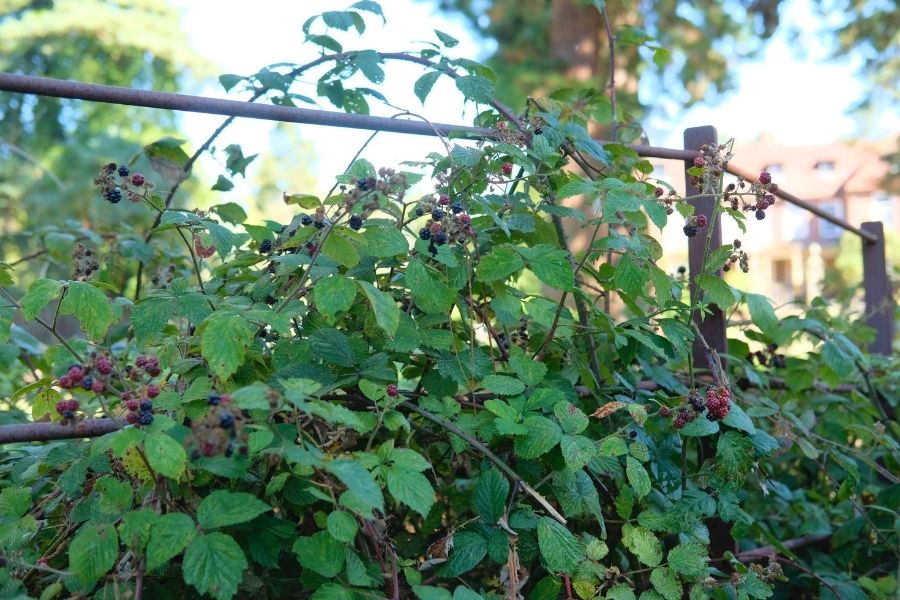 If it’s on a tree, it’s definitely a mulberry and it’s likely a tall tree. Mulberry trees are much friendlier, since they have no spikes, but they will stain everything you love. Blackberries stain too, but not as aggressively and with as much pleasure as mulberries seem to do.

Mulberries tend to have bigger yields

Because mulberry trees grow so fast, they have immense yields. They often produce so much you’re likely not going to be able to pick everything before it falls off the tree. Installing some sort of tarp under the tree may be a good idea to catch all the falling fruit, and to keep the stains from reaching the ground.

Blackberries have significantly fewer fruits compared to mulberries, and they mature as a slower rate. As in, you will fewer mature fruits on the bush each day, that you would on a mulberry tree.

A word on black raspberries

Since blackberries are black and raspberries are red, finding something that looks a lot like a raspberry (no receptacle, ’empty’ inside) and black is confusing. There is such a thing as black raspberries, and they’re a fairly recent and not well known cultivar.

You can tell the difference between black raspberries and blackberries in two ways:

In the end both are delicious and if you’re simply looking to get something that looks like blackberries, these will work just fine.

Can you substitute blackberries for mulberries ?

Mulberries taste berry-like and a bit tart, but don’t have as much flavor as blackberries. So yes, they do taste like blackberries but a much milder version.