Have you ever found yourself on a woodsy trail and were surrounded by big, thorny bushes with red fruits, similar to berries ? If so, then you’ve probably wondered what they are and if they’re edible, and also what do they taste like?

And most probably someone already told you they’re rosehips, but were unsure if you could eat them or not. Rosehips, now where did you hear that before ? Perhaps the rosehip oil that seems to be so popular, or maybe you read it as an ingredient in some teas.

But are rosehips edible ? Well, this is what we’re going to answer today because it’s one of very favorite topics. We grew up picking rosehips, mushrooms, and berries as kids. We lived in a mountain area but these things grow everywhere. 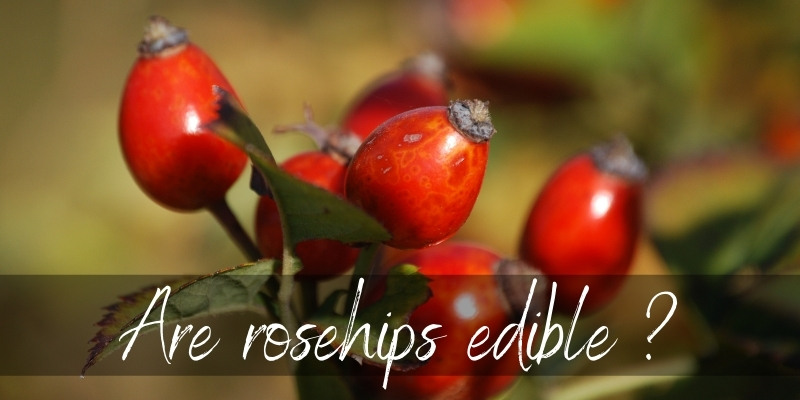 Table Of Content show
1 Is rosehip edible ?
1.1 Rosehip and dog rose
1.2 The ‘hip’ in rosehip
2 What does rosehip taste like ?
2.1 Rosehip jam is one of the best things ever
2.2 Don’t touch the hairs inside the shells
3 Rosehip is very high in vitamin C
4 Do rose hips turn into roses ?
5 When is rosehip in season ?
6 Conclusion

Yes, rosehips are edible and they make the most delicious jam possible. A rosehip is made up of the outer shell and its flesh (edible), seeds on the inside (inedible), and fine hairs that will cause severe itching if you get them all over yourself. The hairs are obviously inedible.

Rosehips are a very common sight in the wild, especially in Europe and North America. You may have a bush growing in your backyard without even realizing. They’re very hardy plants, and survive severe frosts. Actually, rosehips require two incredibly cold winters to start flowering. It’s just the way they work.

You might’ve heard several names for rosehip, and gotten confused. This is a common problem but we’ll clear that up. Rosehips have two names:

Despite the names, it is essentially the same plant and the red fruits are edible indeed.

The ‘hip’ in rosehip

The hip in rosehip is actually the lower part of the flower. It contains the fertilized seeds of the plant, and after the flower wilts, that little berry starts to swell. By the time they’re ripe, they’re bright red to orange.

All roses have a hip, it’s just that the roses we know today – garden roses – are hybrids and don’t develop a hip anymore. We’ll get to that in  a minute.

Rosehips taste a bit like hibiscus, in that they’re a bit sweet, not very tart, and have a slightly grainy, thick consistency. They don’t taste like actual roses, despite rose petals being edible.

They are always cooked, since you can’t really eat raw rosehips. Your best bet to find some is to go hiking and identify a rosehip bush. To be clear, the word rosehip refers to the fruit itself, not the flowers. It’s just the fruit is the easiest to notice.

If you can’t find any in the wild, visit a farmer’s market. You won’t find these in a supermarket, but farmers may have some growing in their garden and are willing to sell some.

Rosehip jam is one of the best things ever

So what can you do with rosehips ? Jam, for the most part. You can also make tea out of the shells and flesh, but really we recommend making jam if it’s the last thing you make. 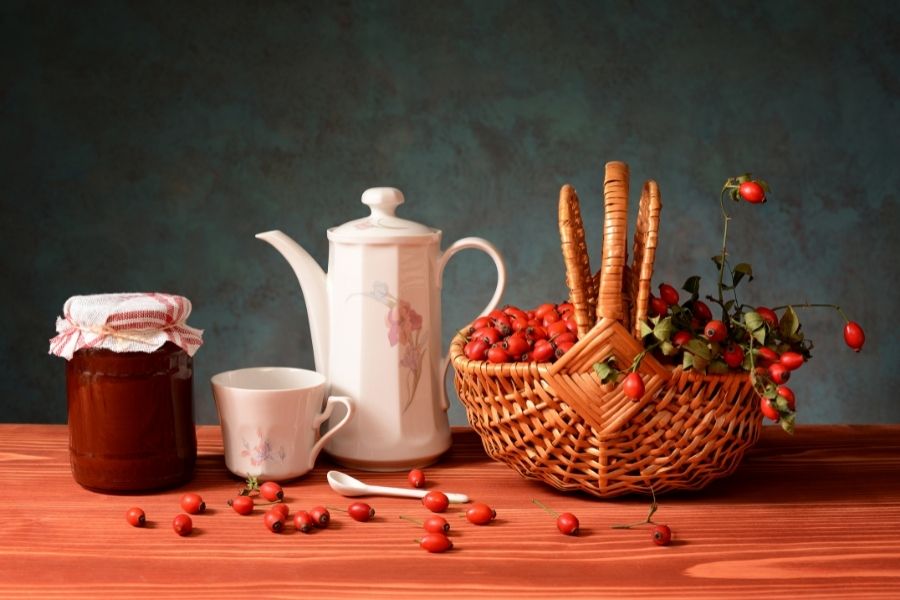 You will need rosehips without hairs and seeds. To remove the hairs and seeds, cut the hips in two and scoop/scrape them with a teaspoon. Wear gloves, and be incredibly patient. This is a time-consuming and tedious job but it’s worth it. Rise in water several times, be absolutely sure there are no hairs or seeds left.

Once the hips are cleaned and you’re only left with the shells, you’ll need to roughly chop the shells into smaller pieces. Traditionally the jam is very smooth, like it’s been run through a blender. This means it has to simmer for a long, long, long time and the pieces have to be small to begin with.

If you don’t have that patience, just get a blender or food processor, and a bit of hot water. Blend the cleaned rosehips until you get a thick paste.

Pour that paste into a sauce pan. For ever pound of raw rosehips you need a pound of sugar. We recommend brown sugar to get the full effect.

Add everything to the sauce pan, and add a bit of water to thin it out. Not too much if you’re not going to simmer it all day. Now, keep in mind rosehips have barely any pectin. This means one of two things.

You either let it thicken as much as it naturally can, and go with the traditional version – about as runny as honey. Or you add some powdered pectin and get a thicker result, but the flavor will be a little different. It’s really up to you can how old school you want to do this.

The rosehip jam should be slightly tangy, molasses-y, sweet, not very acidic. It will end up looking like a burnt red with a slight brown hue. We recommend serving with fresh bread, butter or cream cheese, and a glass of lukewarm milk.

Don’t touch the hairs inside the shells

Let’s explain those hairs a little bit. What are they ? Well we’re not terribly sure but we know they grow all over the outside of each seed. They’re very irritating, and if you were to add the seeds and hairs to the jam you’d have a very itchy, um, mess the next day. The dame way you get a spicy mess after a really hot curry.

In fact those little hairs are well known as the main ingredient in itching powder. We don’t want to explain that one because the potential for mischief it way too high.

A very interesting point about rosehips – they’ve got the highest vitamin C content of anything, ever. Just 100 grams of raw rosehip have 426 mg of vitamin C. For comparison:

And yes you read that right. Rosehips have 8 times more vitamin C than lemons or oranges. Does all of it survive the cooking process ? It turns out not really. Vitamin C is a very sensitive vitamin, it leeches into water and is very heat-sensitive and breaks down.

Still, there’s no proof that rosehip jam has zero vitamin C, since no one has measured it so far. We only know that vitamin C doesn’t survive long cook times that involve water.

Do rose hips turn into roses ?

Wild roses, yes. Not the garden roses one might usually think of. A dog rose has 5 (five) petals, ranging from white to pink and with lots of yellow stamens, containing pollen.

That being said, ornamental roses do have a similar structure to a hip. They just don’t end up developing it, because they never get pollinated since the petals are so many and insects can’t really reach in.

Nearly all ornamental or garden roses are propagated through grafting. This means that a young rose flower is cut from the bush and tied to a cut rose bush. As the plant recovers from the cut, it melds with the rootstock and begins its flowering cycle. Growing roses is actually complicated and maintaining a rose garden is a task on its own.

When is rosehip in season ? 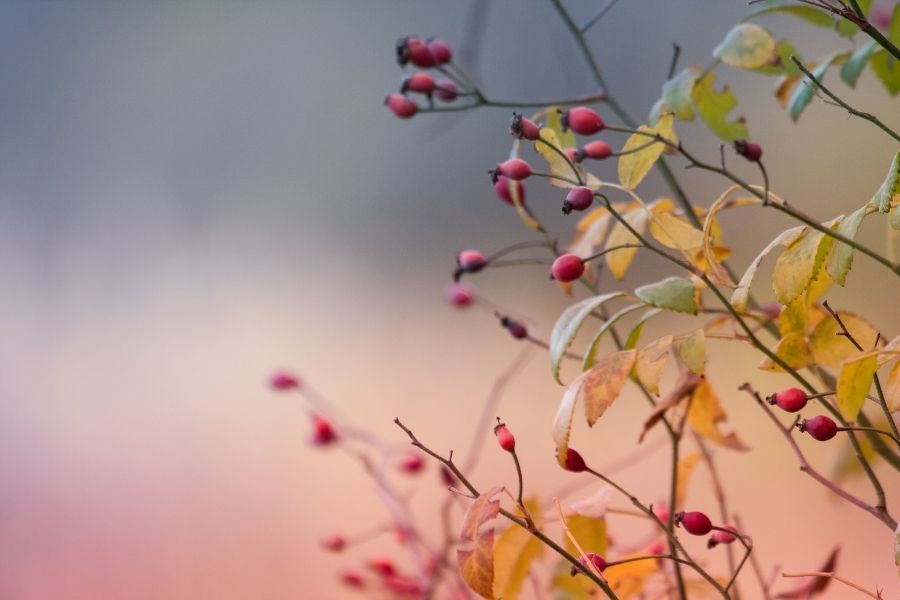 You will see the hips starting to develop as soon as late August, but they shouldn’t really be picked then. If you’re not wearing a hoodie yet, it’s not time.

A ripe rosehip will be slightly soft. Not mushy, nor wrinkled. If you squish it slightly it should give just a little. The mustaches should have fallen off, or be very easily removed. And remember, the beset place to look for them is in your backyard, or a farmer’s market. If you’re looking for pre-made rosehip jam, try a European market.

I hope this article explained to you what to expect when eating rosehip or rosehip jam which we like very much. I know is not the most popular fruit out there but you don’t know what you miss if you don’t try the delicious rosehip jam.