There’s no shortage of fruits in the world, and when it comes to cherries this is even more accurate. Whenever you feel like you have tried all the berries out there a new one will pop up and challenge your taste buds all over again.

And of course some times telling them apart is impossible at first glance. Today’s case is like that, as we take a look at the gooseberry vs ground cherry, trying to tell them apart. 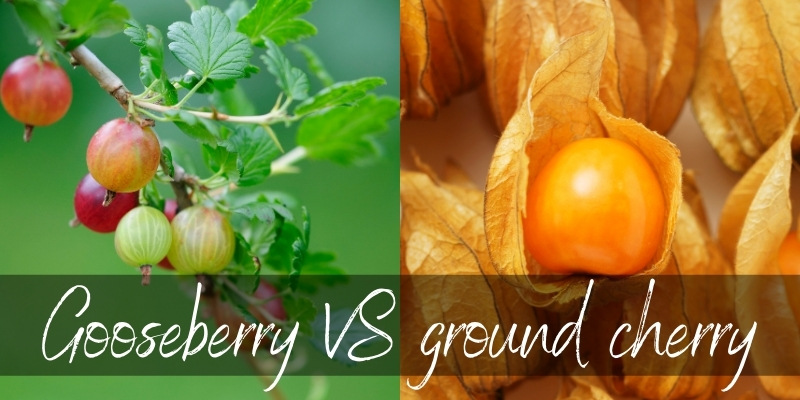 The reason folks are confused is that the word ‘gooseberry‘ can be applied to both types of berry. It’s a really old word commonly used for all kind of small berries, but in the past hundred years it’s been used mostly for the gooseberries we all know.

We should first take a look at what each plant is, so we can then properly compare them.

Read also: When Are Gooseberries Ripe ?

Gooseberries belong to the Grossulariaceae family, specifically the Ribes species, and resemble very round grapes. They’re green and translucent, with lighter colored stipes like a watermelon when underripe. Ripe gooseberries turn either yellow or pink, and remain translucent. They may also have little hairs growing on the outer skin.

These plants can actually grow as tall as a tree, if left to their devices. They’re native to the Northern Hemisphere, but the gooseberries we talk of today are usually found in North America. They’re often lumped together with currants, which is why we’ve also explained those differences.

You have a bigger chance of finding gooseberries for sale than ground cherries. Most of the time, ground cherries have to be imported as they need a very different climate.

What are ground cherries ?

Ground cherries are part of the Solanaceae family, which is the nightshade family. They in the Physalis genus and contain several species. Tomatoes, potatoes, bell peppers, chili, eggplant are all part of that same family, just different genus and species. 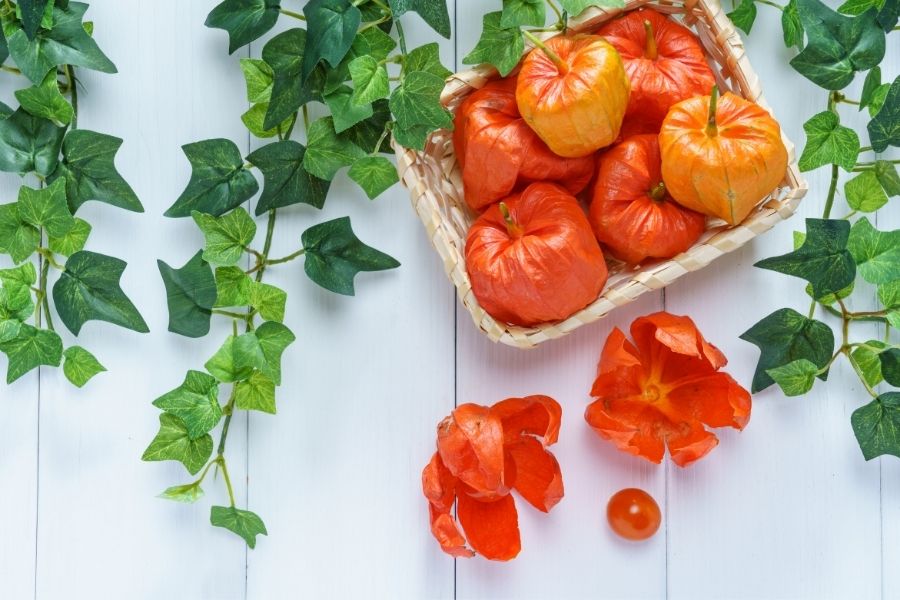 For this reason, you’ll notice ground cherries look a lot like an orange-yellow cherry tomato, even when sliced. These plants are native to warmer climates, like Central and South America, and much of Asia.

This thing is, ground cherries can be anything from tomatillos to Chinese lanterns. All of them have that papery husk growing around the cherry itself, and they’re not always edible. Tomatillos are edible, and are actually a staple of Mexican cuisine.

Chinese lanterns are used mostly as diuretics, and are edible but may not taste great. Cape gooseberries are just like tomatillos, but smaller and a bit more orange.

So in short, ground cherries are several plants that are very similar to one another, but they’re not related to gooseberries, despite sometimes being called that. Now let’s compare gooseberries and ground cherries, so we can have a clearer idea of what we’re talking about.

Gooseberries are native to North America

When it comes to the gooseberry vs ground cherry it would almost be easier to list their similarities than differences. To begin with both species belong to completely different families and genus of plants.

Gooseberries are scientifically known as Ribes and grow in the Northern Hemisphere, particularly in North America. They are easy to grow in most of the United States.

On the other hand ground cherries are part of the Physallis genus and are far more prevalent in subtropical climates, particularly in South and Central America. In fact, almost half of the species are from Mexico, so they only grow naturally there. Ground cherries had to be bought over to North America, making it harder for them to fully ripen on certain plantations.

Both gooseberries and ground cherries are very unique and distinctive fruits. Due to their different needs, they usually won’t be found together on the same plantation or state.

Ground cherries have a papery husk surrounding them

Gooseberries look very different from ground cherries, and the papery husk is one of the biggest differences.

A gooseberry is a lot like a very round grape, translucent, and has lighter stripes like a watermelon. When unripe it’s green, and when ripe it’s ripe it’s a purplish pink.

The outer skin of a gooseberry has some fine hairs, and one end has something similar to a mustache, where the flower used to be attached.

Ground cherries are very different looking. When fully ripe, they’re yellow-orange and completely opaque. They also have a papery husk surrounding the cherry, which starts to wither once the cold season starts. It doesn’t fall off, but remains attached to the berry with only the veins forming a cage-like structure.

In general, ground cherries are larger than gooseberries.

Another important difference is the presence of short spikes on the gooseberry bush. They’re more like thick cactus needles than thorns. Still, they’re very sharp and can cause serious harm when picking the fruits. We recommend using gardening gloves when handling gooseberry plants.

Gooseberries are tart, and a little sweet

As far as flavor goes, they have rather marked differences as well. Gooseberries are similar to sour grapes in flavor, and this intense flavor decreases as the fruit ripens naturally. Ripe gooseberries are less tart and more sweet, mellower. That being said, you can still eat slightly underripe gooseberries or use them in jams. 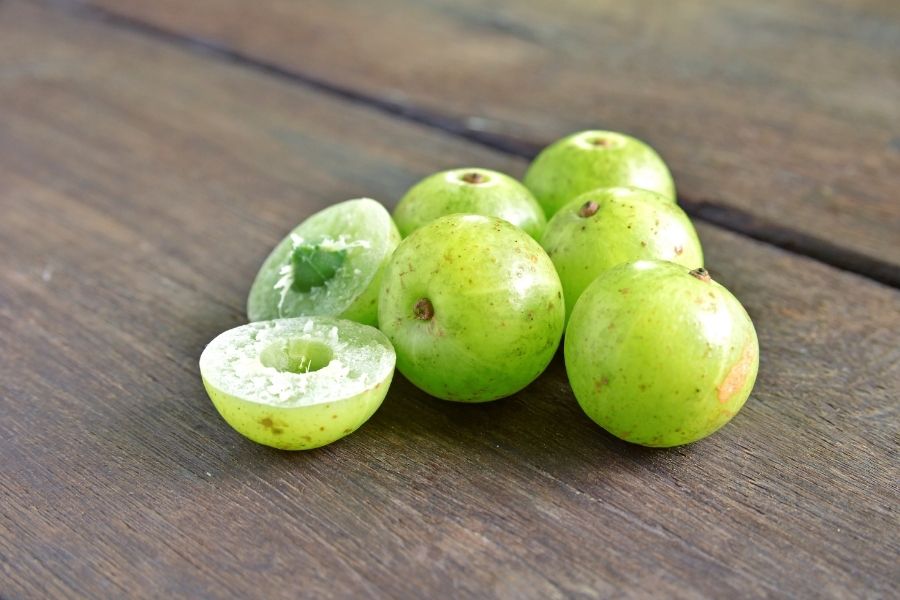 In fact, when shopping for gooseberries you’re more likely to find underripe ones than perfectly ripe ones. This is because they’re very fragile and don’t transport well. So a firmer, underrripe gooseberry will be easier and safer to transport.

On the other hand ground cherries are much sweeter. This is common with many tropical fruits and their flavor is often compared to tomatoes or regular grapes. Before you splurge for a few of these, make sure you taste one to see if you like the flavor.

They’re more common as a pretty garnish, than an actual fruit to munch on.

Read also: How To Store Gooseberries So They Last Longer

Gooseberries used to be illegal

While gooseberries are easy to grow in the United States and most of North America, they aren’t as common as other fruits. Nowadays places like Walmart have made it easier to buy gooseberries locally, and even online businesses like Amazon have started joining on the action.

Farmer markets are usually your best bet to buy less popular fruits. Especially so if you want to find them ripe. Ripe gooseberries are usually hard to find in large stores, while ground cherries will be available at Latino or Asian markets.

While there are more ways to find and grow gooseberries nowadays, this doesn’t mean everybody can simply buy them. As crazy as it might sound the fact is that gooseberries are considered illegal in certain states. This makes raising and selling them illegal too.

Now gooseberries are completely harmless. The fruit is perfectly safe and nothing can happen if you eat them, or at least nothing beyond getting hooked to a new flavor. But the plant itself has one small issue that has made it the bane of pine cultivators all over the nation. The gooseberry plant can carry white pine blister rust, a disease that seriously affects pines and can heavily impact local wood businesses.

As a result many states banned gooseberries around the 20th century to avoid a pine crisis. Today the bans have been toned down considerably, but gooseberries still remain limited in certain states, and Maine keeps up its ban.

So if you have trouble finding the fruit in your area or large online retailer like Amazon reject your purchase then there’s always the possibility that you are in a state where gooseberries are not allowed. Now you know.

Where to use ground cherries or gooseberries

Due to their similar textures but unique flavors recipes for ground cherries and gooseberries can go various ways. If you have a particularly sweet batch of ground cherries then making jam is one of the best options.

A ground cherry jam will be sweet yet light making for a fresh flavor that can be easily added as topping on any dish. Similarly sour gooseberries can be used for a green salsa or even curry. You can use them like tomatoes and they’ll add a great layer of texture and flavor thanks to the sourness.

Ground cherry juice is really popular and common in countries where the fruit is abundant. You might need a colander to filter it down, and based on how rare they are on your area it might not be a juice you can do any day. But properly ripened ground cherries are sweet enough you won’t even need sugar for your juice.

Gooseberries can also be used in chutneys as well. Since being cooked takes away some of it’s tartness that mostly leaves the sour flavor on the forefront. This means it can add a lot of depth to a chutney if the right spices are used. Ginger and sweet spices are the perfect ingredient for a gooseberry chutney and that combination works particularly well with ham and other cold meat dishes.