Olives come in many different colors, flavors, cultivars, sizes, and degrees of convenience. Some of the most famous olive types are black olives and kalamata, and people often wonder if they’re not the same thing, or how they differ.

So today we’re going to take a close look at kalamata and black olives, to see just how different they are. 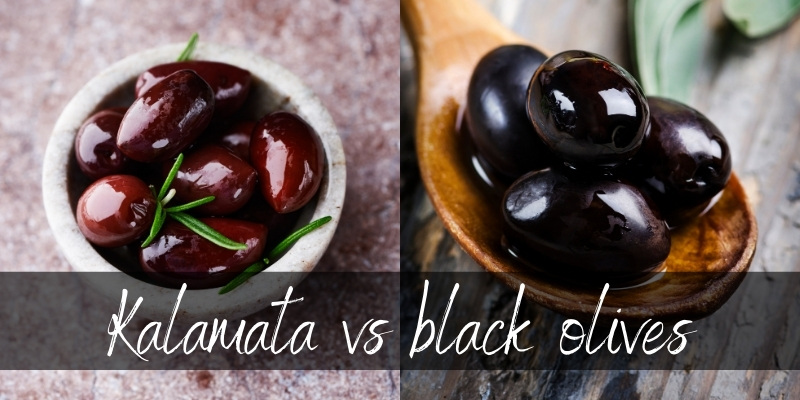 They differ in taste because black olives are milder due to a lye treatment, while kalamatas are treated like green olives, with brine and vinegar. The result is that both olive types are salty, with one being mild in flavor while the other is more pungent.

You have a much higher chance of finding pitted, and sliced black olives than you do kalamata, since they are larger and meatier. These differences are very important, and we’ll explore them in more detail in the following section. Then we’ll take a look at how olives are processed in general, and what each color actually means.

Kalamata olives are originally from the city of Kalamata, Greece. Here a very specific cultivar grew since ancient times, and they were renowned for their beautiful reddish-brown-purple color. This is the color of a 100% ripe kalamata olive, it does not change to completely black. In truth, not even olive cultivar turns to full black when ripe.

So kalamata olives are different, in that they have a much pointier pit, often pointing ‘up’,  in a way. This gives them an elongated, almond shape where the point extends a bit upwards. 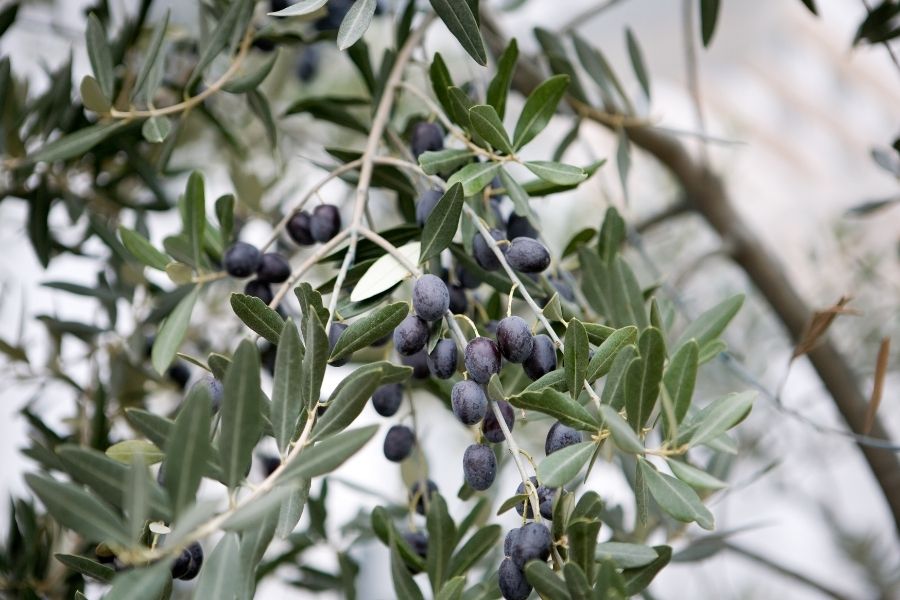 Read also: Should Olives Be Refrigerated ?

The meat on these olives ranges from a fair amount to not that much, but it’s always less than you would find on a black olive. This makes them much harder to pit, since a lot of the olive would be lost during processing.

An important note: kalamata olives often have a misleading label. This is because some producers class every purple olive (even if it’s not fully ripe) as kalamata, simply because of the color, despite the olives not being original, Kalamata-imported. SO make sure you read the label and import label carefully when buying these.

Black olives are a fully ripe olive, and they can be of different cultivars. Most olive cultivars ripen fully black, though some are a deep, dark brown. And each cultivar grows to different sizes, which is why you’ll find different sized black olives.

There are jumbo or mammoth black olives, very meaty and bred specifically to be easy to pit without losing too much product. There are also small (or regular) sized black olives that usually have more flavor than the large ones. And there are sizes that range between these two, with different degrees of pungency.

2. Black olives are milder, easier to start with

No matter how pungent a black olive is, it’s always much, much milder than kalamata olives. This is mostly to do with the way the olives are processed, but we’ll get to that in a bit.

In terms of flavor, black olives are perhaps the easiest to get used to. They’re mild, more or less salty, and have a vaguely earthy aftertaste. These always have quite a bit of meat on them, no matter the size. They’re also the ones you’re most likely to get when you ask for pitter or sliced olives.

They’re the standard ones on pizza, and if you don’t like them on a pizza, we understand. Black olives simply don’t shine on something hot, or even warm. They’re best with mayo, potato, pickles, and very cold. Mmmm.

Kalamata olives always have the pits inside, ad they are much more difficult to remove without losing a lot of meat. And they have a pungent, salty flavor that we think surpasses even green olives. A key difference is the lack of bitterness.

Where a green olive is a bit bitter, kalamatas are not bitter. They have a much stronger olive taste, and they may remind you a little of red wine. They’re not for everyone and they take some getting used to. If you mix these with crackers, Cheddar, and cream cheese you get a snack that just begs for a beer.

Another important difference between kalamata and black olives is the way they’re processed.

Black olives are treated with a lye solution, to leech out oleuropein. This is a bitter, very bitter compound that is present in all fresh, raw olives. You cannot eat a raw olive, it’s so bitter it can’t even be swallowed. So, it has to be processed either with lye or with fermentation.

Black olives are processed with lye and this softens the meat on them considerably, which is what gives them the same texture. After the lye has done its job leeching out the bitterness, the olives are rinsed and then packaged in a light brine.

Kalamata olives are processed like green olives, which is with brine directly, until most of the oleuropein is leeched and the olives are edible. Then they are rinsed, and packaged in new brine.

An important point about kalamata and green olives: they are fermented foods, meaning various bacteria contribute to this process, just like pickles. They don’t have as much probiotic power as pickles or sauerkraut, but it’s there.

Both kalamata and black olives make a great tapenade

If you’re looking for a good olive for a tapenade, you can use both kalamata and black olives without any issues. The bulk of the flavor comes from the anchovies and garlic in a tapenade. There is a bit of a difference, depending on which you use.

For example kalamata olives will bring almost no bitterness, a lot of salt, and a really pungent, delicious flavor. It pairs very well with the anchovies and brings a bold tapenade.

On the other hand black olives are a milder flavor, and they’re more of a background flavor, way less salty than kalamata. Both make a great addition, and you can even use both at the same time !

Can you substitute black olives for kalamata ?

You can use black olives instead of kalamata, just be sure to add a dash of vinegar and some extra salt to your meal. This way you get closer to the kalamata flavor.

If you’re looking to use kalamata instead of black olives, you first need to let them soak in cold water for a couple of hours. This is to draw out salt and part of the flavor. Kalamatas are much stronger than black olives, and they may be too much for some dishes, depending on your taste.

Olives – from tree to your table

Let’s talk a little bit about olives, and how they actually happen in the first place. They may look and sound like a simple affair, but really they’re not.

As an olive tree grows, it produces its fruits – the olive itself. Only it’s not edible, in no way should you ever try to eat a plain, fresh, raw olive. It’s much too bitter, due to oleuropein. So it needs to be leeched out of the olives, with two main methods. 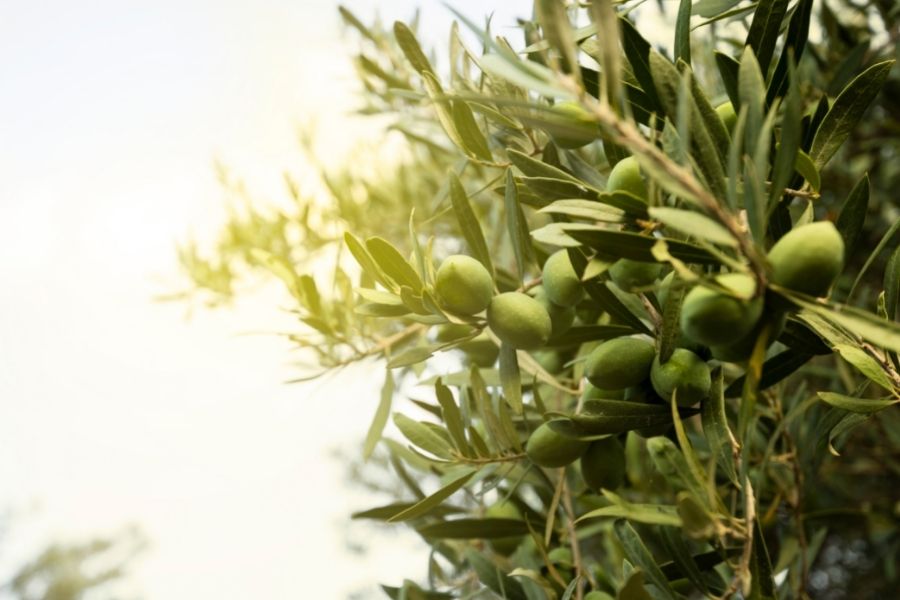 The first, most common, and most ancient, is the brine method. This implies salt, water, and olives sitting together for days or weeks on end. The water may be changed every now and then, or it may be left undisturbed. Different herbs may be added for flavor. This is usually done for green and kalamata olives.

The second method, which came about as an easier way, is to use a lye solution. This is much faster, and the lye draws out the bitter compound, making the olives edible. Of course, the lye solution is drained and the olives are rinsed off thoroughly. The lye method impacts the flavor and texture of olives, since it draws out a lot and softens the olives.

All olives are rinsed after processing, and then packed in a light brine so they can be shipped and sold.

A word on green, purple, and black olives

Since each color olive seems to have a different flavor, we want to clear this up. All olives start out green, even the black and purple ones. There are many different cultivars, and some of them ripen black, some purple, and some remain green when ripe.

The ancient olive used to be green, ripening to black. Nowadays there are so many cultivars you won’t really know which you’re buying, unless it’s stated on the label.

And that’s pretty much it about kalamata and black olives. They’re essentially the same thing, a fully ripe olive, but from different cultivars. The result is a difference in flavor and texture, and the possibility to mix these with some nice green olives and a charcuterie board.