Let’s face it: Maraschino cherries sound great, and when you were little you thought they were this expensive, high-quality fruit you only ate every few years. As an adult, you now know they’re mass produced and taste just like they look: neon-sweet, nothing like a cherry, and annoying.

So what do you do when your favorite Black Forest cake recipe calls for these neon nightmares as garnish ? Is there a true substitute for Maraschino cherries ? Why do they even exist ? Don’t worry, we’ll give you a list of suitable substitutes. Bonus, we’ll tell you how and why Maraschinos went from premium to the bright red, tasteless things they are today. 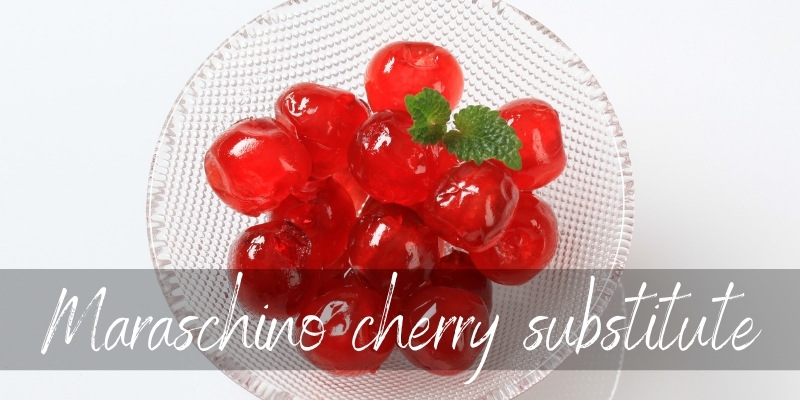 Most often a Maraschino is called for as decoration o garnish. It’s more for presentation than for taste, and in some cases it’s simply part of the recipe because the original ones really do taste great !

For example a Manhattan with real Maraschinos looks and tastes way better, and sundaes use them mostly for the bright pop of color. We can’t blame kinds for liking the bright red cherries, it’s be like blaming them for liking sugar. But, as adults we often want something that looks a bit more natural and tastes better.

So let’s take a closer look at those substitutes, and we’ll run you through how to use them as well.

The first and best substitute is actual fresh, sweet cherries. They’re not always in season, and when they are they might be a bit expensive. But, they’re totally worth it and you can easily use then in place of Maraschinos.

For example they’re great as pie fillings, in breads and cake batters, mixed into home-made ice cream, anything ! Not only do they have more flavor, they also have more moisture. So keep this in mind if you’re planning on using these in a cake mix or something similar.

If you can’t find fresh, you can also use frozen or canned. Just be sure to drain them very well, because those two are very wet cherries. Dried cherries work too, and you know what ? They may work even better. Soak dry cherries in sherry or cherry liquor, and then use them in place of Maraschinos !

If you need the closest ting to a Maraschino you can get, go for Luxardo Maraschino cherries. There are true to the original version, are not dyed red, and still have that true cherry flavor !

They’re pretty pricey and you won’t find them everywhere, so you may need to order online or pop into a specialty or Italian store and see if they have any. If you can find them, great ! They don’t come in big jars, so enjoy what you find.

Amarena cherries are another option if you can’t find anything else, even fi they’re a little different. Where Maraschinos use sweet cherries, Amarenas use sour cherries bred specifically for this. The recipe and history of Amarena cherries is also Italian, like the Maraschino.

The overall flavor is very similar, and you can easily substitute Amarena for Maraschino. Just keep in mind that Amarenas are generally larger than the bright red Maraschinos, so if you need a certain weight or volume, be sure to measure it !

Read Also: Does Tiramisu Have Alcohol ?

Make your own Maraschino cherries

Okay but what if you made your own Maraschino cherries ? Is that a thing, can that happen ? Definitely, and it’s not that difficult.

Fresh cherries, liquor, and sugar are the main ingredients. They need to sit for several weeks together, undisturbed. Thespruceeats has a recipe close to the original, that will get you alcohol-laden Maraschino cherries. You can also make alcohol-free versions.

In fact, the original Maraschino cherries were the cherries used in the making of Maraschino liquor. Reaching all the way back into the 16th century, Marasca cherries grew in the Dalmatian region, which is part of Croatia, bordering Italy.

The cherries were crushed and preserved in alcohol and sweetened, leading to the rise of Maraschino liquor. Various forms of this cherry liquor exist all over Europe, with different names, but the process is largely the same.

Maraschino became famous, and more and more folks started looking for them. The liquor was great, and the cherries preserved in the drink were often used to decorate desserts or added into drinks.

But as industrialization came, the population grew fast and the demand for this liquor and its cherries skyrocketed. Pair that with the prohibition period in America, and the modern Maraschino red cherries were born.

Alcohol-free, sweet, almond-flavored, and dyed red to be more attractive, it was a cheaper, easy to mass-produce Maraschino cherry. It thus became the Maraschino cherry America knew and used nearly all the time.

Obviously, it’s worlds away from the original, alcohol-soaked Maraschinos. You can still find them, though most companies produce an alcohol-free version so it could be used for any occasion, and for those with an alcohol allergy.