We’ve all had milk in one way or another, whether we’re lactose intolerant or in love with it. Something that happens often is the milk spilling over when we go to boil it.

The problem is twofold. Most folks don’t know what temperature milk boils, and what to do so it doesn’t spill over. We’ll touch on these topics today, and also talk about UHT/pasteurized milk since we’re at it. 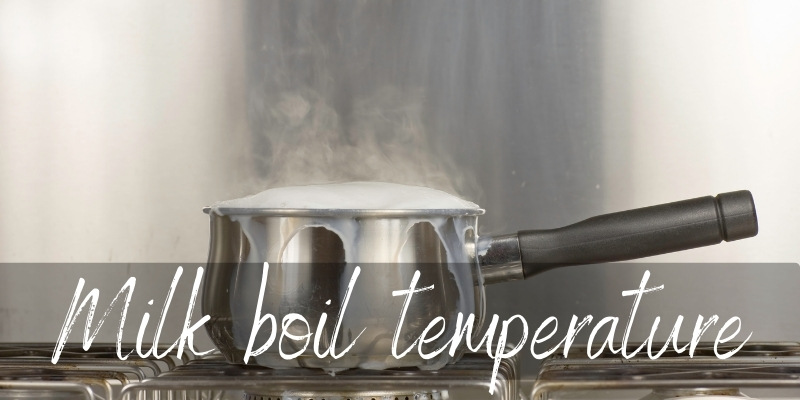 Table Of Content show
1 What temperature does milk boil ?
2 Is it ok to boil milk ?
2.1 What to do if milk curdles while boiling
3 Why does milk spill over when it boils ?
4 Pasteurized or UHT milk
4.1 Does boiling milk kill bacteria ?
4.2 Can you boil pasteurized/UHT milk ?
4.3 How long does milk last after boiling ?

What temperature does milk boil ?

Milk boils at a temperature of 100.5 C/212.9 F, and it may vary a fraction of a degree if you’re at higher altitudes, or have added salt or sugar.

What happens when milk boils ? The fats in milk rise to the surface, along with some protein. In a slow heating process this produces cream, but in a boiling setting it will just spill over.

The interaction between fats and protein forms a sort of foam, and it builds rapidly. Much, much faster than when steaming milk, so you have to watch the milk.

And just to clear things up, here’s what milk actually is:

This applies to any dairy milk, the only things that vary are the percentages of fat.

Read Also:How Is Powdered Milk Made ?

Yes, it’s okay to boil milk as long as you don’t continuously boil it. If you keep boiling it for several minutes on high heat, not only will it spill over, it will stick tot he bottom of the pan.

Boiled milk is actually a very old way of getting milk to last longer, and it’s still used today.

You may have heard of milk curdling sometimes when you boil it. That’s true, it can happen, but it can also be avoided. First we’ll explain why this happens, then we’ll guide you on what to do. 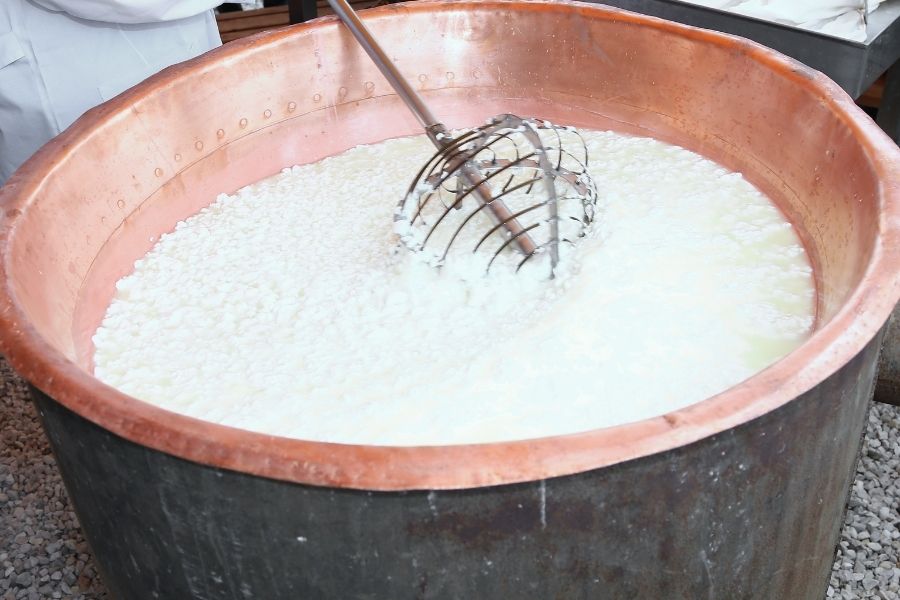 What to do if milk curdles while boiling

You may have a surprise and notice that your milk might curdle when boiling, if it’s an older bottle of raw milk. This doesn’t normally happen with very fresh milk, or previously boiled milk.

The reason is that milk contains bacteria that slowly eats the lactose in it, and releases lactic acid. This acid, like any acid including lemon juice or vinegar or fruit juice, makes the protein molecules bind together to form milk curds.

You will see this happening with old milk that has never been boiled or scalded before. Raw milk contains nearly all the bacteria that is normally present in yoghurt.

If you use fresh raw milk, the bacteria won’t have enough time to produce lactic acid and turn it sour so it curdles.

So in short, if your milk curdles when it boils it’s because of lactic acid. And when this happens there’s not much you can do, even if the taste or smell isn’t that bad.

Once the milk curdles you’re better off making fresh cheese, but you will have to reintroduce new bacteria.

The only way to avoid this is by using the freshest milk possible, or boiling previously boiled milk. If you’re buying from a supermarket then the milk is already boiled, or at least scalded.

Why does milk spill over when it boils ?

Milk contains protein and fat, and when you expose them to high heat they form a bond. The bond looks a lot like the inside of a sponge, with lots of connections. It becomes a foam, with small bubbles at first and the bubbles get bigger and bigger as the milk heats up.

The trouble is that between the moment you see the milk bubbling and it spilling over there’s only 30 seconds to turn off the heat.

All those bubbles build up very quickly and the foam will spill over, each and every time you boil milk. Both raw and pasteurized milk will do this.

The only milk that isn’t as fast to spill over is the very skinny 0.1% milk. The fats are almost completely removed and the protein has barely any bonds to make. It’s the same reason some plant milks are bad at steaming for lattes, since they don’t contain as much fat and protein.

We really need to explain UHT milk here, if we’re talking about boiling milk. UHT means Ultra High Temperature, meaning the milk has been heated to 135 C/275 F for 2-5 seconds.

This is also known as pasteurization, and is a very common process for food items that contain natural bacteria that needs to be removed. For example beer is pasteurized, nearly all baby food, some fruit juices.

This process is more common in the European Union, though America isn’t that much of a stranger to pasteurization.

Once the milk has been heated and cooled like this, it becomes much more  shelf stable. It’s packed into sterile, sealed cartons and can keep between 6 to 9 months, even at room temperature.

The reason it can keep so long is because all the bacteria has been killed off. It won’t settle into cream and whey, because it’s usually homogenized as well.

For those who don’t know, homogenized milk has all the fat particles made into smaller ones, and evenly dispersed throughout the milk.

So in short yes, boiling milk does kill bacteria, which in turns helps it keep for much longer. This will backfire if your milk is raw and a few days old, as the bacteria will have had time to multiply and produce acid

Can you boil pasteurized/UHT milk ?

Yes, you can boil pasteurized and UHT milk just the same as raw milk. It won’t take longer and it won’t take less time, it will be just like boiling any other cup of milk.

That being said, you do not have to boil this type of milk. It’s already been sterilized so it’s safe to drink as-is. And if your question is more about whether you can boil it for sweets and creams, yes you can do it without any problems.

Read Also:Why Do You Soak Liver In Milk Before Cooking ?

How long does milk last after boiling ?

Fresh raw milk that has been boiled will last for 2-3 days, in the fridge. The reason is that it can’t be kept in a sterile environment (unlike a UHT carton) and it need an airtight seal.

Meaning that in the fridge, it will most likely still be in its original pot, with cling film on the top. If you decide to transfer it to a large plastic bottle it will not be 100% sterile, even if you scald it in hot water.

The air around us has its own bacteria and spores, and they will get into the milk.

This is the same reason a freshly opened carton of pasteurized milk won’t last more than 3-4 days in the fridge. It will get contaminated (albeit slower) by the air around us.

So don’t fret, boil your milk and drink it within 2-3 days. It will be safe to drink and the nutritional value will be roughly the same. The best part is that pasteurized milk triggers a much milder response in those with lactose intolerance.