Got confused between all the milk options out there ? Don’t be, we’re going to explain just what pasteurized milk is, and how it’s different form raw and homogenized milk.

Most of the time the differences lay in some technical terms, but with pasteurized milk it’s actually a bit of a lifesaver ! Don’t know what we mean ? Read on to find out why milk is pasteurized, and what that process means !

Why is milk pasteurized ?

Milk is pasteurized to kill off any harmful bacteria that may be present in raw milk. For this reason, pasteurized milk is safer than raw, and has a much longer shelf life since it has a harder time going bad.

You’ll notice your milk is pasteurized if it has the following labels:

In some cases the label may not be immediately obvious, but the word ‘pasteurized’ should be printed clearly on the carton. And most of the time pasteurized milk comes in those TetraPak cartons, with aluminum and plastic lining on the inside to keep them sterile.

Why pasteurize though ? Because raw milk can be a health risk, especially for those with low immunity, or a mild lactose intolerance.

You see, lactose is reduces when milk is pasteurized, meaning it’s still there but in smaller amounts and those with only a mild reaction will have an easier time. Those with a severe intolerance should still steer clear of dairy completely.

Another important fact is that milk sold raw is illegal in some places or states, because it’s only good for a couple of days before it expires. Thus it’s much easier to pasteurize the entire milk production and keep the milk safe and pathogen free.

All that being said, if you get your hands on raw milk your can pasteurize it yourself. In fact, it might be better to do this anyway, instead of drinking raw milk.

Read also: Why Does Milk Curdle ?

Pasteurization is the process of heating milk near the boiling point (just under 100 C/212 F) for a few seconds, to kill off any bacteria present in the milk.

This is done to keep milk safe and shelf-stable, and to provide a product that is standardized. Meaning every time you pick up your UHT milk it will always be the same, since all milk is treated the same and come out the same. 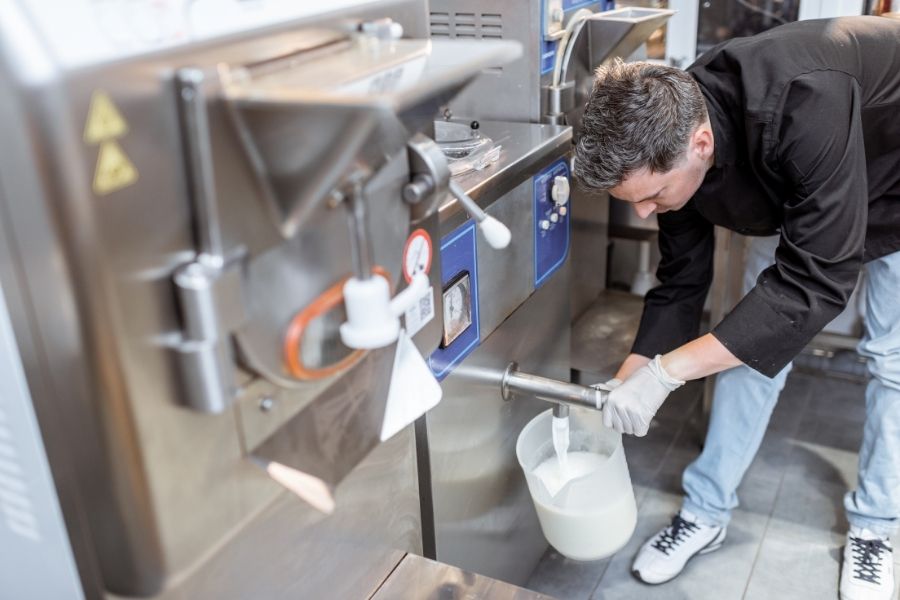 Four types of pasteurization exist out there, and they are:

Whichever method is used for the milk you’re buying, you can be sure of one thing. Any bacteria or pathogen is more than likely gone. But, once you open the milk any bacteria or spores present in the air around you can and will get into the milk.

You may be a little confused, since there is another process milk goes through and people often confuse the two. Homogenization is the process of making all the milk particles the same size, specifically the butterfat particles.

It simply means all the particles are of the same size, evenly dispersed throughout the milk. If milk wasn’t treated this way, the fat and cream would rise to the surface and separate from the whey. This gives milk a much shorter shelf life.

Can you drink pasteurized milk directly ?

Can you boil pasteurized milk ?

Even if it’s been heated before, there’s nothing stopping you form bringing the temperature up again. If you feel you have to boil the milk, then go ahead. Or if your recipe calls for hot, boiling milk (like pudding) then go ahead and boil it, there’s no problem.

But if you’re concerned over health, cleanliness, and bacteria then don’t be. As long as it’s pasteurized it’s safe. If you want to be extra-sure, do your best to look for UHT milk. It’s the safest, most sterile milk on the market and it keeps for up to 6 months unopened.

Read Also: Why Do You Soak Liver In Milk Before Cooking ?

Does raw milk have probiotics ?

No, the milk itself does no have probiotics but it has the precursors for probiotics. What do we mean ? The few bacteria milk has are not enough to actually have an impact on your gut. At least not a significant one.

The true probiotic effect comes through when the raw milk is left to grow its bacterial culture and turn into yogurt. Even so, it usually need help with a starter culture. If you don’t know what that is, it’s a group of bacteria that’s already been grown and introduced to the milk, to speed up the process and get the yogurt going much faster.

So the only real probiotics are found in fermented milk, like yogurt and kefir. It’s why yogurt may make a bowel movement easier, but without upsetting your stomach and causing too much bloating.