Rutabagas and Jicama are both root vegetables, and that’s why they are often confused with each other. Coming from similar botanical backgrounds, they both are quite a reminiscent of cabbage. Actually, one is similar to potatoes while the other one is quite like radishes.

Just like every other vegetable out there, they both serve different purposes and are marked by a few similarities as well as differences. Scroll down to get a deeper insight into Rutabaga Vs Jicama. 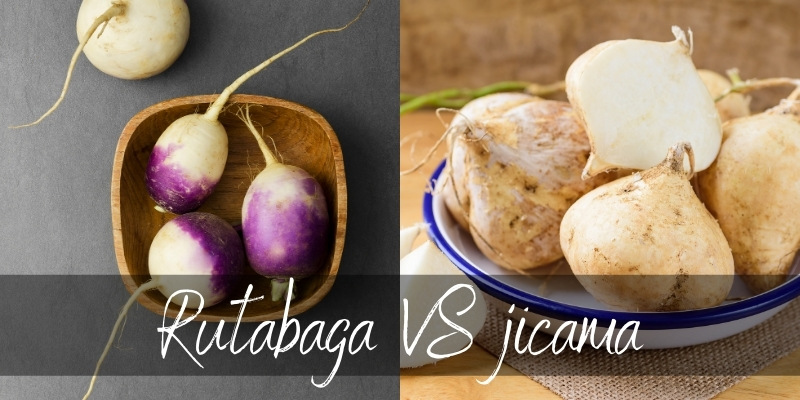 Jicama is a mild flavored root vegetable originating in Mexico and Central America – and is a part of the bean family. It comes with a bitter yet sweet flavor.

Rutabagas, on the other hand, taste milder than jicamas, almost like a carrot without sweetness. Also known as a Swed, fall turnip or Swedish turnip, rutabaga is a direct cross between cabbage and turnips. It’s quite a juicy veggie with a crisp touch.

Both the veggies have a bitter flavor that’s similar to cabbage, but come with their own differences, growing conditions, textures, appearance, uses and flavors.

Called ‘Mexican Potato’ because of the versatility and a mild flavor, jicamas are slightly sweet and crunchy. The starchy flesh comes with a nutty flavor, while the crunchy texture of jicama comes with slight moistness, much like a savory pear or a crisp apple. 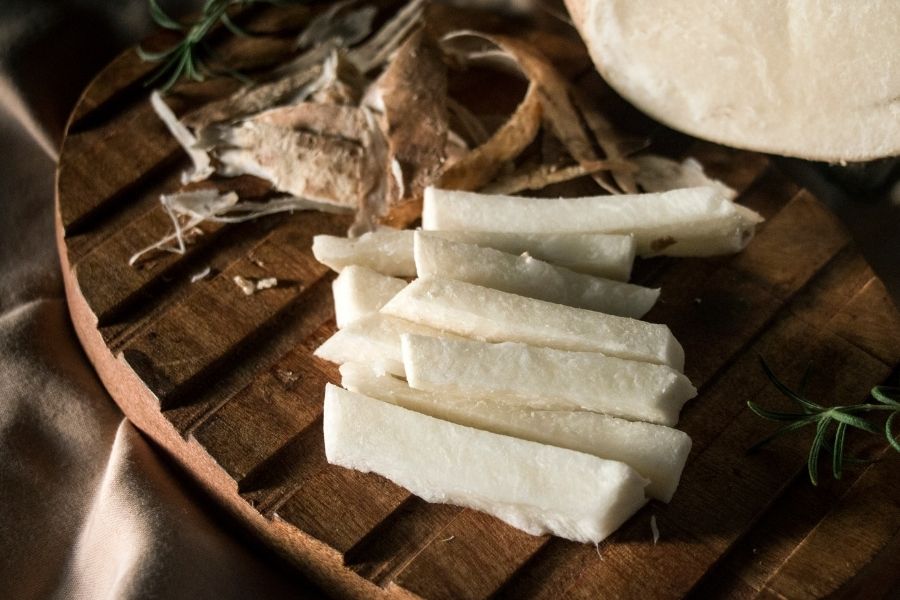 The vegetable’s peel is edible, but most people usually discard it because of the tough, fibrous texture. While the root is the only edible part of this plant, the seeds, leaves and stems contain a toxic element rotenone.

Rutabagas come with an earthy, mildly peppery flavor that’s a tiny bit sweet and a tiny bit bitter. To explain it better, combine the slight zest of a radish, the earthy touch of turnips and the mildness of a cabbage together – and you are going to get the taste of a rutabaga.

Rutabagas remain crisp and crunchy, even after cooking, while also mild and sweeter when eaten raw. When cooked, they taste sweet, quite like a rich potato. Although, it’s a root veggie, you can also consume its leaves just like most leafy greens.

The round shape of jicama looks quite similar to that of rutabaga, but it comes with a tough skin like a brown paper bag or ginger root skin. When you peel back jicama, it features a white interior that’s crunchy and crispy like water chestnut, potato, or apple.

While rutabagas can be sometimes round, they are mostly orb-shaped, also a bit more elongated at times. Generally, rutabaga is purple on the outside.

The purple color usually covers nearly half of the vegetable, quite like a turnip with a purple top. The remaining skin of the veggie is a yellow-ish white.

Jicama can only be farmed in warm climates. It has Mexico as its origin, but today it’s grown in several other parts of the globe. Generally planted from seeds, jicama grows best in places getting a medium amount of rain while being sensitive to frost. If its planted from seed, jicama roots call for five to nine months before they are harvested.

On the other hand, rutabaga roots ripen best in cool climatic conditions, while calling to be planted at the right time so they can mature while the weather stays cool. Rutabagas are best for a fall crop in cool places or as a winter crop in warm spots. The plant needs 80 to 100 days right from when its planted to the harvesting. 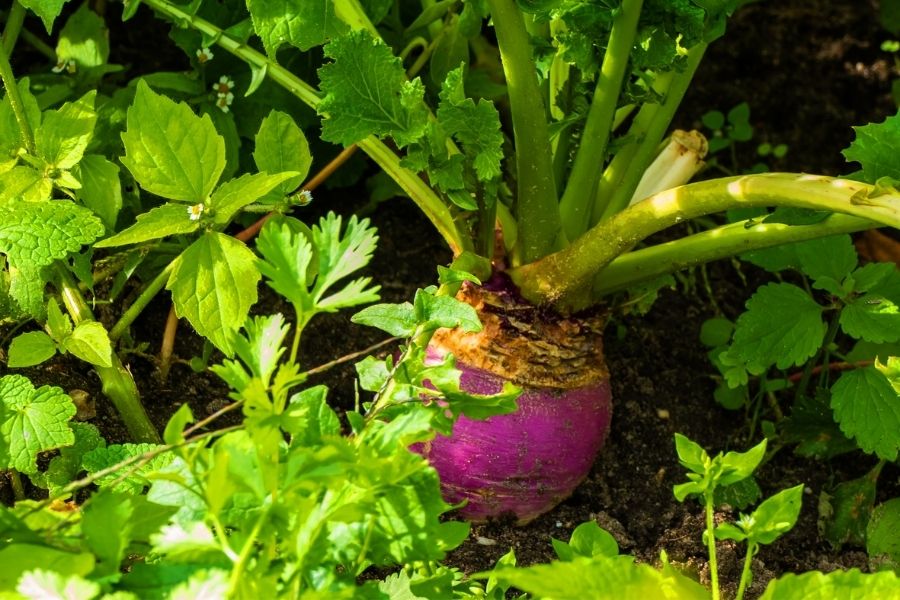 Speaking of storage, both rutabaga and jicama are quite similar and need to remain dry. You must store them both unwrapped at cool room temperatures or in the refrigerator.

If they are free from moisture, they will last for up to a week at room temperature, while lasting about 2-3 weeks in the fridge. Once cut, make sure you cover rutabagas as well as jicamas tightly using a plastic wrap.

What makes them different is that rutabagas can be stored like onions or potatoes in a cool dark place for up to a week. Jicamas are likely to lose their firmness if kept that way, so it’s recommended to put them in the fridge.

How to prepare jicama and rutabaga

The mild flavor and the relishing crunch of jicamas and rutabagas make them very versatile and apt for a wide spectrum of culinary preparations, raw or cooked.

Mostly, people love to use jicama as a raw garnish, or main chief salad ingredient. Some also enjoy it raw as a snack just like carrots or radishes cubed, julienne or sliced. What makes it so popular as a salad element and veggie roast is that it does not oxidize or turn brown once you cut it, unlike apples and potatoes.

It works wonders in stir-fries too, and retains its crunchy texture if you wait until the last few minutes of cooking to add the jicama pieces in. You can even bake it, mash it, or fry it as a substitute for potatoes. Or simply turn it into matchstick shapes with a squeeze of lime juice and s little chili powder for a lovely spicy snack.

The super crunchy veggie also doubles up as a good slaw or sushi ingredient. Although it can be eaten raw, make sure you always peel it first. 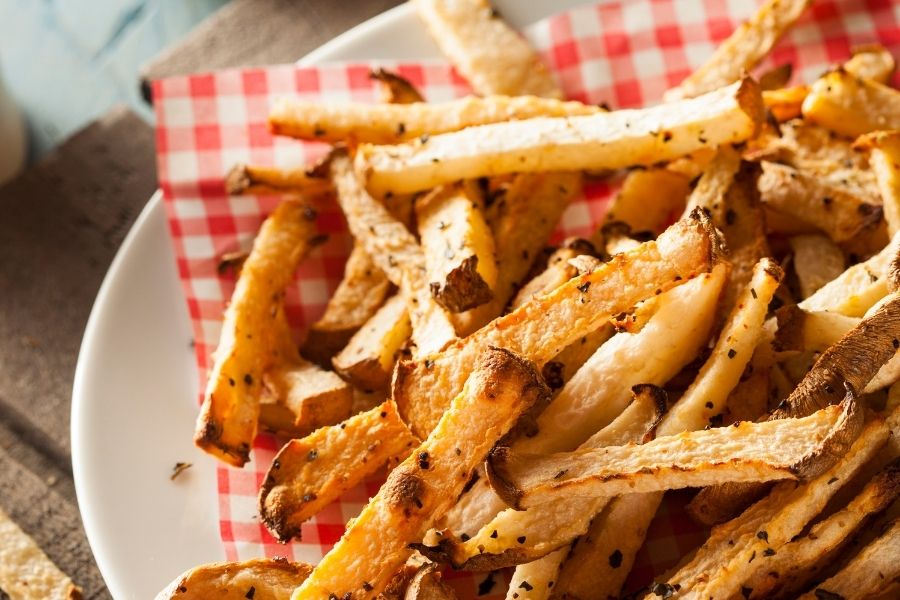 Rutabagas and jicamas are similar when it comes to eating them raw. You’ll need to peel the waxy skin off first, further grating some rutabaga right onto your salad. However, eating raw is not the most popular way to use rutabagas, unlike jicama.

The most preferred way to cherish it is to boil the cruciferous vegetable and mash it to work up as a low-carb alternative to potatoes. You can also slice rutabaga into fries and toss the slices in the air-fryer, or simply dice them and serve with your choice of sauces.

Rutabagas are equally great when roasted to join a roasted veggie platter containing carrots, beets, onions, parsnips and celery roots. You can also stew rutabaga to further add it to hearty soups, like chicken soup, beef barley, and more.

Tender rutabagas taste amazing when sliced paper-thin and savored by themselves, or tossed into salads. Apart from substituting them for potatoes, they can also be spiralized for a veggie-noodle moment.

You should give both of them a try, if you can find them. Maybe you’ll have a new potato substitute, or a favorite new roast veggie !