Tomatoes are delicious and juicy, but often we get some really bland, cardboard-like red veggies instead of the real, flavorful thing. Sometimes though, you get lucky and find the really good ones, so you go back and get some more. But how do you store a whole bunch of tomatoes ?

Should tomatoes be refrigerated  ? Should you keep them on the counter ? Won’t they go bad ? Let’s take a look. 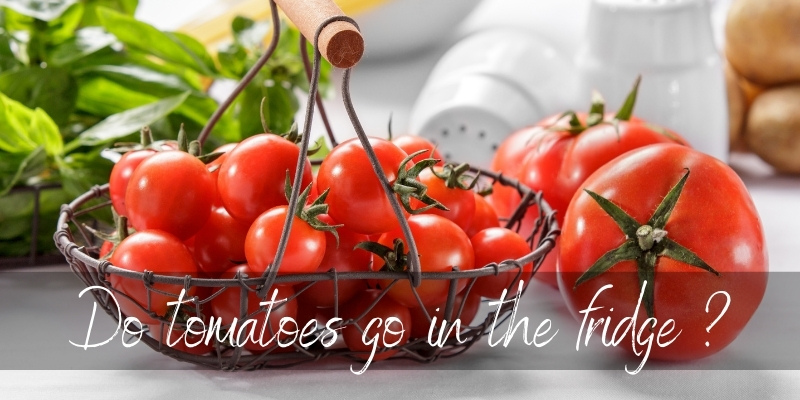 Table Of Content show
1 Should tomatoes be refrigerated ?
1.1 Fully ripe vs unripe tomatoes
2 Can you leave tomatoes out overnight ?
3 Can you store tomatoes in a cold pantry ?
4 What’s the best tomato type ?
4.1 Beef tomato
4.2 Plum tomato
4.3 Cherry tomato
4.4 Globe tomatoes (most common)

Should tomatoes be refrigerated ?

Fully ripe tomatoes are the ones that have been allowed to ripen on the vine until they get to the right texture and firmness. Most tomato varieties have been bred to look completely red even when they’re not fully ripe. You’ve definitely bought red tomatoes that were a little too firm and discovered they still had some green inside, around the seeds and the core.

So fully ripe tomatoes are at best just a bit white at the core, and then red and orange inside. Beautiful, juicy tomatoes. But they are difficult to transport and they spoil very easily, as they’re so ripe. For example farmer’s market tomatoes, or home grown tomatoes are always fully ripe. They’re sold close to the farm, or you have them right in your garden, so transport isn’t a big issue.

Supermarkets usually carry unripe tomatoes, or barely ripe ones that don’t have that great flavor. You can get around this by allowing the tomatoes to ripen a little on the counter. This will only work with unripe tomatoes. And after they ripen, you still need to move them into the fridge.

Can you leave tomatoes out overnight ?

Yes, you can leave tomatoes out overnight, especially if they’re unripe tomatoes. If your room or kitchen is not particularly hot, 12-14 hours on the counter should be safe. Do not let ripe tomatoes sit on the counter any longer than that, because they will spoil much faster.

For tomatoes stored in the fridge, always take them out at least half an hour before serving. Very cold tomatoes are not the best in terms of flavor or texture, they’re much better at room temperature.

Can you store tomatoes in a cold pantry ?

Yes, a cold pantry is a good place to store tomatoes. Fully ripe tomatoes will still spoil in 2-3 days, but unripe tomatoes can last up to a week. When storing tomatoes in a cold pantry, make sure they have plenty of air, and have no direct sunlight.

The Brandywine tomato is the best kind of tomato, since it’s large, very flavorful, does not have too much juice compared to its flesh, and grows fairly easily. They’re more expensive since they have a low yield per plant, so farmers will want to cover their losses.

Read also: Should Cauliflower Be Refrigerated ?

You won’t find Brandywines in every market stall or supermarket, they’re more of a specialty item. So let’s take a look at the common tomatoes in supermarkets and see which how they compare.

Keep in mind that each of these has been developed for different reasons, so where one shines the others may not, but this doesn’t necessarily make it an overall winner. It really depends on what you want your tomatoes for.

Beef tomatoes are the largest tomatoes around, and they’re very similar to Brandywine. They’re called beef or beefsteak because they’re so large you can easily use them on a beefsteak sandwich in one big slice.

These don’t have too much juice, and have more meat then other tomato types. Often you’ll notice they’re ribbed, some more than others, and they may look pink rather than red. Their appearance is just fine, don’t worry, they’re ripe and good for eating. In terms of flavor these are the best.

Plum tomatoes also have a lot of flesh, but their seeds and the jelly around them are also good. These are great for sauces and roasting, but they have a lower chance of also tasting amazing. They taste good, but maybe not as good as a beefsteak tomato. They’re called plum tomatoes due to their elongated shape, being rather oval than round, sometimes with distinct sides.

Cherry tomatoes are the smallest tomatoes, and are often confused with Roma tomatoes (tiny plum tomatoes). Both cherry and Roma are similar in terms of flavor and size, but they have the most juice, compared to other tomato types.

These are very common in supermarkets, and come pre-packaged in perforated plastic clamshells. These have the highest chance of being unripe when you buy them, but they’re great in salads.

Globe tomatoes are the most common, perfectly smooth and round tomatoes out there. They look like regular sized cherry tomatoes, and they’re a good all-rounder, but have the least chance of tasting good. This is mostly because they’re almost always picked unripe, for transportation reasons.

So make sure to let these ripen on the counter, stem-side down, for a couple of days. Then transfer them to the fridge.

In short, unripe tomatoes of any kind really need to sit at room temperature so they can ripen a little more. Then, store any tomatoes in the fridge. If your tomatoes are already ripe when you buy them, stick them right in the fridge to make them last longer.