Specifically today, why are tomatoes to many different colors ? Especially when we’re taught tomatoes are red. You wonder just why there’s a box of red, orange, and yellow tomatoes. Or what’s with the red and purple ones ? When did these juicy guys get so colorful ? Let’s find out. 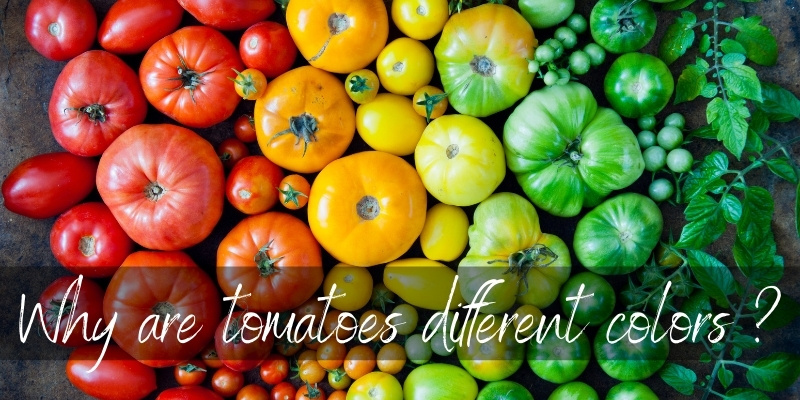 Table Of Content show
1 Why are tomatoes different colors ?
1.1 Not all tomatoes are red when ripe
1.2 Not all red tomatoes are ripe
1.3 What about green tomatoes ?
2 How to tell when tomato is ripe and good
3 Can you eat rainbow tomatoes ?
4 Can you ripen tomatoes off the vine ?

Why are tomatoes different colors ?

The reason tomatoes change colors are different colors when ripe is due to the way chlorophyll breaks down and lycopene develops.

Chlorophyll is the green pigment present in all plants, and it’s crucial for a plant’s development. It absorbs sunlight and helps photosynthesis. As the tomatoes on the vine ripen, the fruits no longer need chlorophyll and instead start developing lycopene, a type of carotenoid.

Lycopene is a red pigment, with a yellow base. So the tomato will go from green to yellow to orange, and finally red when fully ripe. You’ll find most lycopene in tomato skins, and even in red pepper skins.

But the original tomato is no longer the only thing sold. Through selective breeding, tomatoes have several cultivars now, and they can be any shade lycopene is capable of producing. Let’s take a closer look.

Not all tomatoes are red when ripe

Each tomato variety is meant to look and feel a certain way. Both to separate it from the others, and to appeal to the crowd’s tastes. So you will easily find tomato varieties that are dark pink, yellow, orange, and even an interesting type called ‘chocolate’. Those are a mix of red and greenish-brown that makes them look almost like chocolate.

Read also: Why Is My Tomato Sauce Orange ?

These cultivars were achieved through selective breeding, until a strain that was a consistent color was produced. To anyone just starting to get into tomatoes, this can be very confusing because you can’t just go by color anymore.

On the other hand, you also have variety, in texture and flavor. Because despite being fully ripe when they’re, say a golden yellow, they will not be as sweet as plain red tomatoes.

Not all red tomatoes are ripe

Another point about selective breeding is how uniformly red tomatoes are. In truth, just like apples, real tomatoes may have more pigmented spots were direct sunlight developed the lycopene.

This means two things. First, most tomatoes are grown in hothouses or greenhouses, where the light is evenly dispersed. This means less spotting when the color develops.

And second, people know a red tomato is a ripe tomato, and will often go by color instead of touch. So most varieties of tomato are bred to develop a fully red outer color, despite not being ripe. This means the lycopene will develop much faster, and it will ripen afterwards.

This is often the case when you buy those juicy-looking red tomatoes that taste like nothing and sound a bit like an apple when you slice them. Very firm, and often a bit green on the inside when you look at them.

A good point about these tomatoes is how well they hold up during transport. A true, fresh and ripe tomato will squish from the farm to the market.

What about green tomatoes ?

There are such thing as green tomatoes, though they’re a bit of a stretch. The problem with these is that the lycopene will be barely developed, the texture will be firm even when fully ripe, and they won’t be sweet.

We don’t recommend trying green tomatoes, though that could be our personal bias. Where we’re from, green tomatoes are only good for pickling. 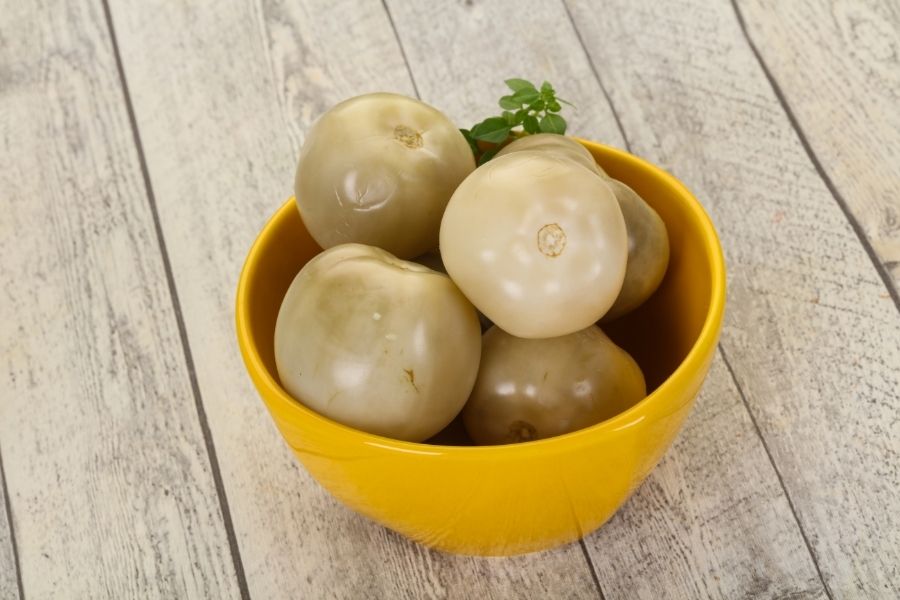 How to tell when tomato is ripe and good

Since you can’t use just color to tell when the tomato is ripe, you now have to rely on another sense: touch. You can still use color, in a way. As long as you know the tomato cultivar and know what the final color should look like, you can go by that as well. Even so, you risk some bad tomatoes.

So, you should try and touch them. Tomatoes are meaty and juicy on the inside. This means that a ripe, probably sweet tomato will be a little squishy when you touch it. Softer than a ripe avocado, actually it should be lose to an overripe avocado.

This means they’re good to eat right now, but they will hold up in the fridge for another 3-4 days before growing some fuzz.

If the outer skin is even a little pierced, don’t buy it. Select another tomato, and make sure it’s completely dry. Always place your tomatoes towards the top of the grocery bag. If you squish them you have a lot of cleaning up to do.

Can you eat rainbow tomatoes ?

Yes, you can eat rainbow tomatoes but don’t expect them to be any other color than green, yellow, orange, red, and possibly purple. It’s not the rainbow colors you normally expect.

And each plant will only produce one color. You cannot get a single tomato plane to produce green, red, and purple tomatoes, and have them different colors when ripe. It’s just now how plants work.

Rainbow tomatoes are simply a mix of tomatoes from different plants, sold in a package that claims the seeds will get you different colored tomatoes. That’s partly true, since the tomato plant seeds you’re buying will have a certain color, but you won’t know until you plant them.

Your best bet at simulating a rainbow effect is to buy several tomato varieties, and arrange them in a salad so you have different colors. If you’re planning of raising the plant yourself, buy seeds from varieties that you know will turn out a specific color.

So buy and plant a green, a yellow, and orange, a red, and maybe a purple. Possibly in that order, so it looks neat. Please do not be disappointed when the purple is not true purple. At beast it’s a nearly-black purple that will show most where the sun hits the most. The rest of the tomato will be red.

Yes, ads for rainbow tomatoes are just ripoffs and you’re better off not getting them. Instead buy real tomatoes with color you know are possible.

Read Also: Should Tomatoes Be Refrigerated ?

Can you ripen tomatoes off the vine ?

No, tomatoes will not ripen off the vine since they need the nutrients the vine offers, as well as the sun to convert said nutrients. Tomatoes will get softer as they sit out, but that’s only because they’re starting to rot.

Your tomato is only as good as when you pick it. So of you’re unhappy with the tomatoes your local market has, check back later to see if they’ve picked a batch that is ripened.

Again, remember that not all red tomatoes are actually ripe. You run the risk of bringing home cardboard-tasting tomatoes even if they say ‘ripened on the vine in a hothouse’. The only ripening done there is allowing the color to come through and letting the tomatoes get just a little soft. And that’s only so they survive transport.

Getting tomatoes any other time than summer and late summer is an often disappointing adventure.