Stuck in the produce aisle and can’t decide between plum or Roma tomatoes ? Don’t worry, we’ve got you covered. Nearly all vegetables and fruits have subtypes, and none of them have names that would tell you anything relevant.

So to make things easier for everyone, today we’re looking at the difference between plum tomatoes and Roma, two of the most common names you’ll find in the market.

The answer might surprise you, so read on to find out ! 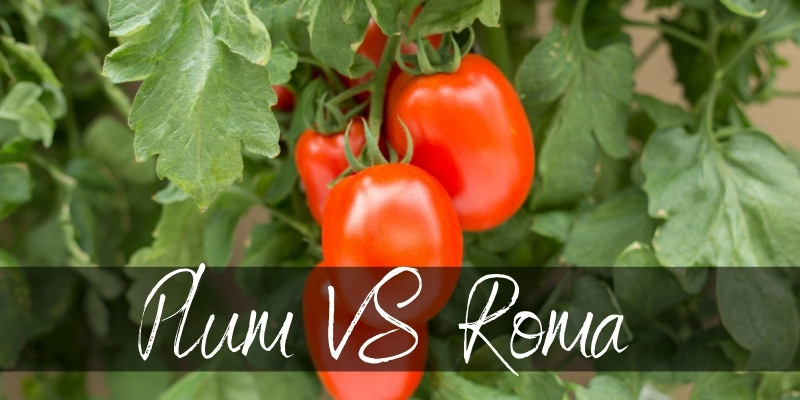 The only difference between plum and roma tomatoes is that roma are a variety of plum tomatoes. Yes, plum tomatoes come in different varieties and roma is one of them.

Roma tomatoes are the large, oval tomatoes that have less seeds than other types, and are generally more flavorful. To compare them with plum tomatoes would be pointless, because they are a type of plum tomatoes.

However we will be covering the other types of plum tomatoes in this article, so you can get a better understanding on the main varieties. But first, we’ll start with what plum tomatoes are all about.

If you’ve ever bought tomato sauce or tomato paste from the grocery store, it was probably made with some kind of plum tomato! Most varieties of this red, oval shaped fruit are medium sized when compared with larger tomatoes, such as the beefsteak. However, one kind of plum tomato is quite small, similar to the cherry variety!

How do plum tomatoes feel?

As all tomatoes, the outside of the plum variety tends to be quite soft. So make sure you don’t press too hard into it when deciding on one to purchase.

On the inside, though, plum tomatoes are usually quite solid and tender, more often than not, containing less of those tiny little seeds that get stuck in your teeth. Their lack of many seeds means they usually don’t have much liquid in them either, as the viscous part inside tomatoes is what protects the seeds.

How are plum tomatoes used?

Plum tomatoes’ lack of much water and seeds is what makes them perfect for use in processed sauces and pastes. No one wants overly watery pasta sauce!

Their flavor is often described as quite tangy, as tomatoes contain acid. That’s why, if you’ve ever gotten tomato juice on a cut, it probably burned like crazy for a second! However, plum tomatoes are also a bit sweet, making them an excellent choice for a quick snack, as well!

Despite their savory and sweet flavors, plum tomatoes are not overwhelmingly strong, which makes them perfect for sauces and pastes! Adding herbs like oregano and basil will not get lost within the plum tomato’s flavor; it will simply enhance it!

Are there different varieties of plum tomatoes?

In fact, there are many kinds of plum tomatoes, three to be exact, all of which are the tomatoes of choice for home cooks and chefs everywhere! Their pop of flavor and color, along with their sturdy, solid texture make plum tomatoes the most highly sought after when it comes to cooking!

But, which variety of plum tomato is the most popular? Well, we’re glad you asked! The answer is roma tomatoes !

Roma tomatoes are actually a variety of plum tomato

Yes, really! If this surprised you, don’t feel bad; many aren’t aware that romas are a type of plum tomato! In fact, plum and roma are often used interchangeably at grocery stores and produce markets!

This is due to the fact that roma tomatoes are, in fact, the most popular plum variety. But why is that? 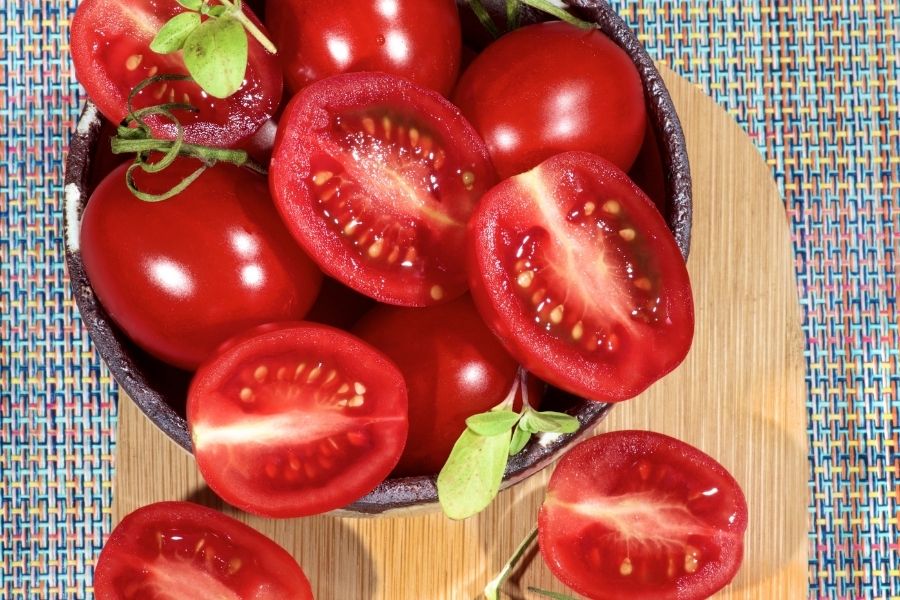 Roma tomatoes, most notably the Roma VF variety, are plump, red, almost egg-shaped tomatoes! If you’ve ever seen a cluster of medium sized, mildly red oblong tomatoes at the supermarket, chances are they were romas!

That’s because roma tomatoes are one of the easiest varieties of tomatoes to cook with. Their lack of many seeds, along with their firm texture allow them to create beautiful, tasty sauces and pastes.

In addition, the Roma VF tomato variety is resistant to two very common soil-borne plant diseases, Verticillium wilt (a cold weather disease) and Fusarium wilt (a warm weather disease). So, if you see Romas with the VF tacked onto their names, you can rest assured that those babies are safe from any harmful diseases or infestations!

Another interesting fact about Roma tomatoes is that they are open pollinated. That means that this variety, unlike most grown commercially today, is actually pollinated naturally! Birds, bees, and other insects land on the beautiful little flowers and allow pollination to happen as it should! Sometimes, open pollination can also be done by humans, but only if it’s done by hand.

Though open pollination doesn’t make the roma’s flavor any different, it does allow it to form new viable seeds within, which is perfect for those interested in propagating them at home! They are also determinate, meaning they produce a whole bunch of fruits at once and then die, without forming new leaves and fruits; this bulk yield makes them another great choice for sauce!

Other varieties of plum tomatoes

In addition to romas, plum tomatoes can also be found in two other popular varieties: grape and San Marzano!

These little guys are actually quite similar to another small tomato variety: cherry tomatoes. Both are tart, yet sweet enough to munch on as an excellent, filling snack! However, like all plum tomatoes, the grape variety is more oblong than cherry tomatoes. 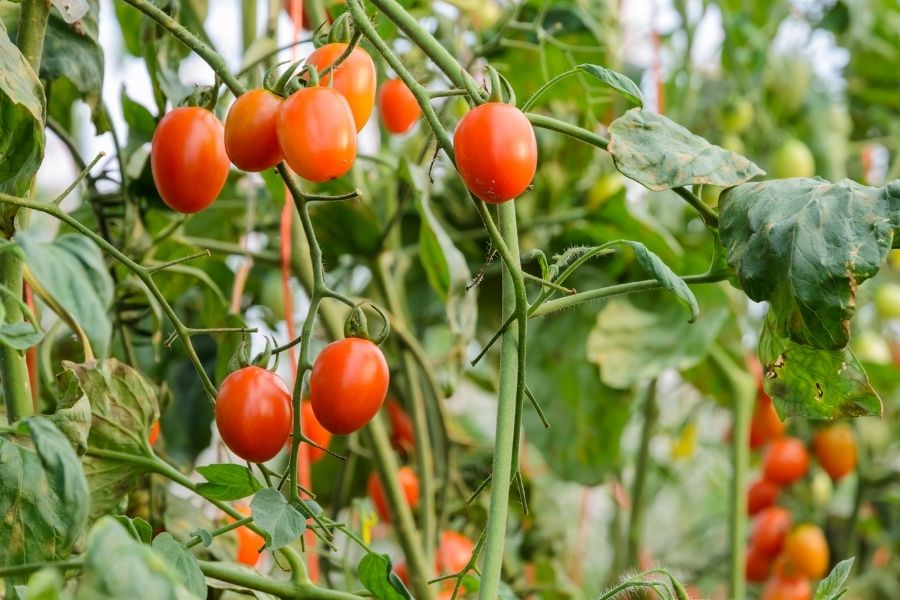 Interestingly enough, grape tomatoes are believed to have been made first in southeast Asia! Though all tomatoes did originate in Mexico, the variety we have today is, in part, thanks to agricultural breeding practices performed by humans.

Oftentimes, you will see grape tomatoes roasted on the stove top or in the oven and used to compliment sauces or veggies in a stir fry! Their high sugar content helps make grape tomatoes one of the most popular tomato varieties for snacking, as well!

Ah, yes, the San Marzano! Perhaps the most expensive variety of plum tomatoes, San Marzanos are technically only produced in San Marzano, Italy, though you can now find seeds on the market anywhere in the world.

These sweet, less acidic plum tomatoes are quite recognizable for their long shape, with a point at the bottom sometimes. They are so popular in fact, that they’re one of the only two tomato varieties to be legally designated for use on authentic Neapolitan pizza!

San Marzanos, like the roma variety, are also open pollinated; however, unlike their sisters, San Marzanos are actually heirloom tomatoes!

Now, the term “heirloom” has gotten a bit confusing over the years due to marketing practices, but all heirloom actually means is that it has not been cross bred with other varieties for over 40 years!

However, this means that heirlooms are also more susceptible to diseases; plus, they go rotten more quickly than hybrids.

San Marzanos are also different from the Roma sisters because they grow indeterminately. This means that they produce less fruit at once for a longer period of time; so, you’ll have the plant for more than one season, but you won’t have a giant yield all at once. That’s why they are more popular with home gardeners; it keeps the fun going for longer!