Mushrooms may be a bit confusing if you’ve never dealt with them before. They’re not like other vegetables, and they’re a great substitute for meat. They also cook in their own, specific way. We’ve all seen a pot full of chopped mushrooms shrink before our eyes, as they cook.

So we come to how to handle mushrooms in general, starting with whether you should peel mushrooms or not. Is it okay to eat the skin ? Should you wash mushrooms ? Remove the stems ? The gills ? Why are they darker ? Someone help !

This is what we’ll be discussing in this post, since mushrooms really are useful and delicious. If you cook and season then right, they can go with almost anything. So let’s start with the basics of mushroom cooking. 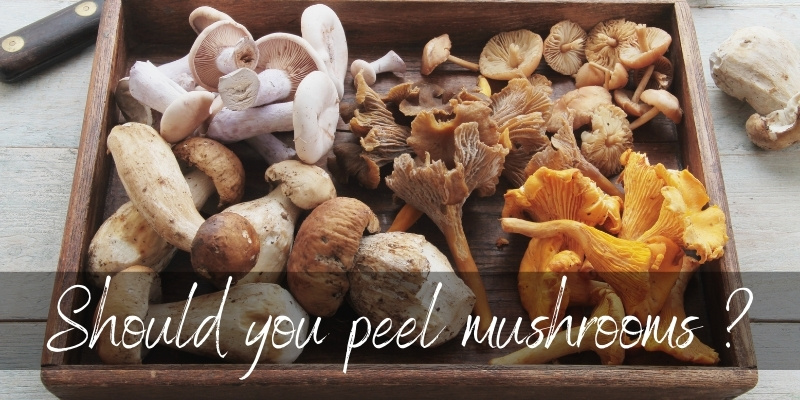 Should you peel mushrooms ?

No, mushrooms do not need to be peeled like other vegetables. Mushrooms are grown in very clean, sterile environments, in a special type of moist dirt. That dirt is easily rinsed off the mushrooms under running water. Peeling the mushrooms is simply time-consuming and will not make the dish any better.

Instead separate the stems from the tops, run them under cold or lukewarm water, then only cut off the very bottom of the stems (roots).

Is it ok to eat mushroom skin ?

Yes, mushrooms skin is perfectly fine to eat, even the veil is fine to eat. Unlike other vegetables, mushrooms are edible all the way through. There is no protective, hard outer skin, nor is there a middle part where the seeds are hidden.

So don’t worry if your mushrooms still have the skins on, they’re perfectly good ! They even provide a beautiful contrast if you get those nice cremini or brown-topped button mushrooms. 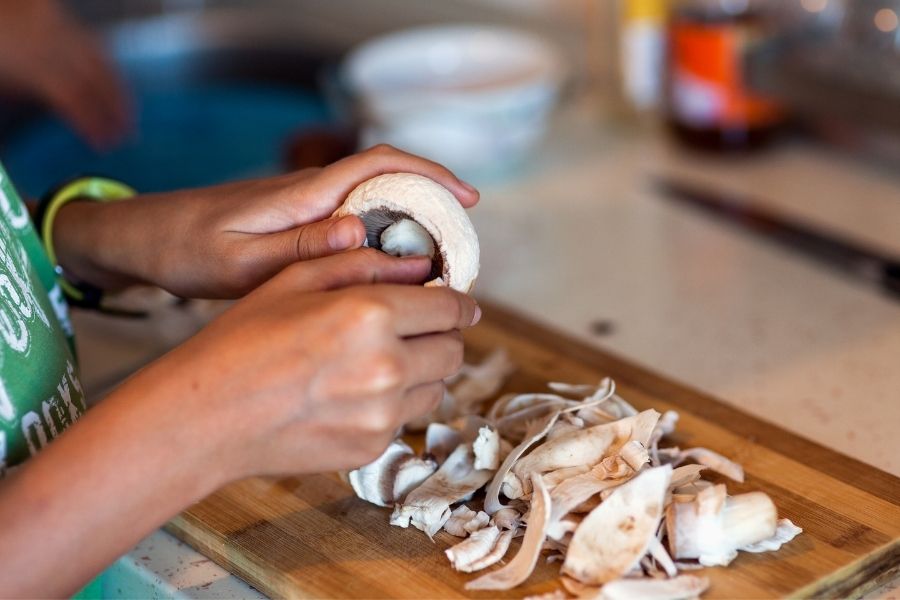 Can you eat raw mushrooms ?

You may eat raw mushrooms, but in small amounts, and only if you’re sure they come from a safe source. Champignon and portobello mushrooms are safe to eat raw, but you may not like the texture (very spongy).

Fun fact: portobello and champignons (buttons) are the same mushroom, Portobello is the name they get when they mature and their tops separate from the stems.

Should you wash mushrooms ?

Yes, always wash the mushrooms before cooking. Especially if you’re planning on using them raw. As you wash the mushrooms you will notice some bits of dirt come off. If you see any dirt that is stubborn rub at it with your thumb until it goes away. If not, you can simply cut it away.

When washing mushrooms, especially oyster mushrooms, be aware they’re soaking up some of that water. Mushrooms adore moisture, it’s why they grow so well after a storm, and especially in early autumn.

So mushrooms that have been washed will release more water as they cook, just keep that in mind. You can cook it off or use it as part of the broth or cooking liquid.

Should you remove mushroom stems ?

You can leave the mushroom stems on, especially if they’re small mushrooms. In the case of oyster mushrooms, the bottom of the cluster (stem) will be tougher. So you want to cut that off, and chop it finely to make sure it softens and cooks all the way through.

In the case of large portobellos you can remove the stems to make cleaning and cutting easier. You can still use the stems, but when they’re so big they become a bit spongy and hollow inside. The tops are fine to use though, don’t worry.

Should you remove the gills on mushrooms ?

It’s up to you if you want to remove the gills on mushrooms. They contain the mushroom spores (harmless to humans) and they may break down as the mushrooms are cooking. It’s not a problem, since they don’t affect the taste of the meal whether you leave them on or not.

The gills are simply where the mushroom keeps its ‘seeds’. If you try to remove they they easily come off the caps, but it’s a tedious and pointless effort, unless you really hate their look.

Read also: Why Is Garlic Sticky ?

Why are my mushrooms cooking a darker color ?

Mushrooms cook a darker color because of two reasons: their tissue breaks down and looks ‘wet’, and their gills release spores that dissolve and color the cooking water.

You see, mushrooms gills are typically darker in color than the rest of the mushrooms. They contain the tiny little spores that are the basis for new mushrooms (like seeds), and as you cook the mushrooms the heat dissolves the spores into the cooking liquid. 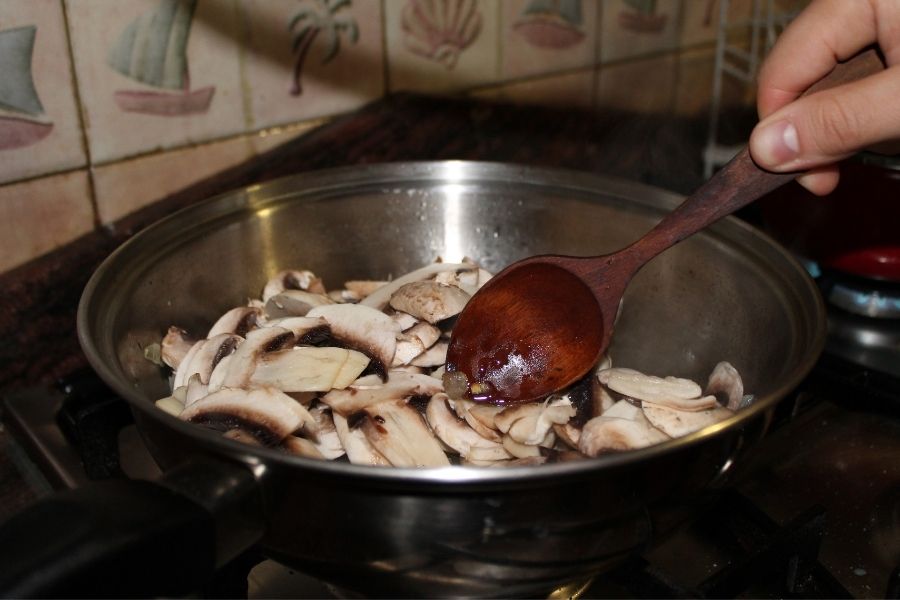 That liquid will stain everything and turn it a darker color. This is why mushroom-everything has a darker hue to it, sometimes dark brown, sometimes a little gray.

In short, there’s nothing wrong with the dark water, it’s simply the mushrooms cooking. If you’d like to avoid that, there are two potions.

First, you can remove the gills from the mushrooms before you cook them, and make sure there’s nothing left. Rinse them thoroughly. The water will still darken a little, but nowhere near as much as before.

Second, you can use canned, pre-cooked mushrooms. These have already been cooked and rinsed so they won’t leave any extra color in your meal. An upside to these is that they’re great to use as-is in salads or to add to a meal that’s almost done cooking.

Mushrooms are fungi, and different from plants

Mushrooms work very differently from other vegetables, simply because they’re not, in reality, a plant. Mushrooms are fungi, meaning they spread through spores instead of seeds. They don’t develop a root system, but rather grow into a single mass.

You’ve definitely seem mushrooms that have fused together. Well that’s not because there were two seeds in the same pod, but because if allowed to grow large enough, mushrooms will eventually merge together.

Have you ever noticed the white fuzz that grows on some mushrooms in the supermarket ? Those a spores that have started to reach out to the other mushrooms in the pack. Similarly, several mushrooms that grow large enough to touch caps will eventually fuse together, with the fuzz acting as a connective tissue.

In short, if you’ve never cooked with mushrooms before (or rarely), it’s worth remembering the info in this post. Mushrooms are very different from plants, yes, and this makes them even more interesting. They’re great in pretty mush every dish you can throw them in, and in many cases they’re a perfectly good substitute for meat.

For example our best pasta ever was a porcini and Parmesan pasta. It was heavenly, and fresh mushrooms really make a difference.