Raw mushrooms may sound like a bad idea, but really how bad are they ?

Can you actually eat raw mushrooms ? Are they safe ? If yes, what mushrooms can you eat ?

This is what we’re aiming to answer today, and hopefully get a really good understanding of just why folks are averse to eating raw mushrooms in the first place. 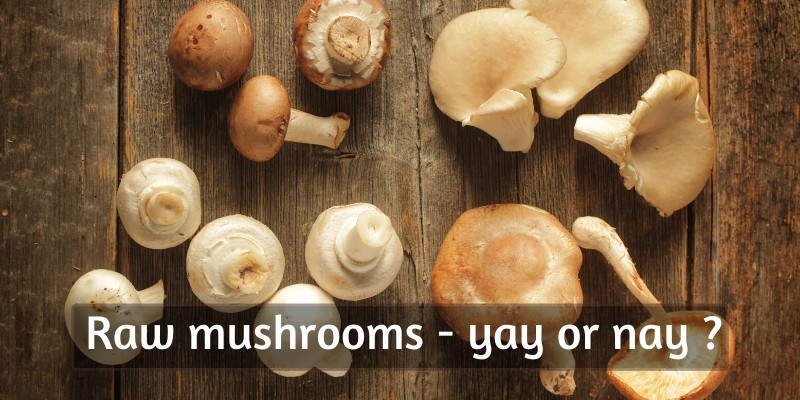 Table Of Content show
1 What’s a mushroom made of ?
2 There’s a difference in texture
3 What mushrooms can you eat raw ?
4 Are mushrooms healthier cooked or raw ?
4.1 Cooking kills any bacteria that may be lurking

What’s a mushroom made of ?

We’re going to talk about the white mushroom for this part, since it’s probably the most common type you’ll find on shelves and in your home.

If you’re not sure what those are, white mushrooms are champignons, button, table or small Portobello mushrooms.

You can also find their very close cousins, the brown capped mushrooms, with pretty much the same nutritional makeup and they’re stocked right next to each other.

And alongside them you’ll find oyster mushrooms, the very large, wide ones and those are pretty mush the best (in terms of texture) for meat substitutes.

But right now let’s talk white mushrooms. The USFDA (source) says that 100 grams of white, raw mushrooms are made up of:

There’s really not much there that’s going to hurt or sit badly with you if you eat them raw.

And if you’ve ever cooked mushrooms you know they give a whole lot of water and really shrink when cooked.

What most folks worry about though is agaritine. If you don’t know what that is, it’s basically a naturally occurring compound that has been noticed to promote cancer in mice studies, mostly by messing with the DNA structure.

Now, one thing to note about agaritine and the mice studies is that another set of mice were fed agaritine-spiked water for their entire lives and were fine. So that’s a bit confusing.

Another fact is that agaritine is present in freshly picked mushrooms, but its levels go down significantly when it’s been subjected to any cooking or storing.

Meaning high heat AND refrigeration will make it go down, as will simply storing the mushrooms.

As long as your mushrooms are store-bought, they’ve been refrigerated and stored for a couple of days before they got in your own fridge.

That being said, if you’re growing your own mushrooms and you’re literally just picked them, then yes they may just have more fo that compound.

Let’s talk about eating them for a second because this is what’s got everyone in a twist. 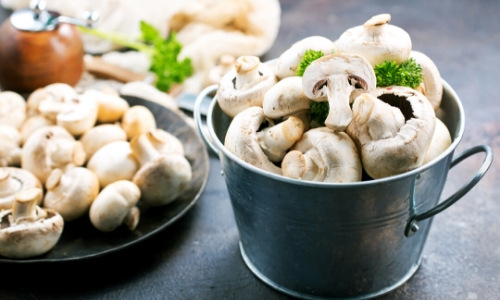 There’s a difference in texture

Circling back to texture, we should really ask ourselves if we even want to eat raw mushrooms.

If you’ve only had cooked mushrooms then you know their soft texture. But if you eat them raw they won’t be as soft and their flavor is going to be very different.

Much more earthy and stronger in general, and that’s not for everyone. If you’re a fan of mushrooms in general then you’d probably love them raw, but if you’re the type who likes to drown mushrooms in garlic then you probably won’t enjoy them as much.

What mushrooms can you eat raw ?

For the most part any edible mushroom can be eaten raw, at least in theory.

There are tougher mushrooms like the oyster mushrooms that really need some cooking to soften up, as do boletus-type mushrooms (like the Penny Bun or Porcini). 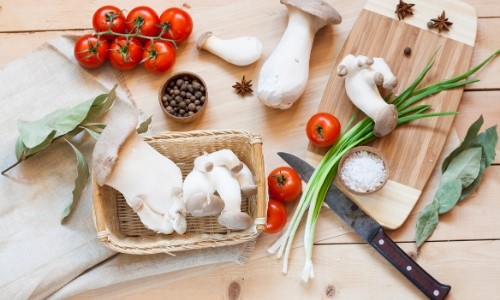 The white button mushrooms, as well as their brown capped cousins are alright to eat as-is, as long as you wash them very thoroughly and check between their gills.

However these two belong to the genus Agaricus, and have the highest amounts of agaritine. If you’re worried about that part, maybe skip these. If you want to give them a try, go ahead.

Reishi mushrooms are tough and you actually need to cook them through if you want to eat them.

In short most of the edible mushrooms you can find can also be eaten raw, but we suggest really thinking about the difference in texture since it’s a big change from cooked mushrooms, and worth noting.

Are mushrooms healthier cooked or raw ?

From a certain standpoint mushrooms seems to be healthier if cooked.

This is mostly due to their tough cell walls, which are pretty much keeping the nutrients locked in. Heat breaks down those walls and helps the body absorb them better.

That being said, you will get a certain amount of nutritional value from raw mushrooms, just not as much as if they were cooked.

We should also take a step back here and take a look at our plate. If we’re after nutrition then 3 medium sized Portobellos once a week will not affect our diet.

Nutrition and diets are very complex and you need commitment for them to work.

Much like with health benefits derived from green tea or health supplements, being inconsistent with them will not get any results. 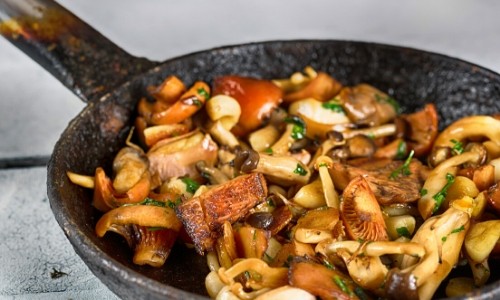 Cooking kills any bacteria that may be lurking

To be absolutely safe and sound, you may indeed need to cook mushrooms. Any bacteria, viruses or spores present on them will die off if they’re kept at high heat for several minutes so it’s best to cook them from a food safety standpoint.

All that being said, it’s completely up to you to decide if you want to eat your mushrooms raw.

Keep in mind that there’s a difference both in texture and in flavor. It might be a good thing, it might be a bad thing, it really varies from person to person.

As for agaritine, you should take a look at how often you eat mushrooms, how much of them you eat, and what type. If your general intake is low then you’re probably fine with them raw as well.