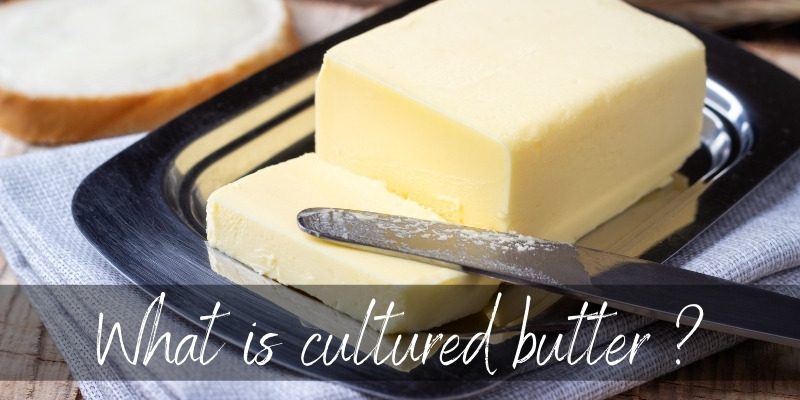 What is cultured butter ?

Cultured butter is a type of butter made from dairy that has already fermented slightly. It could be any mixture of cream and butter milk or yogurt. As long as there is a live culture present in the milkfat, it will transfer to the butter.

The amount of lactobacillus bacteria is not as much as you would find in yogurt, but it’s definitely higher than in regular butter. Bacteria transform milk sugars into lactic acid during fermentation, turning it tangy and some people absolutely love this in their butter. The butter made from pasteurized cream is called sweet cream butter, and is what most people think of when butter is called for.

Contrary to popular belief butter is not cultured because it went to Harvard, although it would’ve made for a great story.
Read also: Does Caramel Have Dairy ?

Why is butter cultured?

Butter can be cultured because the cream is already somewhat fermented. It’s quite common for using fermentation as a way to preserve dairy products, which significantly prolongs their shelf life.
Ans butter may be cultured simply for flavor’s sake. The same way some brands of dairy produce flavored butter – herbs, spices, or just salted – some add a bit of tang to their butter.

Cultured butter tastes much like regular butter, but with the sharp tang of sour cream. Some butter brands may have a mild version, and some may have a stronger version available.

Sweet butter is made from cream from milk that has been pasteurized and is the most common butter found in USA, Great Britain and Australia and has a mild creamy taste.
Cultured butter is usually made with somewhat fermented cream, or it’s made from pasteurized cream but it has lactic acid added to it to form the bacterial colonies. The latter way of making cultured butter is preferred in industrial production because the producer can control the process to give a consistent taste to the butter.
This kind of butter has a richer, more buttery and savory taste. Cultured butter is prevalent in continental Europe and you can often find it in other places around the world marketed as European style butter.
Both butter styles can be salted or unsalted, each having different uses in cooking. The unsalted one is mostly used in baking while salted butter is used mostly at home for cooking or spread on bread.

What do you use cultured butter for ?

Cultured butter can be used for any sort of recipe that would normally call for sweet cream butter. It adds a slight tang to baked goods and sweets, and it enriches savory recipes.

Many people have started to make homemade cultured butter to have that richness in taste. There are some recipes where you want the taste of butter to stand out such as: biscuits, cakes, pancakes and if you think any dish that requires butter, especially that big slice of steak you want to sear in your pan with a sprig of rosemary and some garlic.
Whenever you want to make a recipe that requires butter as an ingredient try using cultured butter instead and see how it will change your dish. But mostly, cultured butter makes the biggest difference when it comes to baking, in terms of texture and flavor.
Just because it’s cultured butter doesn’t mean the quantity of the ingredients change, always use the quantity specified in the recipe.

What is clarified butter ? 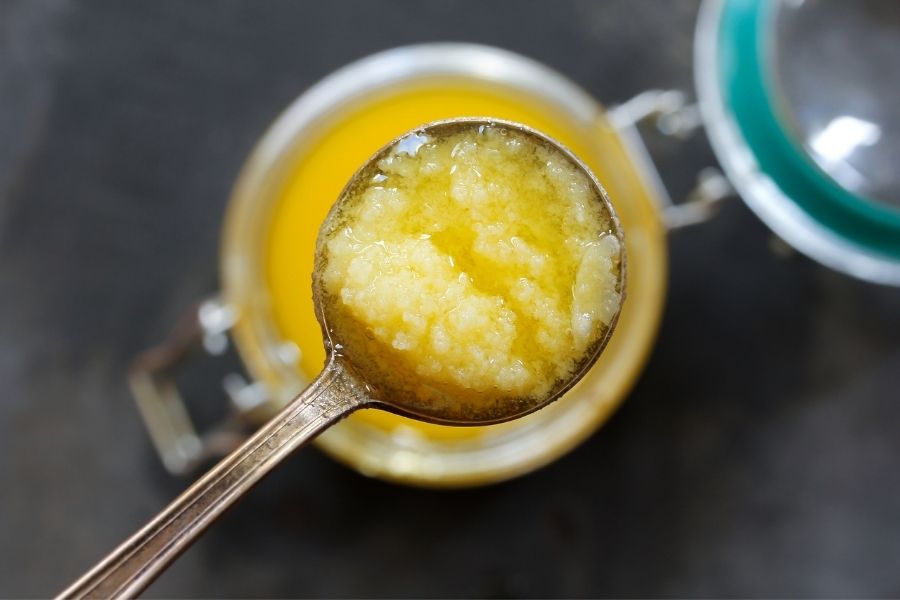 The most common use for clarified butter is added instead of other oils to fry or roast food. Due to its higher smoking point, clarified butter is much better than other butters when it comes to frying and still giving that good buttery taste you want.

While Ghee and clarified butter might be very similar in the process of making them they are different. Making ghee starts the same as clarified butter but after the water evaporates and the milk solids form you cook it just a bit more so the milk solids turn slightly brown giving ghee a nutty flavor to it. The milk solids are not separated from the fat in ghee.
Ghee is traditional in the Middle East and South Asia as a main cooking fat. It boasts the same shelf life as clarified butter and a high smoking point.
Since cultured butter usually contains a higher percentage of butterfat it has and gives a more buttery taste to everything it touches and if you like that taste you should definitely switch to using cultured butter as an ingredient in any dish, even on a slice of bread with some jam on top, some toast with butter and garlic or on top of those pancakes with some maple syrup. And most likely all Europeans would recommend you cultured butter over anything else.