Beets are not the most common side dish, and they’re definitely not for everyone. They’ve got a vaguely sweet and earthy aroma, and the brightest, deepest red you’ve ever seen. Even if you don’t like beets, you have to admit their color is simply amazing. It’s so strong and pigmented it’s used in many foods as an edible pigment !

So what makes beets red ? Is it any different from other red fruits and vegetables ? And why is beetroot sweet, does it have to do with the color ? Let’s take a closer look at the humble yet striking beetroot, and discover its secrets ! 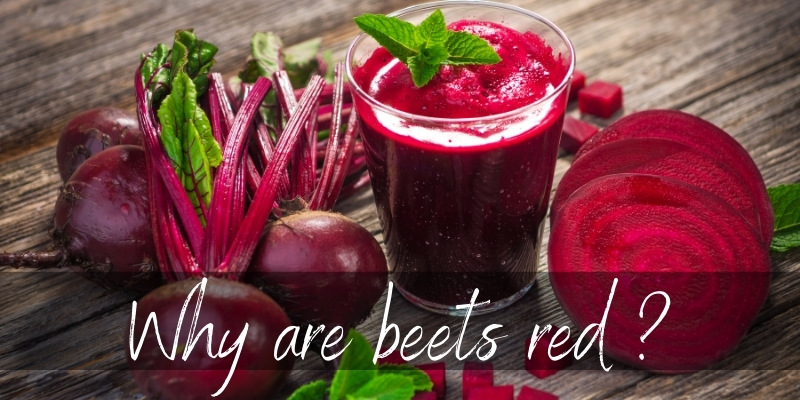 Table Of Content show
1 What makes beets red ?
1.1 Are beets red or purple ?
2 Why is beetroot sweet ?
2.1 Yellow beets are a bit sweeter than red
3 Tips on cooking beets
3.1 Bake beets instead of boiling them
3.2 Use aluminum foil to separate the pan
3.3 Always use gloves when handling beets
3.4 Leave the skin on if boiling beets
4 Can you eat beets raw ?
4.1 How do you pick the perfect beets ?

Beetroots are red because they contain a natural pigment called betanin, which is part of the betalain pigment family. It is a stand-in for anthocyanin pigments, and it will change color according to the pH of the beet.

Beets are a deep, purplish red because betanin ranges from red to blue. On a more alkaline level, it turns a purplish blue. So, beets are mostly acidic by their pH, as exposed to betanin.

What’s interesting about all of this is the yellow beet color. Yellow beets get their color from the hydrolysis of betanin, which results in a yellow hue. This is because yellow beets are alkaline, the opposite of acidic. So they skip past blue and turn yellow.

Are beets red or purple ?

The exact color of beets is best described as reddish-purple. It is not a bright, deep, orange-hued red. It has a distinct blue tone, making it more of a purplish red than an orange-red (like tomatoes for example).

Read also: Do Raspberries Have Seeds ?

Why is beetroot sweet ?

Beetroot is sweet because its pigment, betanin, has a sugar molecule bound to it. As beets have so much pigment, they also have a high amount of sugar. For example 100 gr of raw beetroot has 7 gr of sugar.

And as you cook them, the sugars caramelize and become even sweeter. Most of the juice from a roast beetroot evaporates, leading to a very concentrated flavor. This is why roast beetroot is so sweet.

Yellow beets are a bit sweeter than red

If you’re looking for a sweeter beetroot, you may want to try the yellow one. being alkaline, it has no tartness to cut through the sweetness. So it may contain the same amount of sugar, but simply appear sweeter.

Whichever you use, beetroots are delicious in their own way and they’re a great way to change up the usual side-dish lineup. 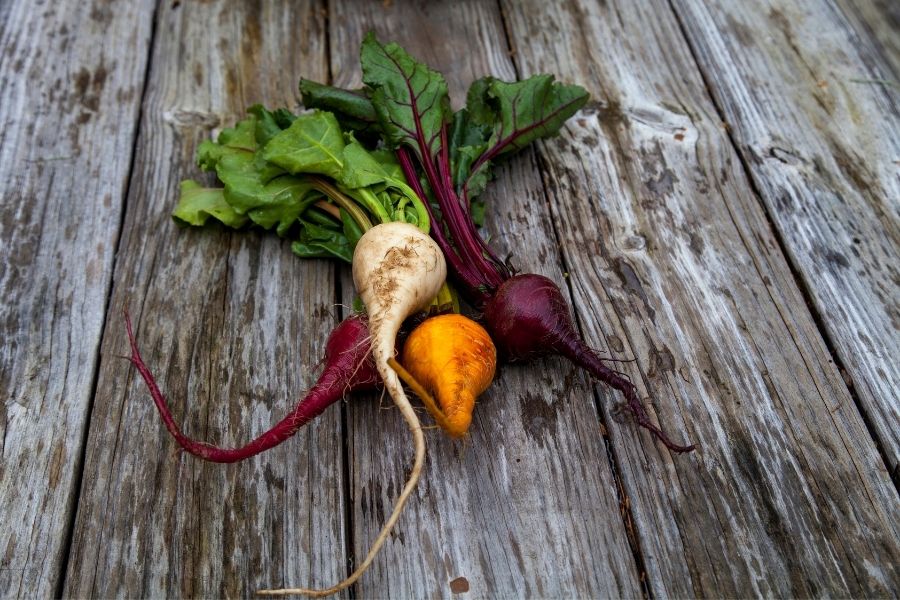 When you’re using beets in your food, you’re likely cooking them. So we’re going to take a look at some of the best tips we’ve found for cooking beets, including what they pair best with. Keep in mind that these veggies are root vegetables, and may not be everyone’s favorite due to their earthy flavor, never mind the sweetness.

Bake beets instead of boiling them

If you’re looking for a lot of flavor, then go ahead and bake the beets instead of boiling or steaming them. This way you don’t dilute the flavor with water, and you get a nice caramelization going.

We recommend cutting the beets in quarters and peeling them before you turn on the oven.

Use aluminum foil to separate the pan

If you’re baking several types of vegetables in one go, then you may not want to stain them with beet juice. So in the baking pan, place some aluminum foil and shape it as a second, smaller pan or dish. Place the beets inside the dish to contain any runoff juices.

Or, you can simply use another pan inside the first pan, or two separate pans if you’ve got the space in the oven.

Always use gloves when handling beets

Beets are notorious for staining absolutely everything. So make sure you wear gloves when handling them, otherwise you’re going to wash your hands a lot. If you do get beet juice on your hands, remove it with some vinegar, and then wash your hands with a bit of dish soap.

You can remove been juice from cutting boards with vinegar or lemon juice, and coarse salt. Rub the area well, rise, then pat dry with a paper towel.

Leave the skin on if boiling beets

If you’ve decided to boil your beets, you can leave the skin on. It’s much easier to rub or peel off when the beet is cooked, instead of raw. And if you’re peeling raw beets, you may still want to use a vegetable peeler. A knife may slip form your hands and cause an injury.

Can you eat beets raw ?

You can eat raw beets, yes, but you may not like the texture. It’s a bit crunchy and has a pronounced earthy flavor, so it can easily get too strong.

You can add raw beet to a salad, either by slicing it thin with a mandolin, or by shredding it onto the food. Remember that beets are very, very pigmented and your food will get a purplish stain on it.

Read Also: Is Ginger A Fruit Or Vegetable?

How do you pick the perfect beets ?

And that’s pretty much it. Fresh, raw beets are not as tender as cooked beets, but that doesn’t mean you shouldn’t give them a try. Be sure to enjoy that beautiful red color of beets, because it can really bring a dish to life.