Butter is widely known for being a beautiful, creamy yellow kind of color. It’s what we associate with the words ‘rich’, ‘delicious’, ‘decadent’ because it simply brings that much more flavor and richness to anything you’re making (sweet or savory). But when you think about it, butter is essentially made from milk, well actually cream.

But milk is white, so why is butter yellow ? And why isn’t all butter yellow, and some are almost white ? It turns out there’s a good reason butter is nearly always yellow, so let’s take a look. 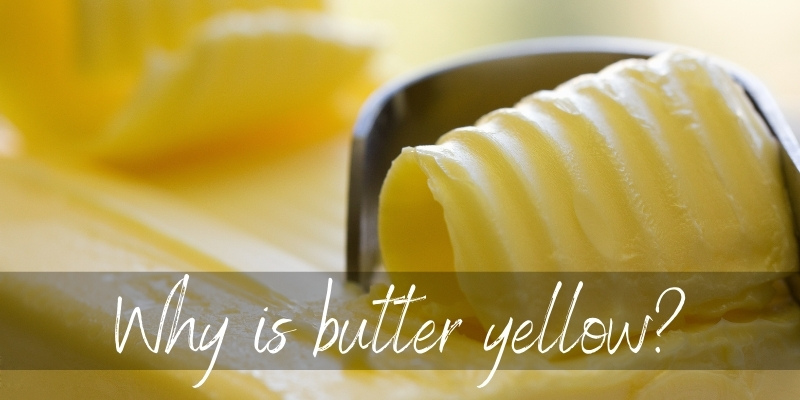 Table Of Content show
1 Why is butter yellow ?
1.1 What the cows eat
1.2 What colors are added
2 Why is homemade butter white ?
2.1 Consider browning your butter
3 Why is British and Irish butter so yellow ?
4 Is yellow or white butter better ?

Why is butter yellow ?

Butter is yellow because it contains beta-carotene, a yellow-orange pigment derived from what the cows eat – grass and grains. More grass and hay usually means yellow butter. Beta-carotene is a fat-soluble pigment, meaning it will easily transfer through, and show up in fat molecules, like butter.

When the butter was only made on farms, the cows were almost exclusively fed grass and hay. The butter was always a creamy yellow, but it wasn’t as strong a color as you may imagine. Once commercial dairy farms sprang up, cows’ diets shifted and they started to include more grains, and less grass.

This resulted in a lighter color butter, which many people associated with ‘poor’ quality butter. So, nowadays a bit of food coloring is added, usually by means of beta-carotene or annatto (like for cheddar).

What the cows eat

Grass-fed cows actually produce a naturally yellow hued butter, but it’s never going to be a distinct, deep yellow without any added coloring. The yellow butter of the past was not that yellow, to be fair. Butter does oxidize a bit, and the very outside darkens in color, which may contribute to the color everyone expects from it.

What colors are added

So if a cow’s diet matters so much, and most cows today aren’t left out on fields to graze, why is the butter still so yellow ? Food coloring, in very small amounts. People have come to expect butter to be a nice shade of creamy yellow, even if it’s a bit far from the original butter color. BY original butter color we mean the kind of off-white a cow could produce if eating only grass.

Why is homemade butter white ?

Home-made butter can turn out quite white if you don’t add any color to it. It won’t be pure white, but it will be whiter than whatever butter you can buy at a supermarket, guaranteed. 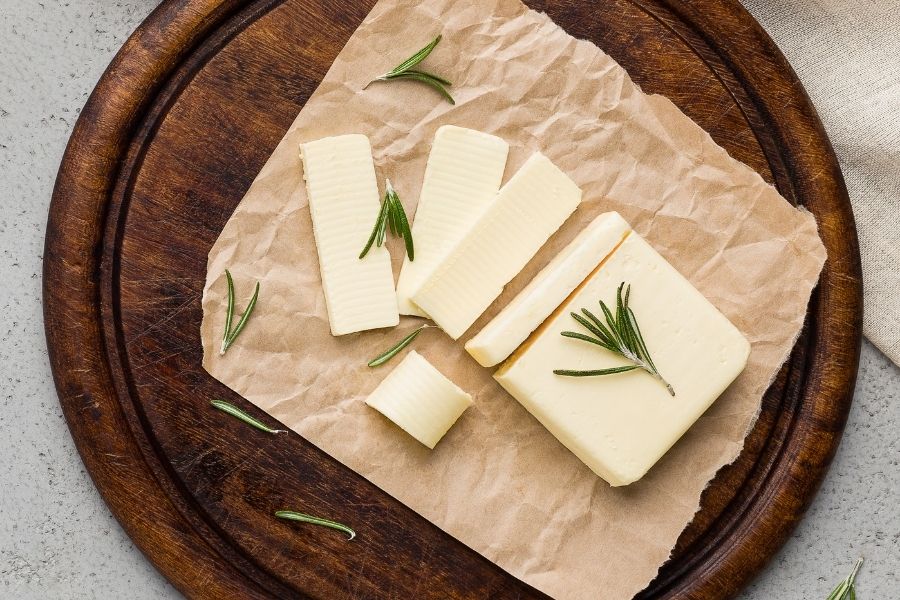 The whiteness has to do with the milk, how much fat is in it, and what the cows were fed. Skimmed milk – like 1.5% or less – is a very poor option for making cream. Even 3.5% is small, because you need actual cream. If you’re buying pasteurized, homogenized milk from the store the cream will never separate.

Read also: Why Is Butter Solid At Room Temperature ?

So, you need fresh, raw milk that is whole, not skimmed, and let that sit in the fridge for a couple of days so the cream separates. If the cows that provided the milk were fed a mostly grass and hay diet, your butter will likely turn out creamy yellow.

If they were fed mostly grains, it will be a paler shade. In some cases even the cow’s genetics may play a role in how well the pigment transfers into the fat molecules.

Don’t despair if your home-made butter isn’t yellow ! You can always add a bit of color, and here are a couple of ideas:

Even if you decide not to add some color, you’ll notice that just a pinch of salt will work wonders in terms of flavor. Not enough salt to make this into a stick of salted butter, but just enough to you can detect the actual flavor of the butter.

If you’re looking for a butter that’s darker in color, and has a better taste, consider browning it. You can take this in three different directions: ghee, clarified butter, or browned butter. There are only slight differences, but the process is the same.

You need butter, any butter, even the white homemade one will do. Get a pan, and put your butter there, turn the heat on low. Let the butter melt and start to bubble. Keep an eye on it, and keep stirring it. The milk solids will be on the bottom, toasting and giving the butter a darker color and a nutty flavor.

The foam is simply the leftover when evaporating. You should try skimming it as much as possible. Once the foam on top starts to settle into smaller bubbles, you have a choice:

A word on ghee and brown butter: their major difference is whether they’ve got mil solids or not. But while you’re making these, they can burn in a matter of seconds, so do not take your eyes off the pan. It’s better to stop the pan quicker than later.

All three butters (clarified, brown, and ghee) will solidify at room temperature, but not as much as regular butter.

Why is British and Irish butter so yellow ?

British and Irish butter are very yellow because the cows are fed almost exclusively grass. Back when Ireland was first made part of the UK, it was primarily used to raise cattle. Lush, rolling hills with plenty of grass to raise cattle meant good meat, and good milk.

Ireland has since been split in two parts: Northern Ireland (part of the UK), and the Republic of Ireland, a self-governing country. So British and Northern Irish butters are still a darker hue of creamy yellow, because they have access to the Irish grass. And the butter from the Republic of Ireland has access to the same kind of grassy hills, can can produce the same quality butter.

In truth, the quality is not dictated by the color of the butter, but people still perceive a very yellow butter to mean one very high in fat, thus a great butter.

Is yellow or white butter better ?

The color of a stick of butter does not decide its quality, but rather the percentage of butterfat in it. And when comparing white and yellow butter, we have to look at where the milk came from.

It could be that they are both made from the same batch of milk, in which case the yellow one is higher in fat, thus better tasting. This means the whiter one has milk whey in it, thus less fat, so it will be less flavorful.

But it could also be that the milk used simply did not have as much beta-carotene in it, in which case even the 82% butter would still look pretty white.

So in short, always look at the butterfat content, not the color. Color can be easily manipulated and you can end up with a mediocre-tasting butter that was dyed yellow.