Milk is one of this foods that people just grow up with, without really questioning anything about it. Most folks know what milk tastes like, what it looks like, what it smells like, and so on.

We’ve always known milk as being white, or off-white. But why is that, why is milk white ? More importantly, why is it white of the butter is yellow ? Well today we’re going to tackle this topic and hopefully give you the answers you’re looking for. 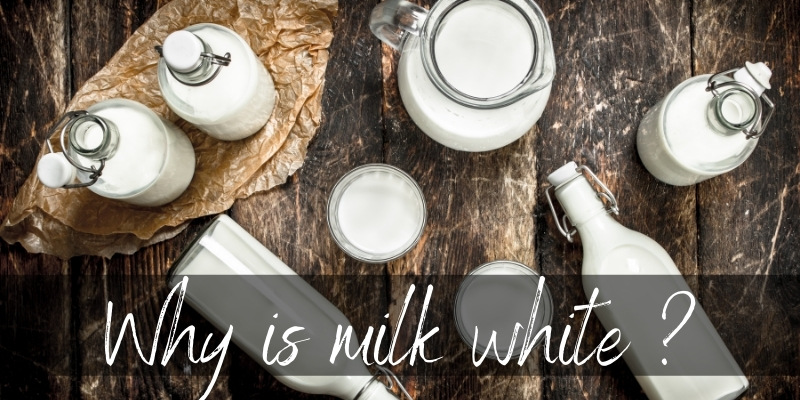 Why is milk white ?

Milk is white because the different fat and protein molecules reflect the entire light spectrum – the entire rainbow, making it appear white. Despite being mostly water, milk also contains 3-6% fat, and then protein. Both are scattered evenly through the whey/liquid, bringing the exact same light reflected throughout all of the milk.

Another reason is because the butterfat present in the milk is opaque. When butter is heated, it turns transparent, with a yellowish tinge. When it’s solid (cold), you can’t see through it. This is the same in milk, except the particles are so very very tiny you can’t see them with the naked eye.

But you can see their effect on the liquid, reflecting a lot of white light back.

Why is milk opaque ?

Milk is able to reflect white light so evenly because it’s entirely opaque. And milk is opaque because it’s a suspension, meaning all of the molecules are evenly dispersed, and do not dissolve into the liquid.

Since milk also contains tiny fat and protein molecules, and they are evenly dispersed, they make the milk appear opaque. Try removing a good option of the protein and/or fats in milk. You’d end up with a semi-translucent liquid, pretty similar to whey.

In fact, whey is translucent when you look through it. Conversely, if you were to take a few drops of milk and put them into a glass of plain water, you’d notice the water would turn cloudy but you could see through it.

Read also: Why Does Milk Curdle ?

Why is milk white and butter yellow ?

Butter end up looking yellow because it contains beta carotene. That is a natural pigment found in most plants and foods, including grass, corn, and other grains cows may be fed with.

In America the corn industry is subsidized by the government, since a large portion of it is used to feel livestock. Corn does have a significant amount of beta carotene, and that is transferred to the milk, and then the butterfat present in the milk. 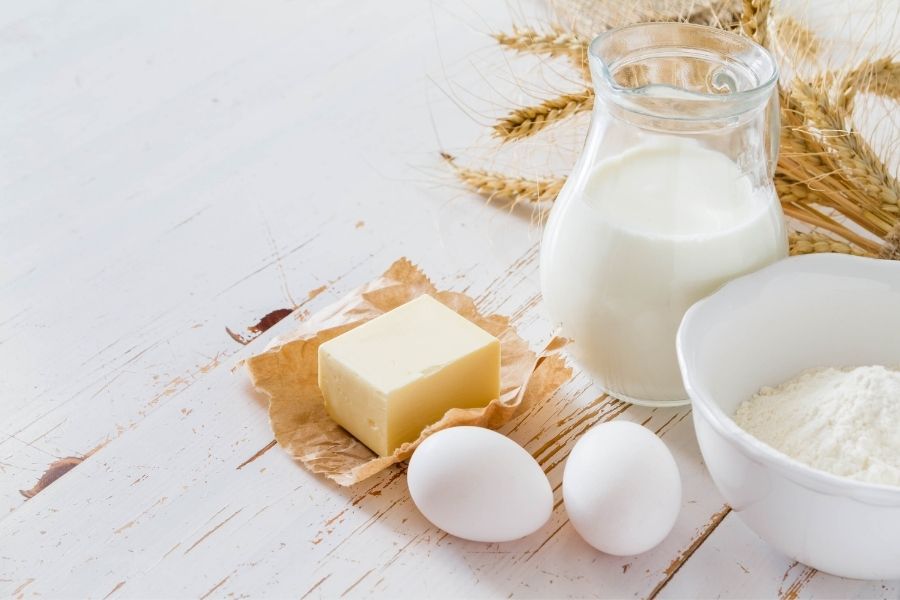 Grass fed cows still have a yellowish butter, but it’s a little paler. Surprised grass has beta carotene ? Well don’t be, because all the colors around us are made up of different pigments, and grass gets it color from a mixture or chloropyll and beta carotene, with the latter in the least amount.

You may be wondering why you can’t see the yellow butterfat in the milk. The thing is, it’s not hidden. But the fat particles are so very small, they blend into the rest of the suspension and present that creamy white color.

Back in the day, before milk was pasteurized, you could notice the fat and cream settling at the top of a milk bottle. This milk was raw, unprocessed milk and it spoiled whiting a couple of days.

Nowadays milk is homogenized, and then pasteurized. Homogenized is just milk that’s been run through a very fine sieve, on high pressure, to make all the fat particles very small, so they don’t clump together and disperse evenly in the milk.

This keeps milk stable for weeks, even months if properly packaged and stored at cold temperatures. Then, pasteurization means the milk is brought near the boiling point for a couple of seconds to kill of any bacteria that may try to multiply in the milk carton. Again, a measure to keep milk safe and stable.

Does milk contain blood and pus ?

No, milk does not contain blood or pus. It could, if the cow was sick and has an infection in the udder. But in that case, the cow is not milked and is treated for its condition. Any milk that may be off is immediately discarded by the farmers or milk companies.

We’re not sure where this rumor started or how people got to such an idea, but rest assured the milk in your carton is safe.

Why does fresh, raw milk smell ?

There is a certain, animal smell to fresh, raw milk. Milk that’s just come from the udder will have the cow’s scent in it, the same way goat or sheep meat will taste the way the animal smells.

There’s nothing wrong with a fresh, raw milk that smells like cow. It’s actually a sign that the milk is fresh, and hasn’t even been boiled yet. It’s a natural part of the milk’s lifecycle, and for the past few decades we’ve gotten so used to carton milk we forgot that cows smell.

Yes, they do. All animals smell, and that’s okay. If you were to milk a goat, guess what ? That milk would smell goaty, and even taste goaty.