Cauliflower is enjoying a whole new love, as it’s been recognized as a healthy food in the past decade. You’ll find it in many healthy substitutes, primarily low-carb ones like cauliflower rice, cauliflower pizza crust, cauliflower roast, and so on. One thing is always constant: the color.

Cauliflower is white, and we’ve always taken that for granted. But did we ever stop to think why cauliflower is white in the first place ? After all it’s from the same family as broccoli, asparagus, cabbage, Brussel sprouts. And those are always different shades of green, with some purple tinges. So why is cauliflower the odd one out ? Does it mean anything ? Let’s take a look. 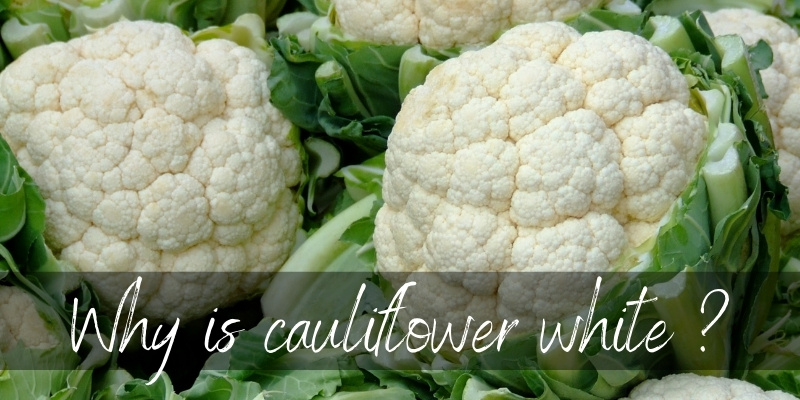 Why is cauliflower white ?

Cauliflower heads are always white because they grow and mature completely covered by their leaves. Farmers tie the largest outer leaves of each cauliflower plant. This protects them from direct sunlight, leading to no chlorophyll development – the green pigment present in many vegetables.

So cauliflower is white because the sun does not reach the florets. Otherwise it would have a yellowish-green tinge.

Actually, cauliflower comes in different colors, but we only ever see the white one. The reason behind this is mostly tradition and what consumers expect. The original cauliflower was white, thousands of years ago. So that’s what they knew to expect when they went to buy cauliflower.

But as time went on, different varieties happened either through cross-pollination, or were developed through a natural mutation and later perfects.

Purple, orange, and light green, white cauliflower are all varieties you can find on the market, but you have to look hard for them.

The purple cauliflower has a high incidence of the anthocyanin pigment, which runs from blue to red, depending on how acidic or alkaline the soil is. It’s what give asparagus spears that purple tinge, and sometimes broccoli heads too. 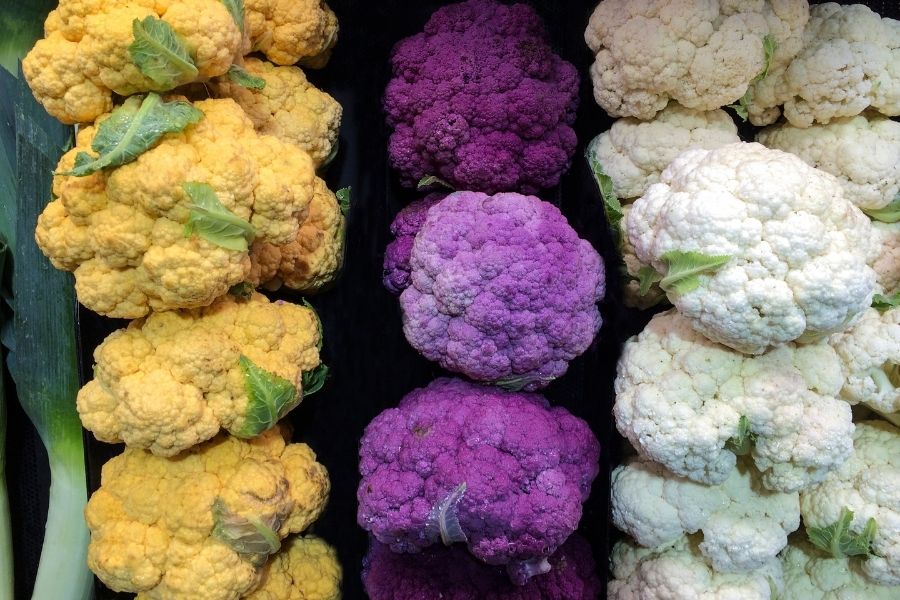 Read also: Should Eggplants Be Refrigerated ?

And light green cauliflower is the result of a cross-pollination between broccoli and cauliflower, resulting in a hybrid. There are two varieties, the ones that look just like cauliflower (called broccoflower), and another called Romanesco. This variety looks strange and very fractal-like, but is just as good as the regular broccoflower.

Why is cauliflower white and broccoli green ?

When a broccoli plant grows, it grows tall and its leaves fan out and spread all around the stalk. The green head is left on top, developing chlorophyll as the sun reaches it.

Cauliflower plants are low-lying, like cabbages. Their many leaves stay furled for much longer. When they do unfurl, the sun may get a chance to develop a yellowish tinge on the cauliflower heads. Consumers do not want this, as we’ve come to know white cauliflower is the only one.

So, farmers take the biggest leaves from around the outside of the plant, and tie them together at the top. Yep, a sort of cauliflower ponytail. It keeps the white head covered by shade, resulting in a completely white cauliflower when harvest time rolls around.

So in short, it’s the lack of direct sunlight that prevents cauliflower from turning green, or even light yellow.

Now let’s take a look at some of the most common issues when cooking this beautiful vegetable. After all the hard work that goes into preserving its color, it’d be a shame to not cook it properly. Still, this pretty thing often gets a poor treatment, simply because its texture changes so rapidly you have to be very careful when cooking it. Now let’s take a look.

1. You use olive oil or butter

When cooking cauliflower in any way, shape, or form, you need to add a little bit of fat or oil. You may reach for olive oil, as that’s healthier and more delicious. Or you may reach for butter, for that beautiful aroma.

The problem is that both olive oil and butter have a low, low smoking point. You can bake or roast anything in butter or olive oil, as they will burn long before whatever you’re cooking is done. And as you know, cauliflower is not ready in 5 minutes.

Instead use a higher smoke point oil, like canola, peanut oil, or just plain vegetable oil. You’ll get much better results and a non-bitter aroma.

2. You fry instead of bake

No matter what kind of oil or fat you’re using to cook your cauliflower, if you’re frying or sauteeing, you’re doing it wrong. The problem here lies in how the cauliflower is built. This vegetable has no flat surface, meaning it can’t and won’t fry or brown evenly. You will get uneven cooking in your cauliflower, unless you take the time to cut each floret into thick slices. And who does that ? 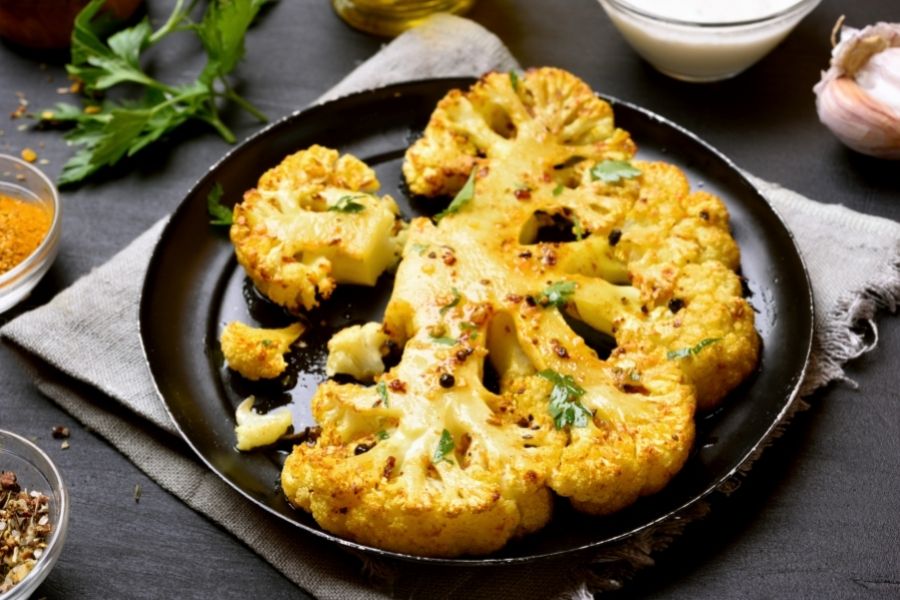 Read Also: Should Cauliflower Be Refrigerated ?

When cooking your cauliflower, bakes or boiled, you risk overcooking it if you go by time alone. Always make sure you don’t overcook it by checking it from time to time. Insert a fork into the thickest part, to see if it’s getting tender or it needs more time.

And never cook the cauliflower in one big head, always cut it in two (at least) when baking, or into florets and even-sized pieces when boiling.

And that’s pretty much it ! Your cauliflower should end up nice and soft, with a bit of texture left. This is a really good vegetables and one we should definitely have ore often. With the right seasoning it can really be your new favorite.