Are you running out of oil and there’s no point in keeping two nearly-empty bottles ? You’re probably wondering if you can mix the two oils. Well, the thing is you’re not the only one in this situation, so there’s info to help you out.

If you’ve got peanut oil and vegetable oil – two popular oils in America – then we’ve got you covered. 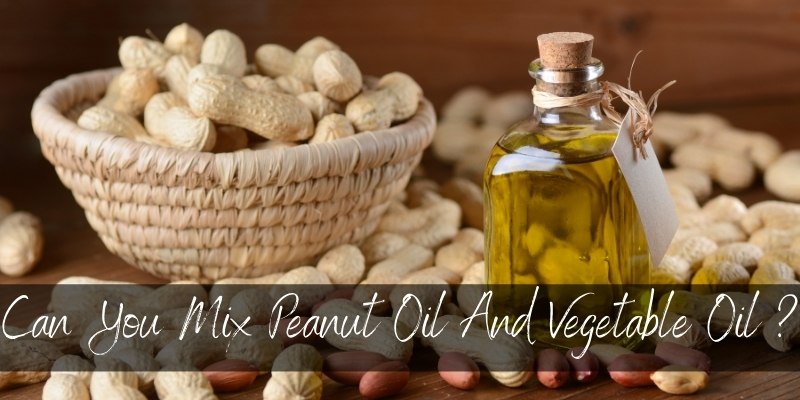 Table Of Content show
1 Can you mix peanut oil and vegetable oil ?
2 Can you mix cooking oils ?
3 What to know before mixing peanut oil with other oils
3.1 What happens when you mix in peanut oil
4 What type of oils can be mixed?
4.1 Can I mix peanut and canola oil?
5 Conclusion

Can you mix peanut oil and vegetable oil ?

That was just an example, but it’s the way these things work. Depending on your vegetable oil, the smoking point may be higher or lower than the peanut oil.

Mixing different types of oils is not a new thing. People keep doing it every time they run out of a particular oil. So, if you don’t have adequate vegetable oil to put it in your fryer, you can go on with some peanut oil.

So, the answer is, yes, you can mix peanut oil with vegetable oil while deep frying. However, you should remember that not all vegetable oils are made the same and you need to check the label.

Can you mix cooking oils ?

Generally, when cooking oils are processed, they are already mixed in a number of ways. As a matter of fact, vegetable oils that you use in your kitchens are a mix of many oils.

But the thing is, they are tested thousands of times before and after the mixing process. These tests are carried out to test the chemical performance, taste, smoking and melting point and compatibility.

The bottom line is, mixing oils isn’t a bad thing. There are some factors you won’t be able to know unless you’re a food scientist, of course, but the smoking point rule will always apply.

What to know before mixing peanut oil with other oils

The most important thing to keep in mind at the time of mixing different oils is the smoking point of each. The smoke point is defined as a point at which oil catches fire.

Because most deep fryers come with 375 F as the highest temperature, the good idea is to use the oils with a minimum of 400F smoke point. Peanut oil is usually one of those good, high smoke point oils.

When you want to mix certain oils, keep in mind the one with the lowest smoke point as that will burn the quickest. For example, if one type of oil has 350F smoke point and other has 400F smoke point, it is better to keep the cooking temperature below 350 degrees Fahrenheit.

Even if you mix the oils in 1:1 ratio, make sure your oils don’t exceed 350 F. The temperature won’t be an even mix between the two, because what the lower oil is made up of will still burn at 350 F.

Again, this is just an example. Be sure you know all the smoking points of your cooking oils before you mix them.

What happens when you mix in peanut oil

Generally, the common types of vegetable oils used for deep frying come with a neutral taste. This is important as they don’t alter the taste of food.

So obviously, if you want to mix peanut oil with your vegetable oil, you need to consider this factor. The thing with peanut oil is, it has a strong flavor which can infuse in the food when used in large quantities.

If it is mixed with other oils, it will add a subtle flavor. It won’t overpower the food, but it will be noticeable.

What type of oils can be mixed?

The only oils that are safe to mix are the ones with very similar smoking points. Although you can mix some common oils in less quantity, we don’t recommend mixing large batches of oil without knowing anything about their smoking point, taste and chemical properties.

And talking about vegetable oils, they are already made by mixing multiple varieties. Some common types of oil that are mixed include canola oil, safflower oil, sunflower oil, soya bean oil etc.

Again, this doesn’t mean you should mix large amount of oil on your own. It’s one thing to mix oils because you have a few spoonfuls of each, and another to mix a gallon of each. 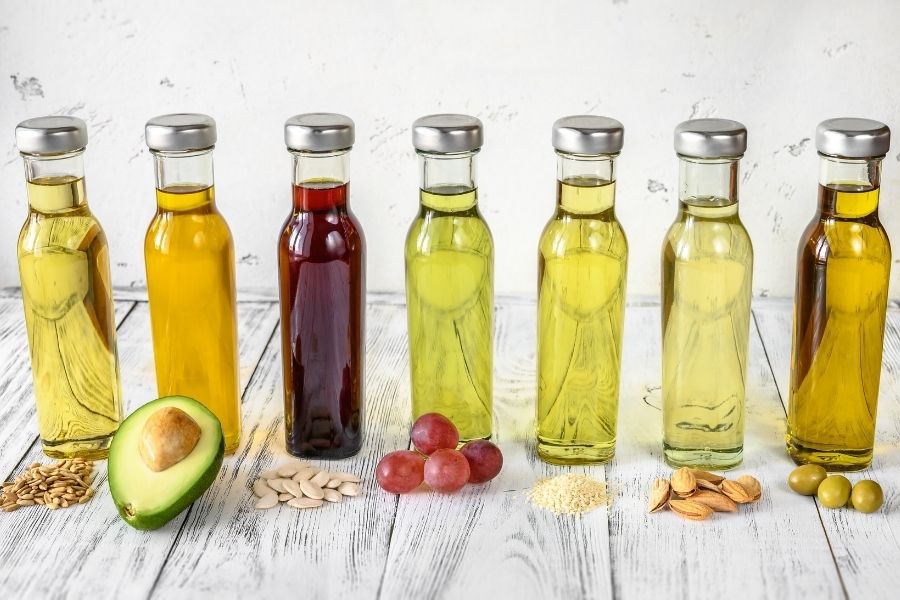 For example you should never mix a low smoke point with a high smoke point. An example of low smoke point is are flaxseed oils, walnut oil, or wheat germ oil. The unrefined, extravirgin and cold pressed oils (including olive oil) are of that type.

Can I mix peanut and canola oil?

Yes, you can mix both of these oils for a deep frying purpose. However, keep in mind that peanut oil has its own flavor and if you keep its quantity high, your final dish will have an aroma of it.

Both peanut oil and canola oil are high smoke point oils (over 400 F) so they will mix well, as long as you’re alright with the flavor.

Mixing oils for deep frying is a common practice. People do this very often when they run out of a specific type of oil. So, it is ok to mix peanut oil with vegetable oil sparingly.

However, we don’t recommend using it for large batches of oil especially when you don’t have any knowledge about the properties and temperature of oils. Also, while mixing peanut oil with other oils, make sure that no one with a peanut allergy is going to eat the final dish.

You can mix frying oils but you need to pay attention to the smoking point of each oil, as we said before it can be different from peanut oil to vegetable oil and so on.

If you find out what the smoking point is for the oil you have and want to mix it with a similar one, go ahead, there should not be any problem, but don’t do it if it is not necessary to mix them.