Looking for mangosteen in the supermarket, and you’re a bit shocked by the price ? Mangosteens can get really pricey, but there’s a reason for that.

Actually, there’s a few reasons and we’ll get to explaining all of them today. 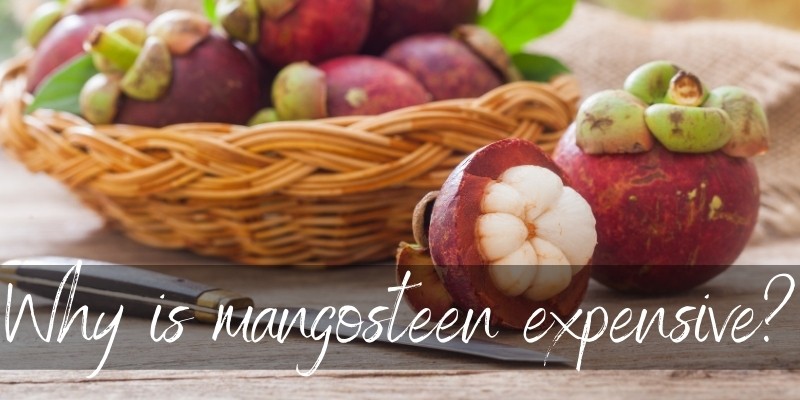 Why is mangosteen expensive?

An important reason mangosteen is so expensive is that it is very hard to grow this fruit’s plant. Mangosteen tree requires the soil to be a bit wet but not too much, and it takes at least 10 years to bear fruits.

There is a lot of risk of much of the shipment getting spoilt in the transit itself. If a refrigerated cargo is used, the cost will go up.

What is the average price for mangosteen?

In the US, a single mangosteen fruit costs $8-$15. You can buy a kg of this fruit for about $2 in Thailand, which is one of the largest mangosteen growing countries. Even if you keep the fruits in the refrigerator, you should use them soon, within a few days.

Even if it is successfully imported, the retailers know the fruit’s life span is not much. Some of the fruits may be spoilt in the shipment and discarded by the retailer.

From harvest to consumption, mangosteen fruit stays good for only a few days. This means this fruit is not a great export-import commodity.

Suppose you are living in a country where it isn’t grown. In that case, you can imagine the difficulty of importing mangosteen through the usual channels of international trade.

The mangosteen fruit can be found in some Asian supermarkets. Still, it must be expensive to cover all the costs to make it available in foreign markets.

Like other fruits, canned and frozen mangosteen can be found, but they do not taste as delicious as fresh mangosteen.

Looking at its high market price, farmers in many countries outside Southeast Asia tried to grow mangosteen, but they haven’t had much success.

Mangosteen is rare and hard to grow

For the mangosteen trees to grow, they require a certain kind of soil and climate to sustain their natural growth. This kind of climate and soil is found only in a few countries in the world, and these countries are Thailand, Malaysia, Indonesia, and the Philippines.

It is possibly one of the toughest fruits to grow, as it requires a range of favorable conditions for its flowers to sprout and bear fruit. The tree itself takes 10-20 years to mature and start bearing fruits. Farmers who grow mangosteen trees believe it’s an art to grow this plant as it requires both time and care. 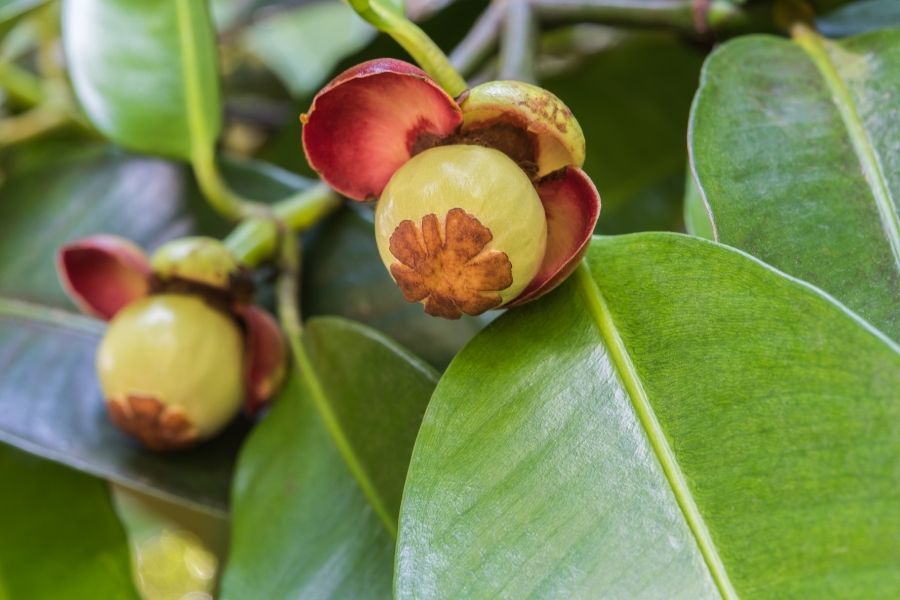 For mangosteen trees to grow properly, their soil should be wet, it should not be soggy.

Rainforests are the places where most mangosteen trees grow. It is because of these peculiarities that mangosteen trees are not grown everywhere in the world. And that’s also an important reason why this fruit is so expensive.

Large scale production isn’t possible outside of Southeast Asia, even in the seemingly climate-appropriate states mentioned above.

When is mangosteen the cheapest ?

Mangosteen is the cheapest when in season, and the summer is the peak season for mangosteen. The fruit can be found at other times as well, especially in Thailand, Malaysia, and Indonesia, where it is primarily grown.

While mangosteen is an expensive fruit, it can be found cheap during the season in these countries.

Thailand is the biggest producer of mangosteen. But it is also grown in significant quantities in some other Southeast Asian like Indonesia, Malaysia, and the Philippines.

Mangosteen trees grow in a climate marked as: hot, wet, and high humidity. The fruit itself matures in summer just before the rainy season begins. In Thailand, the best time to buy mangosteen fruit is from April to July, while in Malaysia, it’s from June to August.

Mangosteen is a rare fruit found in just a couple of countries. Mangosteen fruit has a delicate white flesh with a unique, flavorful taste.

The fruit has a dark, purple rind and its shape is perfectly round. The rind peels away easily but can stain your fingers and clothes if you are not careful.

Its seeds are very small and can be eaten along with the fruit, though they may be hard and bitter.

The biggest issue with mangosteen is its short life span that makes its storage and long-term use difficult. But you can find canned and frozen mangosteen go for it. The canned version of the fruit may have added sugar, so be sure to look at the ingredients.

The fruit is available in juice and powder form as well, thanks to the food processing industry. The fresh fruit can be found at Asian supermarkets during the season.

While buying, look for mangosteen with a dark, smooth outer rind. The rind is inedible and can be removed with your fingers, or a serrated knife.

The main fruit is the white flesh inside the rind. It’s juicy and flavorful when ripe. You can eat the fruit raw, or add it to your salad or smoothie.

The purple mangosteen (or simply mangosteen) is not easily found in the US market even after the import restrictions were lifted more than 10 years ago.

While the extremely fragile nature of the fruit makes it difficult to import in large quantities and store it.

In America, it is considered a superfruit and superfood. In the mangosteen growing countries, the fruit is harvested and brought to the market between April and September.

The exact time differs from country to country, depending on the climate. The export of mangosteen to other countries typically takes place during these months, and the chances of getting this fruit cheap are maximum during mid-harvest time of June and July.

Mangosteen was not allowed for import in the US until 2007, on the grounds that through the fruit exotic insects would find their way into the country. But it seems the ban has increased the appeal of the fruit among the American people.

As a result, mangosteens brought into America are irradiated to kill off any insect eggs.

Mangosteen fruits are very expensive because it’s quite a rare kind fruit that’s found in just a few countries in the world. Another reason is that the ripe fruit has a lifespan of a few days only. And finally, the mangosteen trees take 10-20 years to start bearing fruit.