Maple syrup is a staple of morning pancakes, cold weather, and feeling all cozy and bundled up inside. It costs a pretty penny but luckily there are many brands to choose from, some more affordable than others. The problem is, that those affordable ones are not actual maple syrup.

So we’re left with two options: buy real, expensive maple syrup or buy affordable, not-maple syrup. Why is maple syrup so expensive in the first place ? Clearing this up can help us make an informed decision, instead of simply listening to our pockets. So let’s take a look. 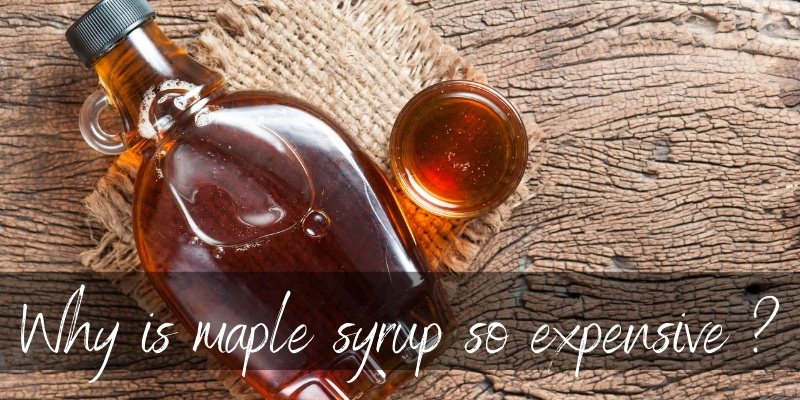 Table Of Content show
1 Why is maple syrup so expensive ?
1.1 1. An insane amount of maple sap goes into a bottle of maple syrup
1.2 2. Processing maple sap is fiddly and time consuming
1.3 3. Maple trees can only be tapped in later winter/early spring
1.4 4. Not all maple trees are good for tapping
1.5 5. Nearly all maple syrup is made in Canada
2 Do not confuse maple syrup with maple flavored syrup

Why is maple syrup so expensive ?

Maple syrup is expensive because it is time and labor intensive, and about 40 liters of maple sap go into a single liter of maple syrup. There is a time constraint on when and how to tap the maple trees, and not all of them are eligible.

So in short, it’s a very limited supply that needs a lot of work to end up on the shelves, with a very high demand each year. This all results in a steep price for a single gallon of maple syrup, even before supermarket markup.

Let’s explore these reasons in more detail. A lot of people take maple syrup for granted, but once you take a look at the production process you may change your mind.

1. An insane amount of maple sap goes into a bottle of maple syrup

Maple syrup is more complicated than many people think. Before researching for this topic, we thought a maple tree was simply tapped, and there you go, maple syrup. But no, what flows form each maple tree is maple sap, which is mostly water. It flows freely (albeit for a limited time) so buckets upon buckets of maple sap can be extracted from a single tree.

Read also: Why Is My Honey Solid ?

Each bucket of maple sap is collected into a sugar shack, there the maple sap is cooked down into maple syrup. That means evaporating a whole lot of water. How much water ? We’re not good with percentages, but the end result is 40 times less than was collected.

So that means that for every 40 buckets of maple sap, you get a single bucket of maple syrup. Suddenly all those trees don’t seem that impressive anymore.

As you now know, maple syrup has to be cooked down into the thick, delicious pancake topping we love. But, since it has some sugar in it, it has a boiling point higher than water. Which it shouldn’t cross too far, otherwise the sugar will crystalize and the syrup will be gritty when cold. 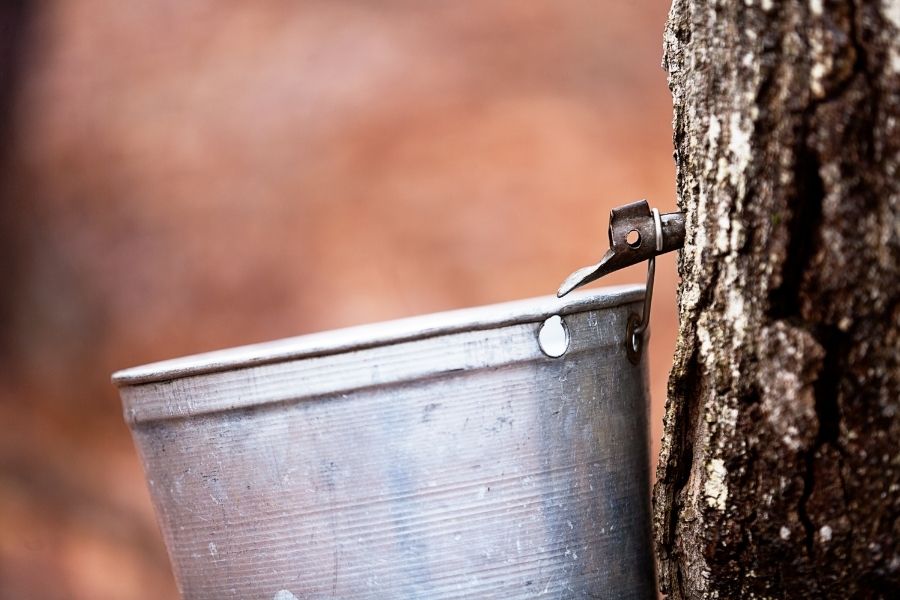 So maple sap has to be gently and uniformly simmered for hours and days on end, until most of the water has evaporated. This is all done in specialized shacks, in large wide pans, and someone has to watch over all of this.

Add to this that once spring kicks in, the maples start to bud, and their sap changes flavor, so timing is key as well.

3. Maple trees can only be tapped in later winter/early spring

Something most people don’t know about maple trees is that their sap is not available year-round. Nope, it freezes in the winter and it needs a specific weather to start thawing. Once thawed, the sap flows freely from the tree, if tapped. And this is exactly when and how tapping is done.

In late winter or very early spring, and it can take a couple of weeks to collect all the sap. It does not always fill a bucket in a day, sometimes it takes several days to get a single bucket filled.

Add to this the rising climate issue, and maple trees are becoming more and more confused as to when to let the sap flow. This makes collecting it an increasingly frustrating issue.

4. Not all maple trees are good for tapping

Maple trees live long lives, but take quite a while to mature. And only fully mature maple trees can make enough sap to be collected, and still keep some for themselves. When is a maple tree mature ? At about 30+ years of age. Yes you read that right.

These are ongoing efforts to plant more maple trees, and research into tapping younger maples, but more information is needed. For now, maple trees  that are older are the only ones good for tapping.

And those trees are never in someone’s backyard, or on a plantation that is easy to get to. No, those big, old maples are usually in forests, off the side of the road. This means that sap collection goes on kind of far from civilization. This means extra costs in transport and guarding the area.

5. Nearly all maple syrup is made in Canada

Maple trees grow in very cold climates, and so far that only means Canada and part of the United States like Vermont, Maine, New York, and so on. There are efforts to naturalize maples in New Zealand, at least enough to get production up and running.

As you now know, maples need time to get the sap flowing, so until more maples are planted in adequate conditions and allowed to mature, Canada and NE America are the sole maple syrup producers and exporters.

If you’re from a country that is neither Canada nor America, your maple syrup is imported and this means a whole lot of extra fees, middlemen, and price markups.

Do not confuse maple syrup with maple flavored syrup

You may be wondering what’s wrong with the affordable versions. One of the most commonly sold ones is Aunt Jemima, and we’ll take a look at the ingredients, which can easily be found online. The very first ingredient is corn syrup, and a few ingredients later you will find natural and artificial flavoring.

This is the case for nearly all faux maple syrups. They have a milder flavor, and can easily be colored to look like the real deal. And they cost way less than actual maple syrup. So, if you really want some maple maple syrup you’ll have to splurge on a real bottle.