So you’ve just brought home that nice jar of honey you’ve been eyeing for a couple of weeks, and everything’s great. You end up eating about half of it, and you store it in the pantry. But after a while, you forget about it and only come back later. Now your honey is solid, opaque, and has little crystals around the edge.

Why is your honey turning solid ? Is it still edible ? Can you reverse the process ? Was this bad honey ? Don’t throw it out ! It’s actually a very normal thing, and easy to reverse. So let’s take a look at what really happened. 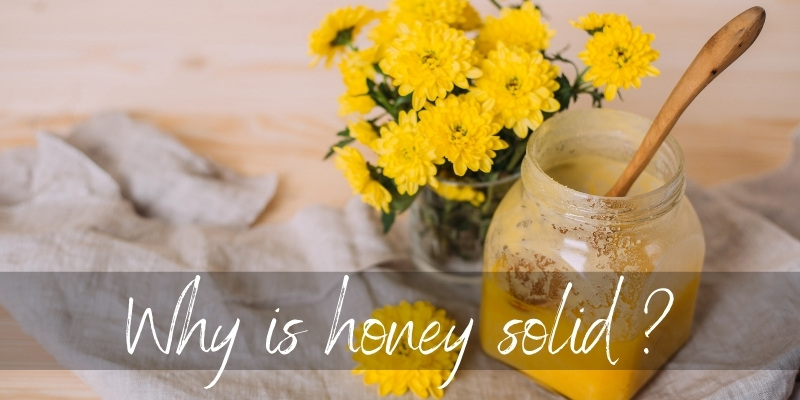 Table Of Content show
1 Why is my honey solid ?
1.1 1. The sweeter the honey, the faster it will crystalize
1.2 2. Some types of honey crystallize faster
1.3 3. Honey stored below room temperature solidifies
1.4 4. Unfiltered honey solidifies much faster
2 Should honey be refrigerated ?
3 Conclusion

Why is my honey solid ?

Honey can turn solid when stored at 13-17 C/55-63 F, leading to tiny crystals forming throughout the jar. They are sugar crystals, and they form much faster if the honey is raw and unfiltered, and even faster in some honey types.

This all means that if your jar of honey has started to crystalize or solidify, you shouldn’t worry. It’s simply a sign of an unadulterated honey, one that is closer to the original state of honey, when it was harvested.

If you’re worried about it being unusable, know that you can still spread it with a butter knife, like jam. It will melt and work the same way as liquid honey once subjected to heat. To return it to its liquid state, fill a bowl with warm water, and place the jar inside the bowl, allowing the honey to warm up. Don’t use hot water ! Simply let it warm up on its own.

Now that your honey’s back to a flowing state, let’s take a closer look at why it crystalized in the first place.

1. The sweeter the honey, the faster it will crystalize

Honey is only as sweet as the nectar it comes from. In the end, the sugars in honey seem much sweeter because this is a supersaturated solution. A whole lot of nectar is used for a teaspoon of honey, and the end result is only 17-18% water content.

What’s even more interesting is how honey is made from two different sugars: glucose and fructose. The bees split the sucrose in the nectar with their very own enzymes, and it’s the ratio of glucose to fructose that dictates how likely a jar of honey is to crystalize.

Read also: Why Is Honey So Sweet ?

Not all nectars are made equally. Some are less sweet than others, and this means some honeys will have a smaller glucose to water ratio. This can make the honey stay liquid for even longer than a few months. On the flipside, honey made from sweeter nectar will end up crystalizing faster, in a matter of weeks after harvesting.

2. Some types of honey crystallize faster

Not all nectars are equal because not all flowers are equal. Bees have no real preference for the flowers they drink from, so their honey is often a mix of whatever flowers are available in the season. Unless the beekeeper moves them to a location with a specific flower type, in which case the honey takes on the smell and taste of those flowers, and the color from the pollen of those flowers.

But some flowers produce nectar which turns into a honey that crystallizes quickly. Those are dandelions, mesquite, most of the Brassica family, and even cotton. On the other hand there’s honey that will stay liquid almost indefinitely, and isn’t as sweet but has a ton of flavor. Examples include the tupelo, jujube, and sage. 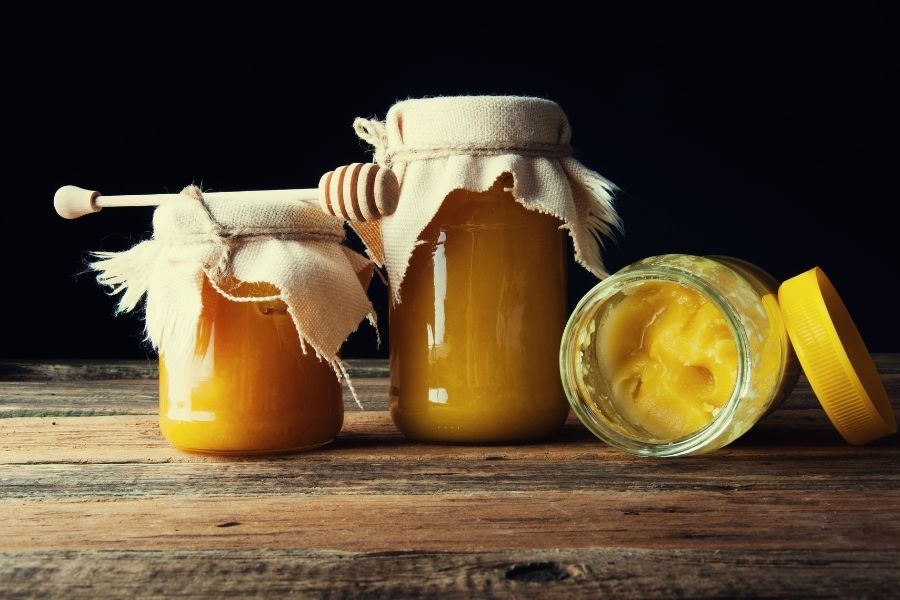 The storage temperature of honey really matters, more than you’d imagine. Normally you’d keep it in the pantry, or on the counter, or somewhere at room temperature. And the thing is, that’s perfectly fine. But honey is a tricky little thing, and and does not like being mildly cold.

Anytime honey is kept at temperatures between 13 and 17 C/55 and 63 F, it will start to solidify. So if you leave town for a week, and your heater breaks down, and the house temperature goes below normal (but not freezing), your honey will turn solid.

This also happens when honey is stored in warehouses, in the back of supermarkets. Often you’ll find freshly stocked honey shelves with a whole lot of opaque, solid honey jars. Some fully solid, some with a layer of thinner honey on top, and some just starting to crystalize. This is most common in the colder season when the warehouses get colder than usual.

Thankfully this process is easy to reverse, so go ahead and buy that solidified jar of honey if that’s the one you were looking for. When you bring it home, put it in a pot of bowl of warm water (around 40 C/104 F) and let it sit there for half an hour. The honey will melt back to its original state.

Keep in mind that once honey has started to solidify, and you melt it, it will solidify again in a few weeks. This process can be repeated as many times as needed.

An important point about honey is whether it’s filtered or not. Well, nearly all commercial honey is both filtered and pasteurized. This means any debris such as bee parts, extra pollen, and bee wax are filtered through a mesh, to provide a clear, golden honey.

It is then heated to stave off crystallization and fermentation. Natural, raw honey contains small amounts of yeast, derived from the nectar used to make honey. If kept at a stable temperature and with an airtight seal (as bees keep it in the hive) the honey will not ferment.

But once it’s harvested, it becomes unstable and can ferment in a few weeks or months. So, it’s pasteurized to keep it stable. Filtering it simply makes the final product that much smoother.

Should honey be refrigerated ?

Hone is safe both on the counter and in the fridge. In the fridge it will actually remain liquid but simply flow at a slower rate. This can be very useful if you’re frustrated with how easily honey can get all over the place.

If you’re wondering why honey doesn’t solidify when kept at very cold temperatures, it’s because it’s a supercooled food item. This simply means that when it’s close to its freezing point, it will not crystallize because there are no seed crystals to start with. This is because liquid sugar does not freeze at low temperatures, but simply becomes thick.

And that’s pretty much it about solid honey. Don’t throw out that jar if it’s solid already, simply keep it in warm water and it should be fine. Or spread it on some toast as-is, and it’s much easier to handle than dripping honey.

Honey sometimes gets solid and it’s quite annoying but that doesn’t mean the honey has gone bad, you can very easily turn it back to liquid as I said in this article. I hope you haven’t thrown away your honey and you will fix it this way.