Nutmeg is a more obscure spice, mainly because it’s not as sweet as other spices, such as cinnamon. It has its own delicious aroma, a pungent, spicy flavor with a vaguely sweet aftertaste. It’s commonly found in fall and winter treats, though you can easily find it in some savory dishes as well.

It seems the world has grown up with the impression that nutmeg is expensive. In truth, it is expensive, because all spices are expensive in their own way. But is nutmeg really more expensive than other spices ? Or does this common belief a hangover from days past ? Let’s a explore this. 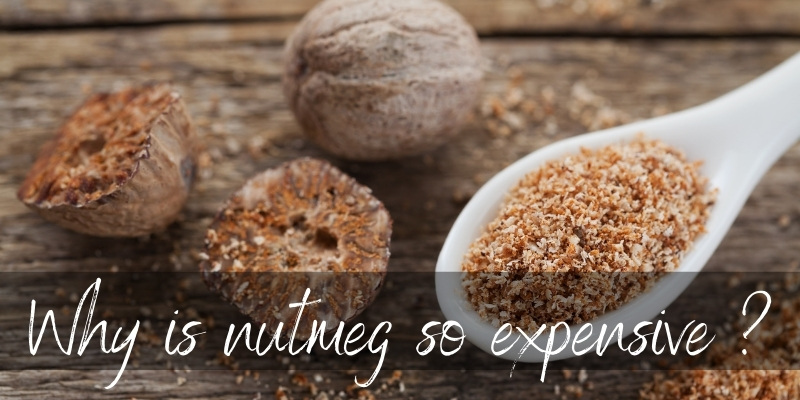 Table Of Content show
1 Why is nutmeg so expensive ?
1.1 Nutmeg used to be one of the most expensive spices
2 How nutmeg is made
3 Whole vs ground nutmeg
4 Caution when using nutmeg

Why is nutmeg so expensive ?

Nutmeg is expensive due to its production process and low yield per tree. However it is not the most expensive spice out there, clocking in at about $2.81 per ounce, whole. Whole cinnamon is around $3 per ounce, and whole cloves are $7.36 per ounce !

Nutmeg simply seems more expensive because it comes in a small form – a seed barely an inch long and half an inch across. A little nutmeg goes a long way, so a single seed can last you a whole year, depending on how often you cook with it.

The nutmeg seed is not the most common spice, and when you compare it to cinnamon or cloves, it’s far less known. So where does the ‘expensive’ part come from ?

Nutmeg used to be one of the most expensive spices

Originally nutmeg was from the Banda islands, all the way in eastern Indonesia. Back then, the spice trade was very competitive and cut-throat. Those who controlled the spice routes had a premium on all spices. So, prices were hiked incredibly high, for reasons such as:

Various countries and empires waged war to be the sole nutmeg distributors. In all of this, the Banda islands’ locals suffered the most casualties. And all the way until the late 19th century, the Banda Islands were the only, and we do mean only, place where nutmeg could be found.

Read also: Why Is Cinnamon Spicy ?

Once the British took control of the Banda islands, they brought nutmeg trees to other colonies in order to have easier access, and to prevent the islands from being the sole producers.

So why did people fall over themselves to get nutmeg ? It was believed to have incredible health benefits, and it was considered a potent abortion inducer. It also has a great flavor and medieval food was pretty bland, to put it mildly. Ingredients could easily go bad and they weren’t as refined as they are today. So spices were often used to mask and enhance a dish.

Of course, not everyone afforded spices, and as a result is was mostly nobles and high society who has any sort of spice lying around. And then, as today, the masses would try to emulate the rich and famous, thus leading to a bigger nutmeg demand.

How nutmeg is made

Nutmegs are a bit underwhelming in their production, in that they’re simply the nut of the fruit of an Indonesian evergreen tree, the Myristica fragrans. The nut is surrounded by a fleshy red membrane, and looks very alien when fresh, with a nearly black nut covered in bright red fleshy membrane. 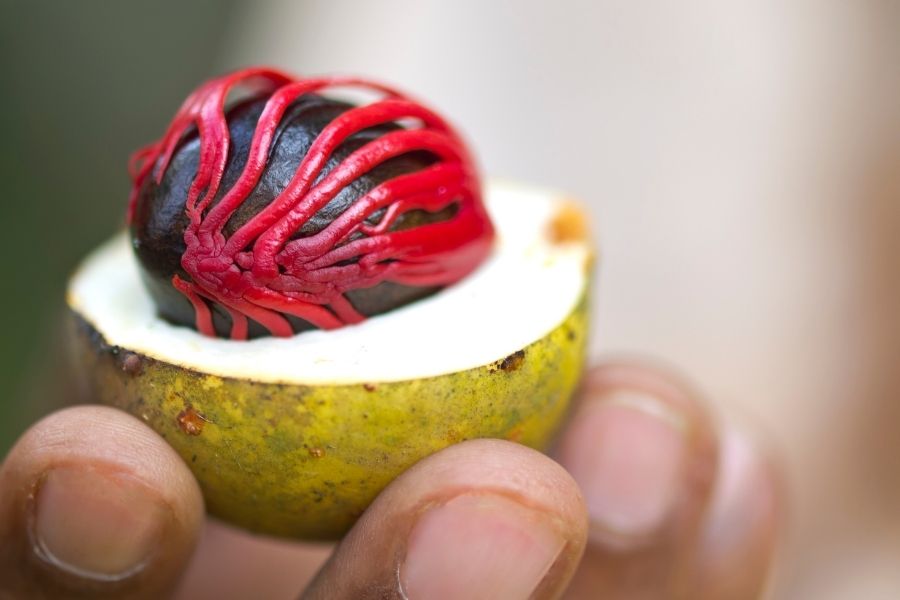 The nutmeg is left to dry, in the sun, while still in its outer shell. This takes about 6-8 weeks. Then the red membrane is peeled, and that is another spice, called mace (dried and ground).

Once the nutmeg is dried and peeled, it’s good to use as-is. Nutmeg is grated as needed, and if properly stored it should last you indefinitely.

Whole nutmeg is preferable to pre-ground nutmeg, simply because its aroma is more potent. You can grind or grate your own nutmeg at home, and this way get the freshest aroma possible.

Another reason whole nutmeg is better is because you have a much lower chance of buying a fake or bulked up spice. Pre-ground nutmeg may be bulked with cheaper ingredients and result in an impure product.

And finally, whole nutmeg can last you several years if stored properly. Pre-ground nutmeg is going to lose its aroma within a few weeks, as it’s very sensitive to air exposure, just like any other spice.

Nutmeg has been known to produce psychoactive reactions when ingested in very large amounts. Do not taker this lightly, because high amounts of nutmeg are truly toxic and may prove fatal.

If you are pregnant you should also avoid nutmeg since it can induce abortions and endanger the fetus. It’s currently unclear if any small amount of nutmeg will do this, or if you need a large amount to trigger any response from your body. Still, better safe than sorry.

Despite all this, you don’t need to take extra precautions when adding nutmeg to your food. The amount you need to use to flavor something is incredibly small, because a little nutmeg goes a long way.