Cinnamon are two very common spices, and something you’ll often see on the ingredient list of many autumn and winter desserts, even savory dishes. So what are these two spices, and how are they different from one another ? Most people know about cinnamon, or can identify its flavor. But a full comparison with nutmeg ? Here’s where we come in.

Cinnamon vs nutmeg is the discussion today, including what each spice is, what it looks like, their respective notes, and how they’re used. So let’s take a look. 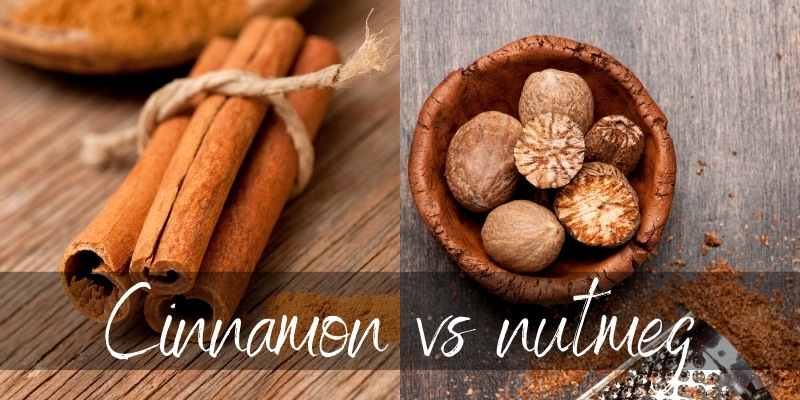 Table Of Content show
1 Cinnamon vs nutmeg
1.1 What is cinnamon ?
1.2 What is nutmeg ?
1.3 Cinnamon has a warmer flavor
1.4 Nutmeg is more expensive, harder to find
1.5 Cinnamon works better for dessert, nutmeg for savory dishes
2 Which is stronger, cinnamon or nutmeg ?
3 Can you substitute nutmeg for cinnamon ?

Cinnamon is the bark of the cinnamon tree, while nutmeg is the seed of an Indonesian evergreen tree. Where cinnamon is sweet, warm and spicy nutmeg is more subtle, pungent, with a vaguely sweet aftertaste. When used together cinnamon easily overshadows nutmeg.

The way each spice is used is also difference, with cinnamon commonly used in sweet dishes, while nutmeg is usually in savory dishes. Nutmeg complements potatoes and dairy very well. That being said, they can easily be used together in all kinds of dishes. Now let’s take a look at what each spice is, so we can better understand them and their differences.

Cinnamon is the spice made form the bark of the cinnamon tree. It comes in several varieties, but the most common are Chinese (or cassia) and Ceylon (Sri Lanka). The Chinese cinnamon is stronger in flavor because it has more cinnamaldehyde, which makes it spicier. It’s got a more robust flavor, while the Ceylon cinnamon is more delicate, and a bit sweeter.

You can tell the two apart only when they’re in stick form. The Ceylon cinnamon is fairly thin and papery, while Chinese cinnamon is thicker and often cut in longer pieces.

Nutmeg is the seed of an evergreen tree that is native to Indonesia. It’s a dried seed, and it’s meant to be grated onto or into foods, just like cinnamon is ground. A nutmeg seed looks like a cross between a walnut and an almond, and has a vaguely sweet yet pungent smell.

Most of the time you will find nutmeg in pre-ground form in very well sealed spice packets. There are also whole nutmeg for sale, but they are rare. Alright, now let’s compare the main points between cinnamon and nutmeg. 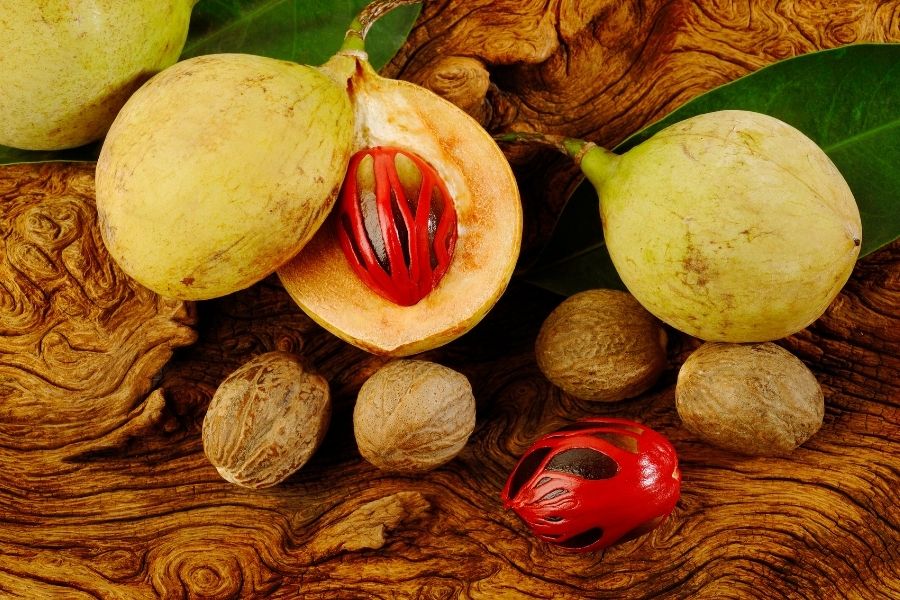 Cinnamon has a warmer flavor

When it comes to flavor, cinnamon is a much warmer spice than nutmeg. It’s warmer and sweeter, and it can bring actual heat in that it’s spicy if used in a large amount. It’s a woody, deep kind of flavor, and definitely something you can easily recognize once you get a whiff of.

Nutmeg has a milder flavor, with a pungent aroma and a sweet aftertaste. It’s not as easy to discern among other spices, except it pales in comparison to cinnamon, especially in terms of sweetness.

This may sound odd, but one way to think of nutmeg’s pungency is how milk turns from sweet to slightly sour when it starts to curdle but it’s not completely off. Nutmeg should be used sparingly if you’re sensitive to sour or pungent flavors.

Because nutmeg has a smaller yield, it’s more expensive than cinnamon. A single Myristica fragrans tree can only yield so much, and it takes at least 7 years to form its first seeds, and only reaches full production potential after 20 years.

Cinnamon on the other hand offers a lot to work with, so a comparatively larger yield. This means it will be easier to find in markets, so you will have an easier time using it in your recipes.

When shopping for cinnamon, try and get the stick kind. It’s better to grind your own and have it fresh, than to buy pre-ground and have it lose most of its aroma within a few weeks after opening the packets.

Just by looking at the flavors, cinnamon tends to go better with sweet dishes, like desserts, pies, puddings, rice pudding, cookies, and so on.

Nutmeg tends to work better for hearty dishes, to cut through all that dense flavor. So for example scalloped potatoes, venison, turkey, fish all benefit from a bit of nutmeg, just don’t overdo it.

That being said, you can easily mix the two and find nutmeg in a sweet dish, like a pumpkin pie, and cinnamon in a savory dish like a braised duck breast sauce.

Which is stronger, cinnamon or nutmeg ?

Cinnamon is a stronger flavor than nutmeg, and the first one you will notice when using them both. It hits you first with its sweet, spicy aroma and then you feel the pungency of the nutmeg towards the end. You will definitely notice the lack of nutmeg if you decide not to use it, as it rounds out cinnamon’s flavor.

If you want nutmeg to stand out more, don’t add more of it, it can be overwhelming. Rather use less cinnamon to let the nutmeg shine through better.

Can you substitute nutmeg for cinnamon ?

No, nutmeg and cinnamon cannot be substitutes for one another. They taste very different and bring out different nots in your food. Where cinnamon brings the sweet and spicy, nutmeg brings pungency and barely a hint of sweetness. Rather it’s more like cardamom, in that its has its own flavor and does not taste nowhere near as sweet as cinnamon.

You can sue cinnamon and nutmeg together and they work great, but remember to use a good ratio. Something like 1:4 nutmeg to cinnamon is more than enough. If you use more nutmeg the pungency may become too strong. Then again, each person has their own preferences, so try different ratios and see which works best for you.

That’s pretty much it for nutmeg vs cinnamon. They’re both great in their own way, but cinnamon seems to be everyone’s favorite. Maybe it’s because it’s sweeter, or maybe it’s because we’ve been conditioned to like it better, after a lifetime of having it in many desserts. Still, one thing is undeniable: both cinnamon and nutmeg just scream rusty leaves and cool winds. Get your scarves ready !