Salmon is famous for its beautiful hues of orange, pink, red, and coral. Salmon-pink, or simply salmon is a hue on its own ! It’s one of those beautiful fish meats that simply stand out in a crowd and look very appealing, right up there with tuna red.

But why is salmon pink ? Or is it even pink, or is it orange ? And why is wild salmon so much deeper colored than farmed salmon ? And what’s this about dyed salmon meat, when did that happen ? There’s a perfectly good explanation for all of these questions, and more. Let’s take a look. 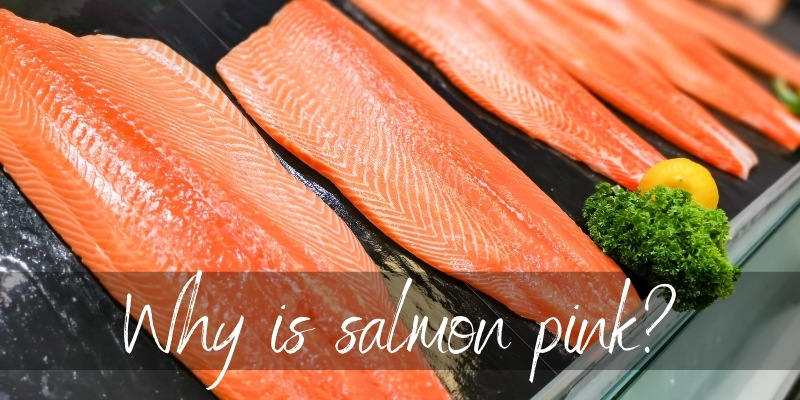 Table Of Content show
1 Why is salmon pink ?
1.1 Why is some salmon pink and some red ?
1.2 Farmed salmon is naturally grey-white
1.3 Why do they dye salmon pink ?
2 Which salmon is best ?
3 What color should salmon be when cooked ?
4 Should you remove the skin from salmon ?
5 Can you eat raw salmon ?
6 What is the grey stuff in salmon ?

Why is salmon pink ?

Salmon is pink because of its diet. In the wild salmon eats lots of crustaceans such as shrimp and krill, which produce a lot of orange-red pigment from the carotenoid family. It’s the same pigment that makes shrimp turn orange-pink when they cook, and a lobster red.

Because shrimp and krill are a salmon’s main feed, their natural pigment is then processed by salmon’s digestive system and ti stains their flesh. So, you end up with a orange-pink salmon.

Why is some salmon pink and some red ?

Depending on the amount of shrimp and krill, some salmon may simply be more or less brightly colored inside. As a general rule, wild salmon have the deepest colored meat, while farmed salmon have paler, more delicate hues.

Why do they dye salmon pink ?

So to combat this problem, and to bring on the color people know a salmon should be, their feed is often laced with the carotenoid pigment that is found in krill and shrimp. It’s also fortified with fish meal, which is dried and ground fish scraps.

This way, the salmon gets an orange hue, but it can never be as bright or as strong as a wild salmon’s color. It’s simply not possible, unless the salmon is fed large amounts of shrimp and krill, like in the wild.

Read also: Why Is Salmon So Expensive ?

So the ‘dyed’ salmon meat is not actually dyed. No one’s going around painting meat. Their food has the pigment added, the same way Japanese chickens are fed a mix that also contains sweet paprika. to get orange egg yolks.

Which salmon is best ?

You may be wondering which salmon is best, in this case. Well the best salmon is always going to be wild salmon. It’s better fed, has had plenty of exercise, and has a much lower chance of carrying parasites of being sick. 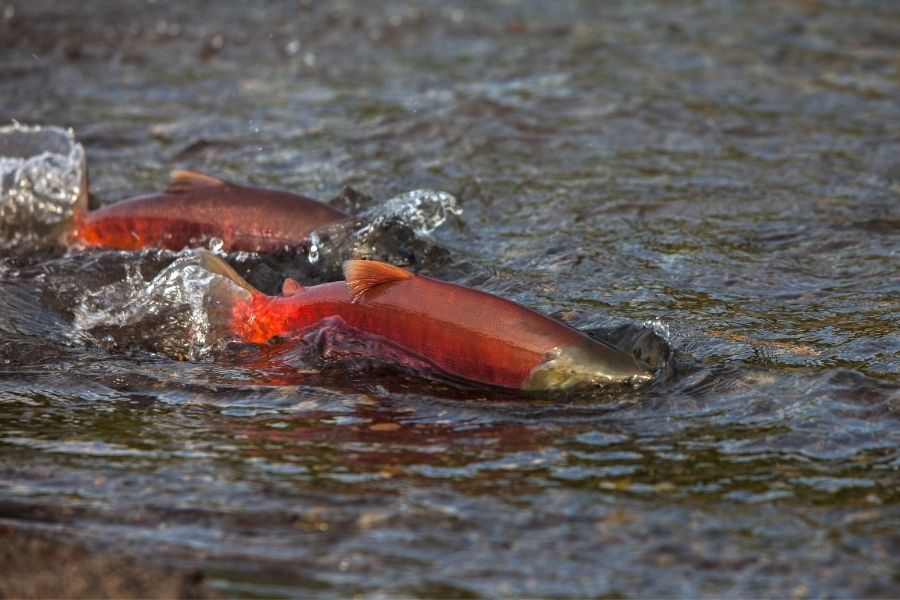 In terms of variety, the best salmon is Chinook (or king). This fish is native to the Northern Pacific Ocean, and can be found along the coast of North America, Siberia, and northern Japan. However you can easily find it now in Lake Michigan and New Zealand as well.

This fish has the highest price and the best meat, so if you can afford it be sure to get it.

What color should salmon be when cooked ?

When your salmon is done, it should still be somewhat orange-pink, and not completely white. It’s perfectly fine to be pink in the middle, just like tuna and beef.

Salmon needs a light sear on both sides, it does not needs to be cooked for long. If the meat is dry and flaky, it’s overcooked. It will separate on its own if you pick at it lightly with a fork, separating each section. 3 minutes on each side on high heat are enough.

Should you remove the skin from salmon ?

Salmon skin is perfectly edible, just remember to remove any and all scales. You will need a kitchen knife and a sink that can be plugged. Keep in mind that all those scales can and will clog your sink, so don’t do this under running water. Hold the fish firmly and direct the knife, at a angle, against the grain.

The scales should come loose very easily, since the knife will turn them over and detach them from the skin.

If you want to remove the skin, it’s best to use a very thin and sharp knife. Use short strokes and be very patient. You’re likely to nick the flesh as well, don’t be too upset over it.

Can you eat raw salmon ?

You may eat raw salmon as long as it’s wild salmon. Wild salmon has the lowest chance of carrying parasites or diseases. You can be sure the salmon is of high quality if you’re at a reputable sushi bar, because they have very strict standards.

If you’re using standard supermarket salmon, so not eat it raw. Even if the fillet is cooked but a bit pink in the middle, it’s still better than eating raw salmon that is farmed. Again, the threat of parasites like tapeworm is real.

This threat is eliminated through a deep freeze, or cooking the salmon. However, frozen salmon doesn’t have much of a texture or flavor when thawed. So you’re better off cooking it anyway.

What is the grey stuff in salmon ?

The grey substance around salmon meat is the fatty tissue of the fish. It can be easily removed and discarded with a sharp knife. There’s nothing wrong with the fish itself, that’s just what it looks like.

In terms of taste or nutritional value, you don’t lose or gain much through that fatty tissue. It, too, has some omega 3. 6. and 9, though it’s not more than what you’d find in the flesh or the skin, or the bones. Most people prefer to remove the grey fatty tissue, simply because it doesn’t look good on the fish when cooked.