Lox is one of those cuts of meat that sound very interesting and may not be immediately obvious when you first hear about them. But for those with Germanic, Nordic, or Ashkenazi ancestry, the word may be very familiar.

In fact, this is a type of salmon meat ! It’s commonly served on sandwiches, bagels, cheese and meat platters, and is a mainstay in smorgasbords. But how is it any different from gravlax ? If you’re not sure what that is, then this post is for you because we’re going to take a close look at these salmon meats. 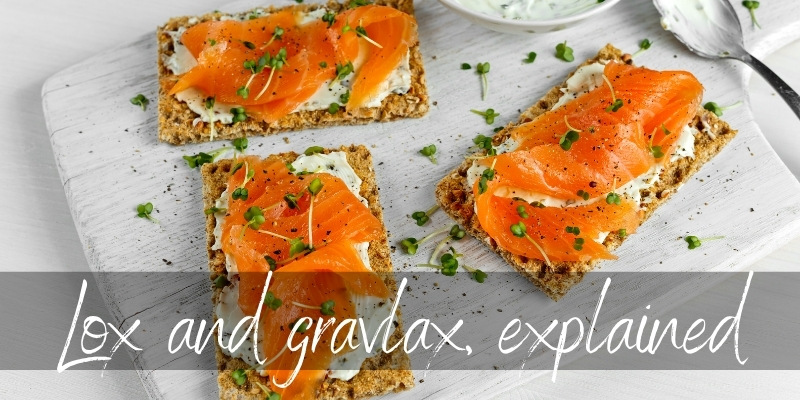 Table Of Content show
1 Lox vs Gravlax
1.1 Lox is a simple, brined salmon
1.2 Gravlax is salmon brined with spices and herbs
1.3 What is Nova salmon ?
2 Is lox raw salmon ?
3 Why is lox so expensive ?

Both lox and gravlax are brined salmon meat, usually taken from the belly of the fish. That is the part with the fattest, and it’s always brined. Lox stops at bringing, while gravlax takes it a step further by adding spices and herbs to enhance flavor.

Both are a great way of preserving salmon meat for months on end, especially in periods when salmon isn’t easily available. Or in places where salmon and fish, in general, are the main meat on the table.

Both lox and gravlax are fairly common today, even if storing meat for several months isn’t as difficult as it used to be. They’re both delicious and gravlax is especially traditional. So people have become very fond of them. Now let’s take a closer look at both of them.

Lox is a simple, brined salmon

Lox is simply brined salmon belly, at least in its original form. Nowadays the word lox is used for any part of the salmon that is brined. You can find belly meat, and it will be specifically labeled as lox belly.

Read also: Why Is Salmon So Expensive ?

The very word lox has quite a bit of history to it. Originally, it came from the Germanic word lachs, which was then adopted into the Yiddish language as laks. The English lox is a form of these words. So the very name is pretty simple, meaning simply salmon.

The way to make lox is simple as well, since it follows a very similar process as cured ham or corned beef. The salmon is salted and stored for several days to cure and develop its flavor. Usually only salt is added to lox, since it’s a very simple meat. It’s served with cream cheese, cucumbers, radishes, or on its own.

Lox is not a smoked piece of salmon, despite some smoked salmon being called lox.

Gravlax is salmon brined with spices and herbs

Gravlax is a Nordic version of lox, with a twist. It was the main way of storing salmon, by burying it in salt and digging a hole in the ground, and keeping it there to ferment. Gravlax is no longer fermented, but the traditional spices are still added: dill, salt, and sugar. Other spices may include coriander, citrus juice, juniper berries, to bring a different flavor and draw out even more moisture. 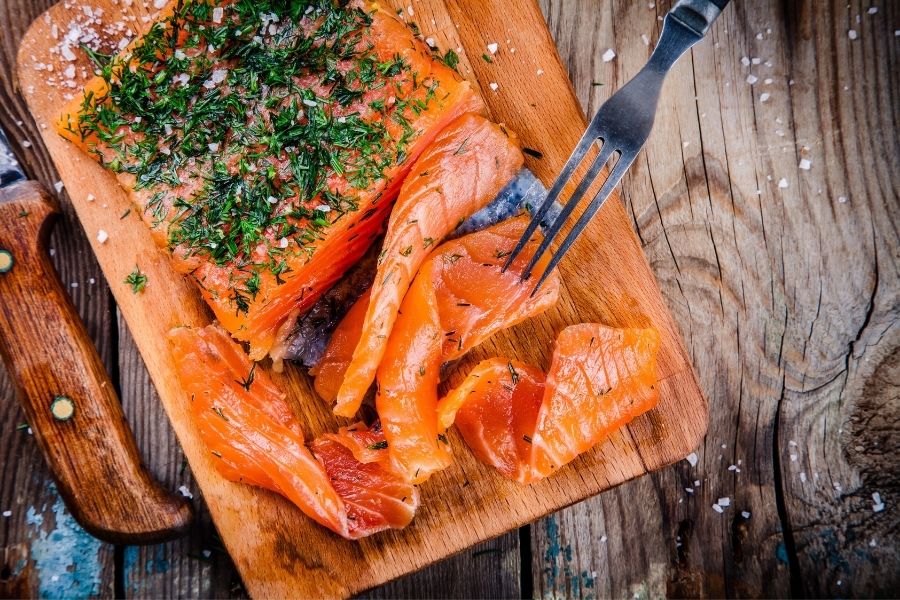 The very name gravlax is derived from the old way of making it. Grav, meaning to dig a hole, and laks, salmon, since this was a fermented fish kept in a hole in the sand. In the end, it’s a version of lax with a slightly different flavor.

An important difference in the way gravlax is served, as opposed to lax, is the sauce that accompanies it. Normally, you will find a sauce made of mustard and dill (yes, more dill) and it may come with a side of boiled potatoes or bread.

Like lax, gravlax is only brined, it is not smoked.

What is Nova salmon ?

Nova salmon is also a type of salmon meat, only it is both brined and smoked. Its name is derived from the fact that, when this dish first came around, the typical fishing place for salmon was in Nova Scotia and they had a specific way of treating the meat.

Modern Nova lox is still brined in less salt (so lower in sodium), still smoked, but the salmon may be from anywhere or even from a salmon farm. It’s very common in New York, though you can easily find it for sale all across America.

It starts out that way, but the end product is cured and does not really resemble raw meat. In our opinion it can no longer be classes as raw meat, after it’s been brined and cured like that. The same applies for gravlax and Nova lox.

Read Also: Why Is Salmon Pink ?

Why is lox so expensive ?

Lox is expensive because it takes time to prepare, and salmon is one of the most expensive fish types you’ll find on the market, just like tuna. There’s also the fact that as the meat cured, it loses moisture, so it loses part of its weight.

Not only that, but when salmon is smoked, the entire fish is used – heads, tails, fins, everything. Those are not used for fish meal, as they’re salted and cannot be used to feed animals due to the high sodium content. So they’re simply discarded.

In short, it’s a combination of working with a meat that is already expensive to begin with, and using a process that reduces its weight significantly.

Lox, gravlax, and even Nova lox are all worth the price, as they’re a sort of delicacy and you don’t have them everyday. We hope you do give at least one of them a try, even if it’s in a salad, not on a bagel.