Vanilla is probably one of the most common flavors all over the world, yet suffers from severe price hikes. For a flavor that is everywhere, you’d expect it to be cheaper and the price to be somewhat constant.

But why is vanilla so expensive ? What drives the price up, and how does it grow ? Does vanilla extract factor into this ? This is what we’re going to discuss today, since vanilla is something many people cook, bake, and work with every day. Let’s see what drives these prices. 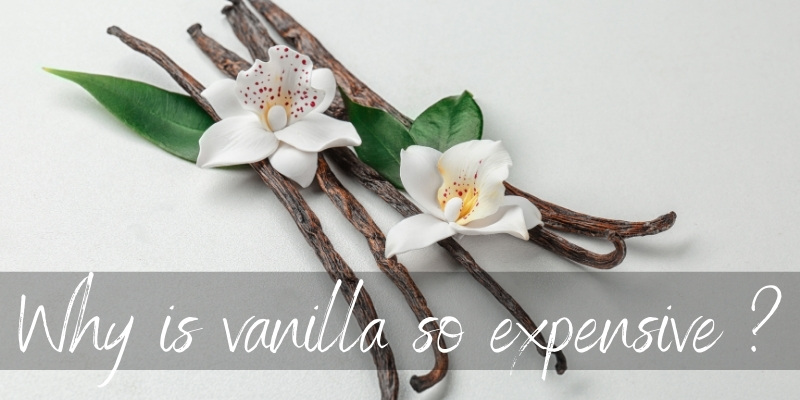 Why is vanilla so expensive ?

Vanilla pods are expensive because they’re very difficult to obtain, the crops are regularly affected by bad weather, and they require 100% manual labor, day in and day out.

Vanilla is the second most expensive spice on the planet, right after saffron. The work that goes into producing a single vanilla pod takes an entire day, and curing the pods takes about 9 months with lots of attention to detail.

Cartels often hijack the production of vanilla, sometimes holding back and hiking the prices. About 80% of the world’s vanilla is produced on the island of Madagascar, off the coast of Africa. The rest comes from Indonesia, Mexico, Papua New Guinea, and China.

Now let’s explain why vanilla beans and pods are so expensive in more detail, because such an important crop deserves a proper explanation.

Most people don’t think about where their vanilla comes from, and in a way that’s fair. You see it on the shelf, a black pod with a high price tag. The you look at the vanilla extract and see varying prices. So what’s going on ? Let’s begin with how vanilla starts out.

Vanilla pods are the fruit of the vanilla orchid. These beautiful flowers are incredibly finicky, and they only produce a single pod per flower. If left on their own, they’d produce just a few flowers and that’s it. Well, workers on vanilla farms have to manually arrange the vanilla vines so they don’t grow too tall, which forces them to produce more flowers. This is no easy feat.

And vanilla orchids are grown in an area that has the perfect climate, which is hot and humid. Sometimes this works against the crops, when a cyclone hits and simply destroys everything in its path, vanilla included. There were such instances in the late 1970s, in 2000, and in 2017 another cyclone shot up prices.

When a cyclone hits and ravages the vanilla crops, the prices can stay high for several years, simply because that’s where the majority of vanilla pods come from.

We’re established that vanilla orchids are difficult and have to be checked daily. Now let’s talk about who does all that checking. Workers go in every day and check the vanilla flowers, to see if any are open, If they are, they are hand-pollinated, the flower closes within a few hours, and starts producing its fruit, the pod.

Unfortunately these orchids cannot self-pollinate, despite having both male and female organs on the same flower. Humans have to do this, by hand. This can only be done when the flowers open up, which is only 24 hours, so this inspection must be done daily.

Once the pods grow large enough, they are picked and this is where the fun begins. 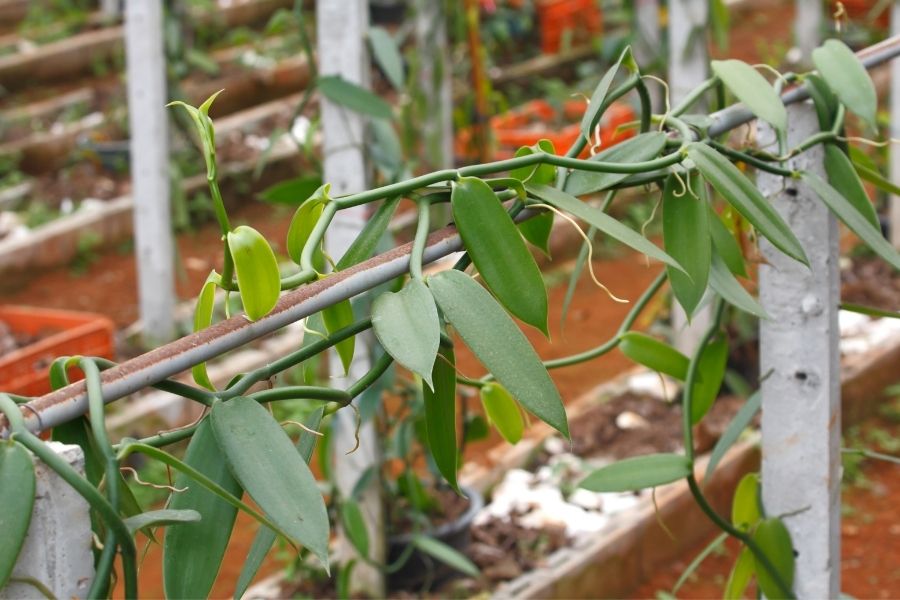 Vanilla pods are not good to use straight off the orchid. Like cocoa pods, they need time, and must be processed. For vanilla pods this means 9 months of careful curing under the sun, so they dry at a specific rate and develop their flavor.

It’s the curing of vanilla pods that gives them their signature flavor, and it’s where their quality stems from. There are four steps to curing a vanilla pod, and all of them must be done with the utmost care.

First, the pod need to be stopped from growing and dunked in hot water, flash-basked, cut, or frozen. This process stops the pod from growing any further and begins the enzymatic reactions that give vanilla its aroma.

Then, the fruits must sweat, so they are bound together tightly, and wrapped in something to keep them warm. The fruits end up sweating, and this goes on for a little over a week. This is them losing their moisture without completely drying out (before they achieve their aroma)

The third step is drying, because the vanilla pods now have their distinctive aroma but it must intensify. So, the pods are left to dry in the sun for several weeks. They lose about 30% of their weight in water. As this method relies on the hot sun and lasts for several weeks, a lot of care is taken. The pods are constantly checked, shaded when needed.

And finally the pods are then stored in boxes for half a year to develop their aroma further, after they’ve been dried and it has intensified.

All of this is done by hand, plus pollination. A lot of work goes into those vanilla pods, so make sure you use up all of the pods if you ever buy one.

Why is Mexican vanilla so cheap ?

So the cheap price you’re seeing is not for actual vanilla pods, it’s for Mexican-style vanilla extract, and the main reason it’s so cheap is because it often contains a cheaper compound than vanillin, called coumarin.

Vanillin is the compound naturally found in vanilla pods. A dried vanilla pod has about 2.5% vanillin in total weight. When you buy vanilla extract, it’s the vanillin that is extracted through alcohol. However, nearly all affordable vanilla extract use wood-extracted vanillin, which is still sweet but different from true vanillin.

So there you have it. Vanilla is an expensive spice, but the amount of work that goes into it is incredible. Vanilla pods are only as good as they are cured, so excellent manual labor is well worth the extra penny.