Buttercream is possibly the most common way to fill and frost a cake, and it can take on so many flavors. Then  there’s cream cheese frosting, with a tangy and rich flavor that doesn’t lend itself to just everything, but where it does it’s heavenly.

So how do you choose between buttercream and cream cheese frosting ? Which do you use on your next cake ? Can you use both ? And what’s this about both of them having butter ? 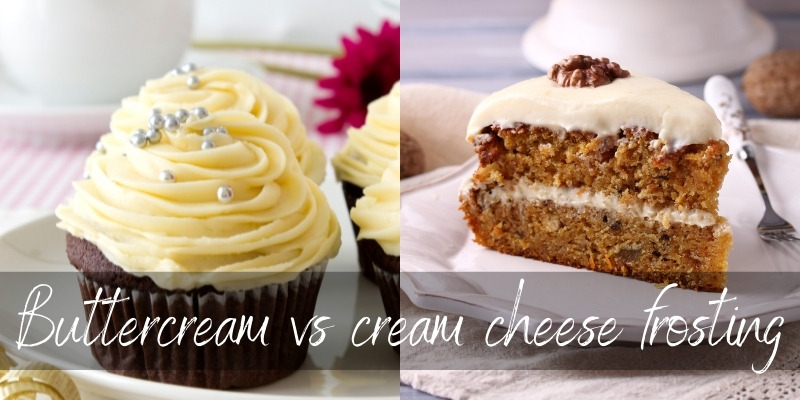 Buttercream is lighter and smoother than cream cheese frosting, and thus lends itself better to cake decorating and frosting. It’s rich and creamy in flavor, while cream cheese is rich and tangy. They both take on flavor very well and pair great with most cakes.

Cream cheese frosting tends to be heavier and less smooth than buttercream, which makes for a more difficult frosting. It’s better suited for filling a cake, though it can be used in any way you like.

Not let’s take a closer look at what each of these cream is, because they’re more than what they sound like.

Buttercream is a type of filling, and it can be easily used as a frosting. It relies on creaming room-temp butter with powdered sugar, and may include other ingredients such as meringue, vanilla extract, heavy cream, milk, and so on. But the base is always, always butter and powdered sugar.

Read also: Does Cheesecake Have Cheese ?

It’s supposed to be a fluffy, creamy texture and it freezes very well. It sits on the cake however you want it to sit, and it will hold its shape beautifully if not exposed to heat.

What is cream cheese frosting ?

Cream cheese frosting is made of blocks of cream cheese that have been creamed with powdered sugar. It also has room-temp butter in it, to make it smoother, and it may also contain other ingredients like mascarpone, heavy cream, flavorings, and food coloring.

The end result is a cream that is a little grainier than buttercream, since this is a cream cheese base. But the main difference is in the taste, which is very rich, thick, and tangy. Cream cheese has a just a bit of salt added, and this pairs very well with many flavors.

Now let’s compare these two creams, see which would work better for your particular case. We’re mostly talking about frosting a cake here, but you may also apply this to fill a cake. 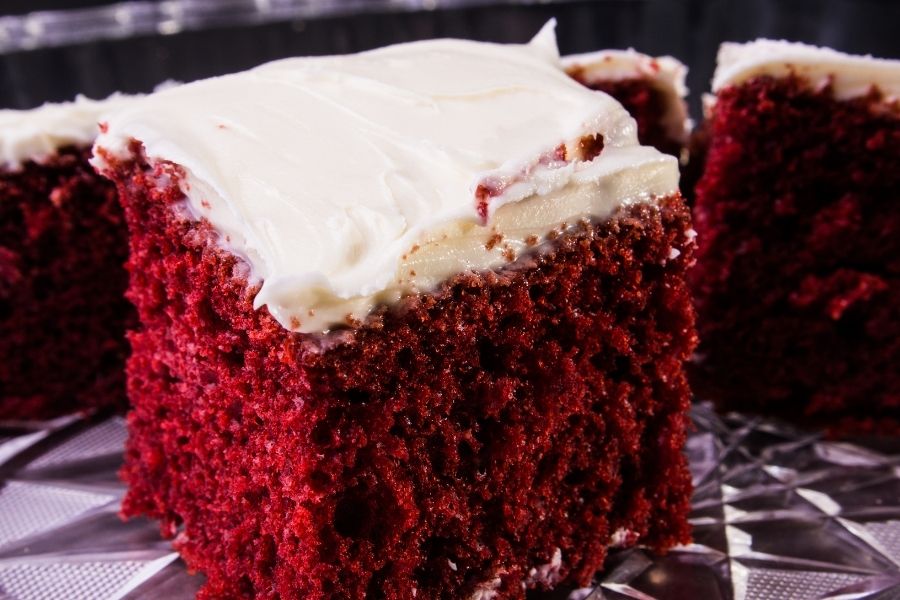 Buttercream is rich and smooth

An important point about buttercream is its texture. This is a cream, filling, frosting, icing that has to be unobtrusive, carry flavor, provide a wonderful mouthfeel, and have you asking for more. Because it’s made almost entirely of butter, it’s very smooth, and you can rarely get it grainy (depending on the sugar and how you make it).

Still, buttercream is pretty much everyone’s favorite because it is so delicious and smooth, and it has a high amount of milkfat. This allows it to carry a lot of weight and round out your cake flavor.

By comparison, cream cheese frosting has a slightly grainy feel to it, or it’s rather not as perfectly smooth as butter is. After all, cream cheese is a type of cheese, even if it’s a soft cheese. This means there are cheese curds in it, and they have their own texture.

This cream is often blended with some butter to make it smoother, but in cases where it’s not, it may end up a little grainy. Some like it. some don’t mind it, some hate it.

Because cream cheese has to come from mildly tangy and cheesy, it needs more sugar than buttercream does. So, it can end up too sweet for some people, especially if you’re aiming to cut down on the tanginess.

By comparison buttercream can be less sweet, since it doesn’t need as much sugar to become sweet. Both are very sweet in their own way, it’s just that the cream cheese frosting has some compensating to do.

Aside from this, its tangy note doesn’t lend itself to just any cake flavor. Buttercream is very neutral and it can easily carry any flavor you throw at it.

Buttercream is easier and more reliable for decoration

If cake frosting and decoration are the main issues, then buttercream is your friend. It will stick to the cake, freeze well, harden nicely, and just plain be a pleasure to work with. Remember that smooth consistency ? This means piped flowers with a beautiful consistency and no weird edges !

Cream cheese frosting is a little more difficult, in that it’s heavier and may slip off the cake at one point or another. Don’t try and do complex works of art with it, it won’t help you as much as you’d like it to.

You should also think about what kind of cake you’re making. What flavors do you have ? Buttercream works with any flavor of cake, while cram cheese works incredibly well with a list of cakes.

For example if you’re making a carrot cake, you’d definitely going for cream cheese. The tangy notes and creaminess go very well with the slight cinnamon. As does a pumpkin cake, or spiced apple cake.

Red velvet works great too, and chocolate cake works great. The ‘cheese’ part gives the whole cream a lighter, fresher flavor because it can also cut through all that richness.

And, if you’re using something really delicious like fruit jam, cream cheese frosting will work just like a no-bake cheesecake.

Meanwhile, buttercream is delicious in its own way and will definitely work with any vanilla, chocolate, spice, and caramel cake. But it won’t contrast them as a cream cheese would.

You know, you could always just combine the two, and add more butter to the cream cheese than you normally would. This way you can get the best of both worlds, and you won’t get as tangy of a flavor.