Ever wonder why we don’t use pasta(especially spaghetti) instead of noodles and vice-versa ? They do look very similar and are used in a similar way, so why not ?

I decided to do a little bit more research on this topic, and I found quite a few differences between pasta and noodles that I want to share with you in this article.

Noodles are best known in Asian cuisine even though the name comes from the German word “nudel”. Mean while pasta is a staple of Italian cuisine, and it makes you wonder if they’re not related.

So let’s see if the noodles are the same thing as pasta, or if they can be substituted one for each other. 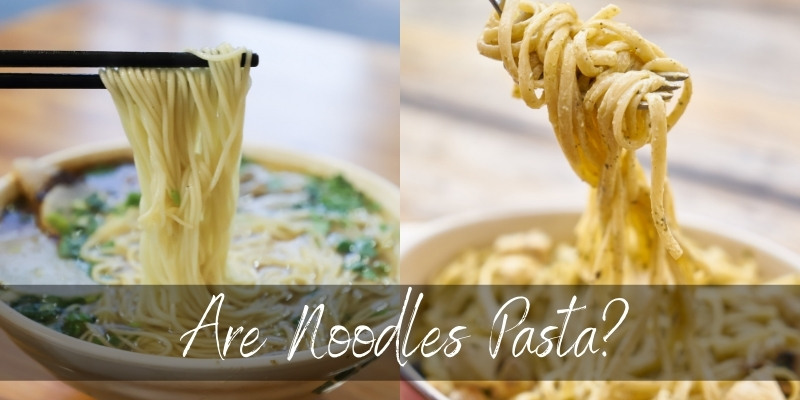 Table Of Content show
1 Are noodles pasta?
2 How are noodles made?
3 How is pasta made?
4 Can you use pasta instead of noodles ?
5 Pasta vs. noodle, which one is better?
6 Conclusion

Yes, technically, all noodles are a type of pasta because the main difference between pasta and noodles is that noodles must contain at least 5.5 percent egg content, and pasta doesn’t have to. Pasta is often simply water and flour, or if it does have some egg there is very. very little.

This is a very good question since pasta and noodles can look similar and have similar taste and texture in some cases. Though all noodles are pasta, not all kinds of pasta are noodles since there can be pasta with 0 or less than 5.5% egg content.

Noodles can come in any shape or form, but they usually are the long, thin strip you are used to. In contrast, pasta comes in many different shapes, forms, and even colors. 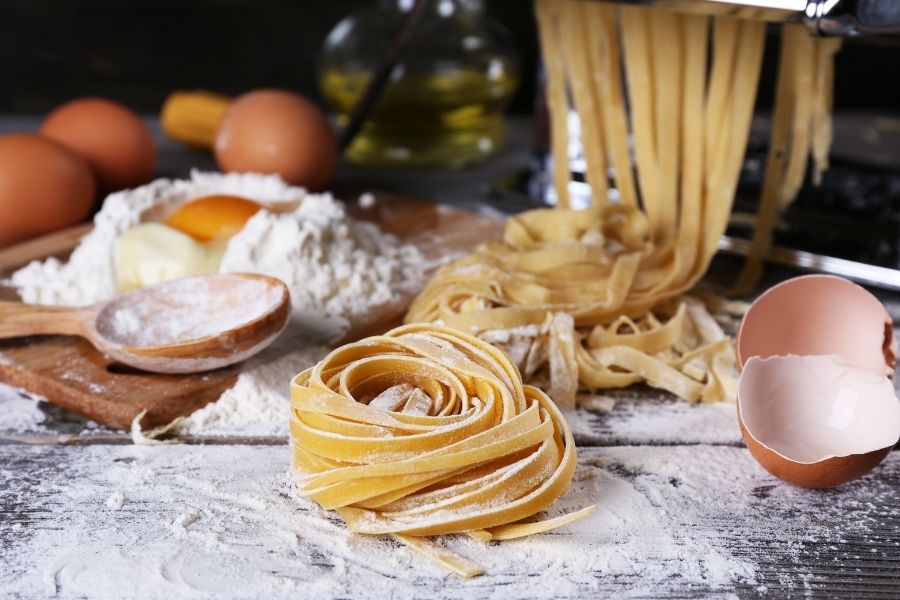 How are noodles made?

Noodles are typically made from unleavened wheat dough and stretched, rolled, or extruded, then cut into different shapes, especially the long thin strips.

According to The National Pasta Association, noodles must contain a minimum of 5.5 percent egg solids; otherwise, they can’t be called noodles.

Noodles are mostly used as boiled noodles, but they can also be fried. When cooked, noodles usually have a softer texture than pasta and are easier to use in soups. This is especially true if the pasta follows the Italian rule that says you can only use durum wheat in the making process.

How is pasta made?

Pasta is made from unleavened durum wheat flour mixed with water (and eggs in some cases), then formed into sheets or different shapes depending on the type of pasta you are going for, then cooked into boiling water. There are two main types of pasta: dried and fresh.

Fresh pasta is used immediately after they are made. The cooking time is much shorter for fresh pasta, and they tend to be a bit softer than cooked dry pasta.

Dried pasta is meant for storage and later use. These are what you usually find in the stores. Fresh ones, if available, will be found in the refrigerated section, not on shelves.

Most of the time, dried pasta will not contain eggs when fresh pasta tends to have egg in its recipe.

Most of us think pasta comes from Italy since they have made it known worldwide, and it is almost impossible to find an Italian restaurant that will not brag about how they make pasta. But the truth is that pasta’s original roots are impossible to find. The recipe for pasta is very simple can calls for basic ingredients that can be found anywhere.

So while Italy did popularize pasta, and we’ve all come to regard pasta as the most Italian food to ever serenade a piece of Parmesan, there is no clear proof that it is 100% Italian and comes from nowhere else. It is the same case with pancakes, crepes, galettes, and any flatbreads to ever grace the face of the earth. Simple, comforting food that could’ve originated anywhere and is now an international dish.

Can you use pasta instead of noodles ?

You can’t use pasta instead of noodles if you want an original Asian dish. You can substitute them only if you have no choice, but I can’t see that situation happening too often. In this case, you gave up on the expectation of an original dish, and you can be sure that its texture will not be the same. Even the very thin pasta – angel hair – will not behave the same as noodles.

Also, the taste will not be the same since most noodles have salt added in the making process when most pasta types are salt-free. So in short, if you really have no noodles for your fried noodles, you’re better off with steamed rice instead of pasta. It’s more authentic and will give you a way better flavor.

Pasta vs. noodle, which one is better?

There is no clear winner here since noodles and pasta are very different in flavor and they are used differently.

Noodles are a staple food for Asian cuisine, and this will make it almost impossible to say that you really know how good noodles are since Asian cuisine is big and there are tons of ways to prepare noodles.

How would you compare a plate of carbonara with fried noodles ?

There is not a big difference between pasta and noodles, but in some cases, egg content and the salt added in the making process will make a big difference in the taste and texture of the noodles.

You can find some types of pasta that are very similar to noodles since they can contain egg and salt, but most of them don’t.

So if you ever want to use pasta instead of noodles, do it only if you have no choice and also after you read the ingredients on the label to make sure you get the most appropriate taste and texture for your dish. Still, consider rice before pasta.

I hope I cleared some of the confusion, even though it is a bit annoying since pasta is a complex product with many different types that are either similar to noodles or very different.