Parmesan is pretty much the cornerstone of pasta ingredients. It just magically makes everything better, creamier, adds a ton of flavor and is just soooo irresistible.

But does Parmesan cheese melt ? If you’ve ever used some then you know sometimes it does, sometimes it’s… weird.

This is what we’ll be talking about today: whether or  not Parmesan melts, why it sometimes acts weird, and how you can choose the best one. 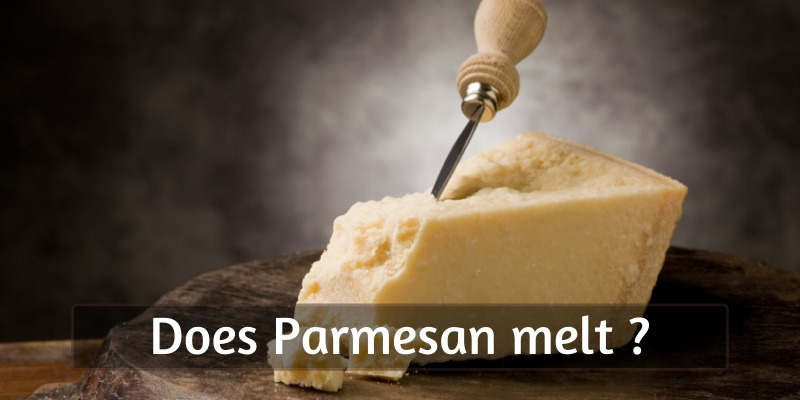 So does Parmesan cheese melt ?

Yes, Parmesan does in fact melt. If you bought the real thing then it’s going to be very creamy and practically disappear into your sauce – or become your sauce.

This is because this is a cheese made with rennet – an enzyme that makes the milk cords dissolve very easily when heated.

It does thicken sauces a little so keep that in mind before using Parmesan. It also provides a great deal of salt and umami flavor so only season after you’ve added the Parmesan.

Alright, but why doesn’t it melt sometimes ? We’ll get to that, don’t worry. First we’ll go through some examples of Parmesan cheese you can find at the store so you know which will generally melt and which will not.

Freshly grated means you bought the big slice and you’re grating it yourself, at home. Assuming you’ve brought home actual , original Parmesan cheese and not a rip-off. Those are very common and we’ll talk about them as well. 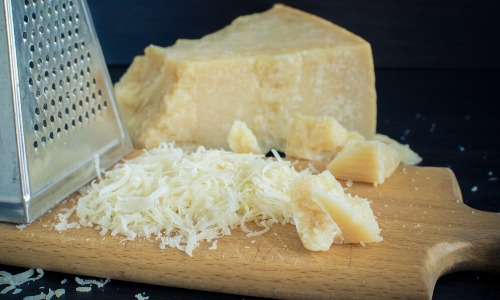 But until then, know that the only way to be sure your Parmesan will melt, and it will do so the right way, is to get original Parmigiano-Reggiano and grate it yourself, at home.

It’s a bit expensive, yes, but a little goes a long way and you’re not using all of it in one sitting.

If you buy pre-grated Parmesan you might run into a couple of problems. First, it might not melt well and remain clumpy. This is due either to poor Parm quality or a bit of cornstarch that’s usually added to grated cheese to stop it from sticking.

And when you’re trying to melt the cheese it might just not work as you want it to. Oh well.

Unfortunately the same is true for shredded Parmesan. How is this different from grated ? Shredded Parmesan usually comes in the form of big-ish flakes, at least bigger than what the grated ones look like.

These may melt a little bitter than the pre-grated ones, simply because there’s less non-stick agent added.

Again, if you have the misfortune of getting a counterfeit Parmesan it still won’t melt well.

We might be very biased on this particular topic, so take this with a bit of salt, but we’ve never found ground Parmesan that’s actually any good, or that actually melts.

It’s coated with a bit more non-stick modified cornstarch and it might be the reason why it’s just so weird in texture, kind of like sawdust.

In our opinion, it’s best to just leave the ground Parm alone and go find the real deal. 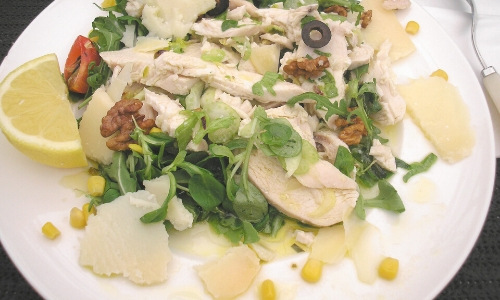 Alright, let’s talk a bit more about why Parmesan sometimes melts, and why other times it’s a nightmare. We’ve ruined a few pasta dishes with stringy Parmesan so we’ve had our share of mishaps.

It’s not always the case, and it’s not always the only problem. But what we’ve found (and others have complained as well) is that store-bought shredded/grated/ground Parmesan doesn’t really melt. This is true for other cheeses as well but Parmesan is the topic now.

What are those non-stick agents ? It can be a number of things, as we’ll talk about them.

Their main point is to stop the cheese from clumping together. Cheese will clump together when there;s moisture on the outside, so the outside needs to be as dry as possible OR have a very dry coating that will stop this from happening.

Examples of commonly used non-stick agents are cornstarch (plain or modified though the exact nature of the modification isn’t stated), plain flour, or cellulose.

These are all used in a very fine, powdery layer that normally should not affect the flavor of the cheese.

The trouble comes when there’s a bit too much of this stuff used, or when it’s not proper quality and/or the Parmesan itself is not very good and you end up with a lumpy mess.

You won’t always know if which brand provides the most decent pre-shredded/grated/ground cheese until you’ve tried it, so there’s going to be a bit of trial and error involved.

Counterfeit Parmesan will be stringy

If you’ve bought fake Parmesan then you’ll know it when you have to melt it. It might taste believable and actually have a nice flavor, but the difference in ingredients and recipe is what will give it away.

Real Parmesan will melt the moment it touches something reasonably hot. So if you grate a block of Parmesan over steaming pasta and it does not immediately melt, then you’ve got a fake on your hands.

The problem with fake Parmesan is that it uses acids alongside with rennet.

Rennet is an enzyme that coagulates milk into curds and is what all melty, gooey cheeses have in common.

Acid cheeses are those that will keep their shape no matter what, like cottage cheese, Halloumi, Paneer, most fresh goat cheeses and so on. The acids used are usually leftover from other cheeses and may sometimes include common ingredients like lemon juice.

This kind of cheese is great for grilling since it keeps it shape, doesn’t break apart, and will soak up that smoky grill flavor.

Back to fake Parmesan, there’s a bit more to it what just the rennet and acids, and we’ll explain in a bit.

Just know that if your Parmesan starts to get stringy and sort of tie up your pasta while you’re stirring it then it’s NOT rennet-made and there’s not much you can do to help.

We’ve tried heating the pasta again and continuously stirring for about 5-8 minutes and it seemed to come apart a little, but still help together for the most part.

Alright, let’s talk about why Parmesan isn’t just rennet cheese, why folks even make the fake Parm, and why it’s got that PDO (protected designation of origin) label on. 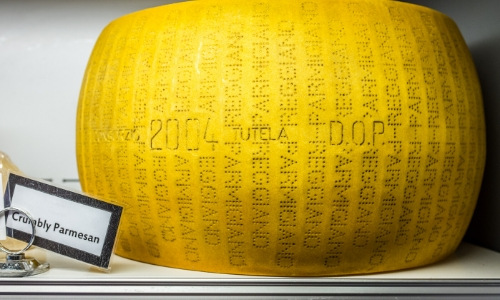 Real Parmesan is made in some very specific locations in Italy:  the provinces of Parma, Reggio Emilia, the part of Bologna west of the Reno, and Modena (all in Emilia-Romagna); and the part of Mantua (Lombardy) south of the Po.

There’s something very special about the grazing grounds these, or so the locals say. Making it anywhere else will result in sub-par cheese.

The processing of Parmesan is a fairly complex and long-winded thing, aside from it being aged for a minimum of 12 months and not longer than 36.

Also there’s a committee dedicated to inspecting new Parmesan rolls every year, and it judges each and every one of those rolls. Finally they’re stamped with a roll number and date, and you will find those on the original, real-thing cheese slices in the supermarket.

Due to how popular it is, it’s become a bit expensive and some companies are trying to offer a very similar cheese at a lower price. They can legally use the name Parmesan outside of the European Union, as long as they don’t name it Parmigiano-Reggiano (PDO).

There’s a lot of history with Parmesan and it goes back hundreds of years, with people actually considering their wheels of Parm treasures, like aged wine.

There’s actually a Parmesan mafia, as odd as that may first sound. When you think of how protected this cheese is and how much people care for it, then stealing cheese and making profit off of it isn’t that unexpected.

It’s a lot like the avocado cartels in Central and South America.

So. We know we went on a bit of tangent there but hopefully you now know what kind of Parmesan to get to actually get it to melt. May your pasta and Alfredo sauce never be clumpy !