Sesame seeds are everywhere, and as often as you see them you might not really notice them. On burger buns, on pastries, on breads, on breadsticks, in some ice cream varieties, in sesame oil, on sushi, part of a dessert filling, and so on. Normally the only sesame we knew of was the plain ‘ol off-white sesame.

But in the past decade or so more and more black sesame has creeped into the usual white sesame products. The result is a nuttier, even more delicious sesame seed and it adds a whole lot of visual impact. 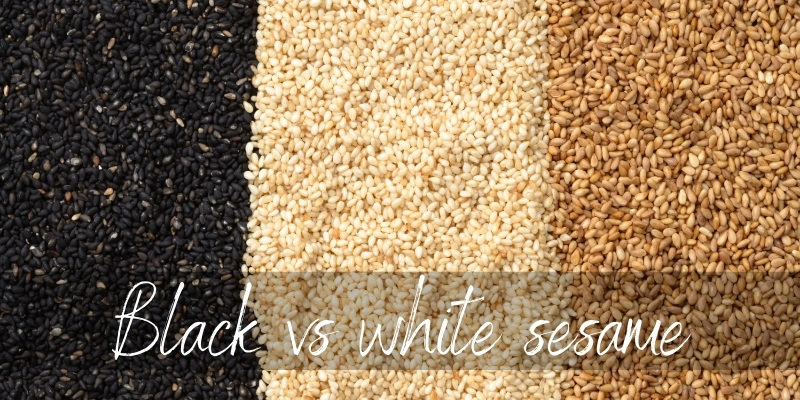 Black sesame seeds are a different variety of sesame, often a little larger than the white ones. Some black sesame seeds still have the hull on, some have it removed. There is also a difference in flavor, with white sesame being milder and less bitter.

Black sesame often ends up a little bit crunchier, which delights many people. However there is a difference in price between black and white sesame, with black sesame being often double the price.

For example on Amazon, McCormick sells their hulled white sesame at $0.62 an ounce, and black sesame at $1.01 an ounce.

You may be surprised to find out that sesame does, in fact, have different varieties. And each variety has a different color. The most common one, in Europe and America, is the off-white creamy sesame seed. For a very long time it was the only known sesame seed.

Read also: Why Are Eggs White ?

But there are more seed colors, like light brown, light blue, black, reddish-brown, gold, and gray. These are simply less known versions of the same off-white sesame. The black sesame seeds are very common in Asian cuisine, with Japan the biggest black sesame importer.

As to why we grew up knowing white sesame was the only sesame, we’re not sure but it rocked out world when we found out the other versions exist.

Not all black sesame has the hull on

Let’s address the hulled and whole issue. Sesame, like any other seed, has an outer shell, which then has a hull, which then has the seed itself. The hull is edible, as it’s very thin and digestible. It’s what gives whole sesame its nuttier, slightly more bitter taste. 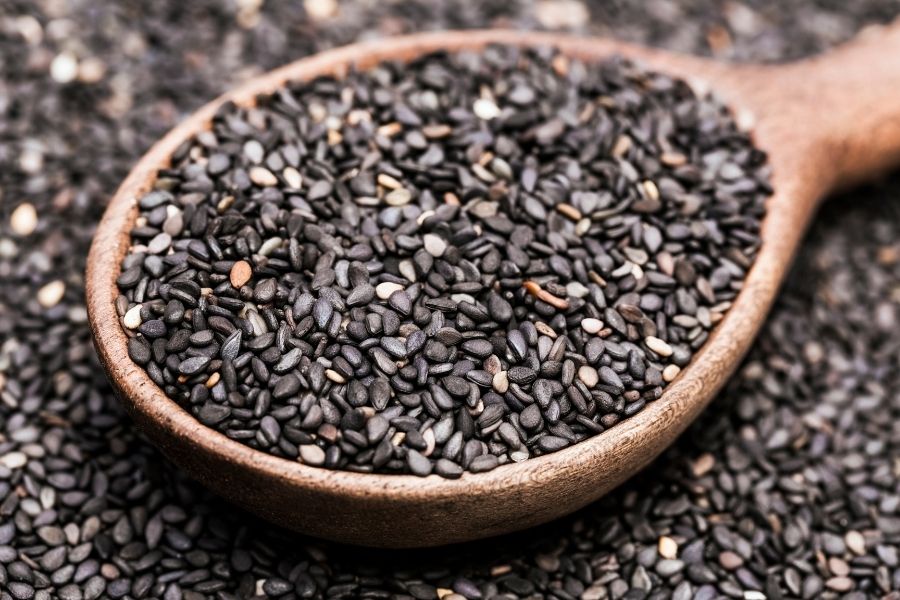 Most sesame is hulled, meaning that after harvest it is run through a machine that makes the seeds rub on each other, so the hull will flake off. They are still raw seeds, and are almost always packaged and sold this way. They are edible as-is, but if you want them to have a better flavor you can toast them.

It just so happens that black sesame almost always has the hull left on. If you were to remove it, you’d notice the seed itself is just as black as the exterior. It’s not like sunflower seed.

How can you tell the hull is still on ?

Hulled sesame will not be as shiny as hull-on. The hull is like an outer coating, shiny and a bit crunchy, and the pointy end of the sesame is not rounded, it is actually a bit pointy.

Hulled sesame is slightly translucent, as opposed to whole sesame that is opaque.

Why is black sesame more expensive ?

Black sesame is mostly imported in America and Europe, since it’s primary producers are Myanmar, Sudan, and India. This ups the price considerably, since there are shipment feeds and extra middlemen.

Aside form this black sesame has become internationally recognized as trendy, and possibly better than white sesame, which in turn fetches a higher price. The difference in nutrition stems from the extra minerals, vitamins, and fibers that are in the hull. That being said, the differences are fairly small.

Can I use black sesame instead of white ?

Yes, you can easily swap white sesame for black without changing the recipe. The only difference is that the black sesame, if whole, will be a bit crunchier than the white version. This can be a good or bad thing, depending on that you’re looking for in your recipe.

If the extra texture is fine for you, then you’ll definitely love black sesame. If you’re looking for just a bit of sesame flavor, you can grind the sesame seeds in a spice grinder and mix that into the recipe.

If you’re all out of sesame, white or black, you can use tahini or sesame seed oil as these will give you the cleanest sesame flavor. Tahini is a paste made of toasted and ground sesame seeds, and is often added to hummus. It can get a little bitter and the sesame oil may separate on top. Be sure to get a good brand.

Sesame seed oil is also made of toasted sesame seeds, which are also ground but this time they are also pressed to remove the oil. Sesame seeds are particularly high in oil, so you can get a lot out of them.

Of the two, we recommend sesame oil the most since it’s got a flavor that is simply better. And a little goes a long way, a few drops of sesame oil really help things along.

And that’s about it ! Now you know the main difference between white and black sesame, that is, they’re just two types of sesame. The black ones usually have their hulls intact, which makes they crunchier and a bit nuttier. Both are just as good in any way you want to use them, and a combination of both makes for a great presentation.