Cupcakes are probably everyone’s guilty pleasure. You can have just one, or two, or three. And they’ve been so overdone people are starting to have less of them…or are they ? It seems cupcakes are still very popular, though maybe not as much as they were in the early 2010s.

Personally we’re big cupcake lovers, and we still think that cupcake wedding fad was fun. But just why are cupcakes so popular ? They’re been around for centuries, but they haven’t boomed like this before. Here’s what we know. 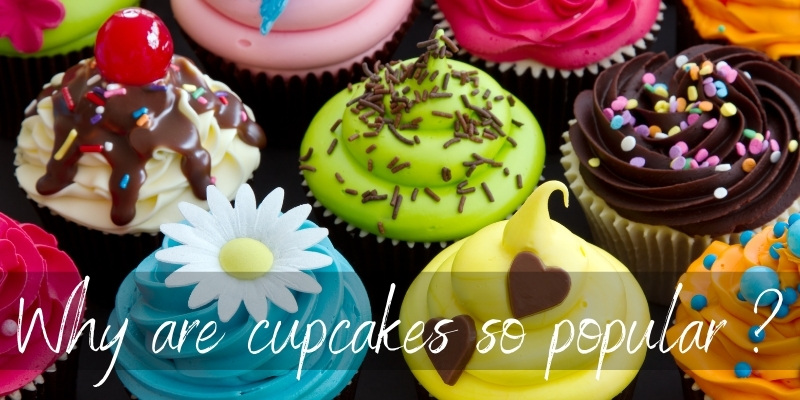 Table Of Content show
1 Why are cupcakes so popular ?
1.1 1. They’re cute and customizable
1.2 2. Higher icing to cake ratio on a cupcake
1.3 3. Cupcakes are small, you can easily control portion size
1.3.1 What is the standard cupcake size ?
1.4 4. Cupcakes became wildly popular through media
1.5 5. Cupcake wedding cake was a strong trend
1.6 6. For some people cupcakes bring on nostalgia
1.7 7. You can easily get several flavors of cupcakes

Why are cupcakes so popular ?

Cupcakes are so popular because they’re tiny cakes you can have all by yourself, you can have several flavors in the same box, and they became super trendy after Sex and the City had a brief cupcake moment. After that an international phenomenon rose, to the point where cupcakes are present in most countries, in many forms.

It’s not just the media pushing a cupcake agenda. it’s the people recognizing the many advantages of cupcakes. So let’s take a closer look at why cupcakes are so popular.

The cuteness factor is undeniable when it comes to cupcakes. They’re small, like the world’s smallest cupcakes, just for you. A whole ‘cake’ that you can have for yourself.

You can get very specific cupcakes, like for different occasions. For example bridal shower cupcakes are a thing, as are ones for baby showers, gender reveals, graduations, house parties, Halloween, Easter, and so on. They’re a perfect mix between something celebratory and a gathering that is mostly informal. 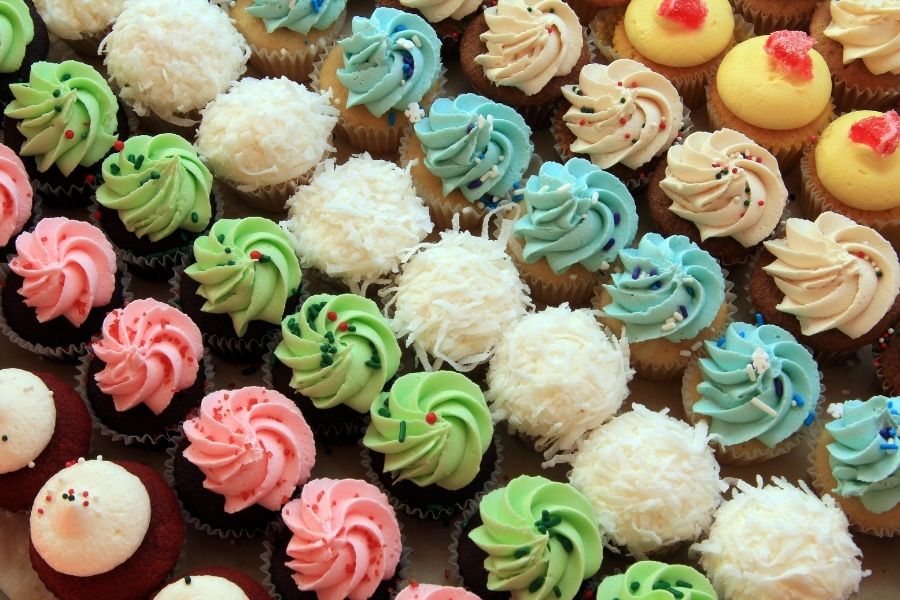 2. Higher icing to cake ratio on a cupcake

Whenever you get cupcakes you end up with a whole lot of icing on your plate. That’s because the icing to cake ratio is much higher on a cupcake than a regular slice of cake. This is especially true if the cupcakes are both iced and filled !

We don’t know about you but that makes us really happy, since there’s almost never enough icing on regular cakes.

3. Cupcakes are small, you can easily control portion size

Since cupcakes are so small, compared to a slice of cake, you can easily portion-control. They’re also great for kinds if you want to limit their sugar intake. Whenever you have something to eat in front of you, you’re likely to want to finish eating all of it. So just one cupcake is much easier and less damaging than a slice of cake.

Of course you can always reach for another cupcake, but you can also buy just one cupcake and have it on the way home from work. Just a little sweet snack, without buying a whole cake.

There are various cupcake sizes, though most of them fall within the default sizing. And of course, a jumbo cupcake will be about as big as a slice of cake so the portion control thing doesn’t apply anymore.

What is the standard cupcake size ?

The standard cupcake size is 2″ x 1. 1/4″, and most of them follow the standard size. Jumbo cupcakes are almost twice the size of standard, while mini ones are about half.

Ever since Sex and the City had that small Magnolia Bakery moment in the early 2000s more and more such shops have cropped up. This means they had a lot of clients to serve, and the whole idea of cupcakes gained a lot of popularity.

Of course all the credit can’t go to Magnolia and Carrie Bradshaw alone, but they were instrumental to the large-scale industry of cute cupcake shops in fairly trendy neighborhoods. They popped up everywhere, all over the world, and today there are as many cupcake versions as there are cakes.

Another trend that really helped bring cupcakes into the spotlight was the wedding cupcake cake. You definitely know it, the weddings where the cake as actually a lot of cupcakes set on a beautiful, tiered serving plate.

These were key for many boho, cute, indie, and non-conventional weddings. And they were especially popular with weddings that had a smaller invite list, since 400 cupcakes doesn’t sound as cute as 40.

But the trend pretty much brought cupcakes to the point where people now either love them or hate them. They’ve been done to death and, compared to the mid 2010s, cupcakes aren’t as popular but they’re still going.

6. For some people cupcakes bring on nostalgia

Cupcakes were here before Carrie had that vanilla cupcake, and for most people cupcakes were a home-made treat. Something mom or grandma made and it was a sort of mini-celebration. It wasn’t something to post on your Insta story, but it brought a sense of belonging to a family.

For many people the cupcakes of today are still a reminder of those days, and they’re feel particularly attached to the idea of cupcakes, no matter the icing and flavor.

Read Also: Are Cupcakes And Muffins The Same ?

7. You can easily get several flavors of cupcakes

And the best thing ? You can get one of each, you can leave with a box of 12 different flavors and no one will ask you why. No flavor commitment, so you can bring different versions home to enjoy throughout the day.

To us that’s possibly the biggest selling point, and then the fact that you can eat just one and have your sweet craving satisfied. We know cupcakes are many things to many people, but that’s just what makes them so enjoyable.