Butterscotch and toffee are two of the most common sugar confectioneries out there. They are several centuries old, and they are very easy to confuse with one another. Still, there are some key differences that set them apart. Which of these two you decide to use may make or break your recipe, so read on to make sure you’re using the right thing. 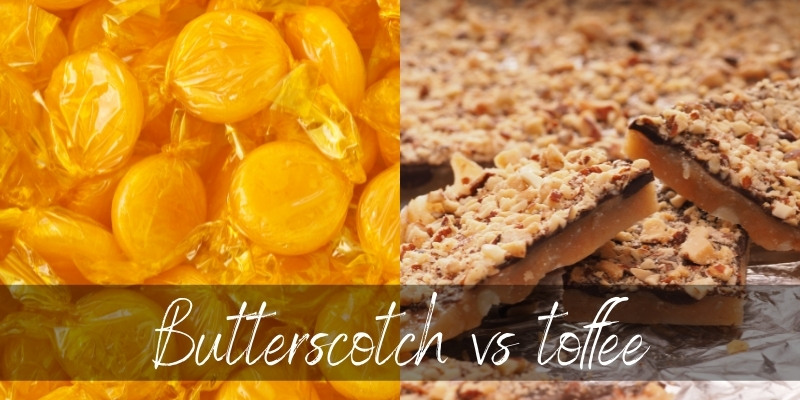 The key difference between toffee and butterscotch is the temperature, with butterscotch boiled until the soft crack stage (121-130 C /250-266 F) while toffee is boiled for longer, until it reaches the hard crack stage (146-154 C /295-309 F). This means toffee has a higher sugar concentration (99%) than butterscotch, allowing for brittle, better flavored-candy.

In essence both butterscotch and toffee are similar in flavor but they behave differently due to the difference in sugar concentration. Here’s a more detailed breakdown of their differences, and why they matter.

Toffee is boiled for longer, is more concentrated

Temperature is key when handling sugar, and in the case of butterscotch and toffee it makes literally all the differences. Just like ghee and clarified butter, the difference is slight but it changes the entire result.

Both versions can me simply measure with a candy thermometer, but a candy thermometer will not be able to assess the texture of the mixture. Texture is key, and toffee is fully brittle and will crack all the way through. Butterscotch is a bit flexible and may even be chewed.

Read also: What Is Surimi Made Of ?

Butterscotch is the base of most hard candies

Butterscotch is usually the base for many hard candies, including the famous Werther’s Original. This sort of candy has been around for many years, and until various flavors were added, a sugar and butter candy was THE candy to have. 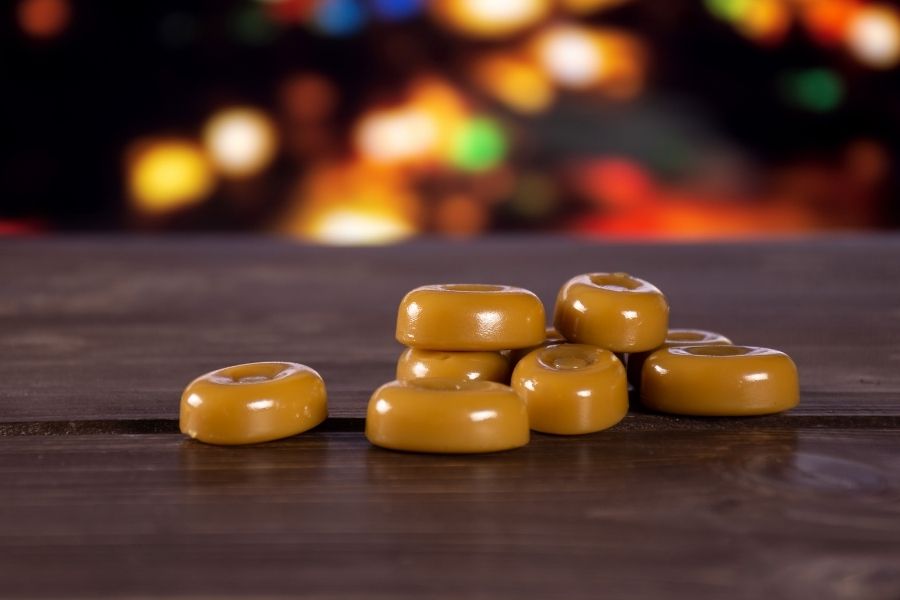 In later versions, such as mint or fruit candies the butter is not added, and white sugar is used in place of brown.

Toffee is often thickened with flour, may contain nuts

While butterscotch only contains brown sugar and  butter, toffee may also contain flour in some recipes. It’s added to thicken and slightly soften the mixture.

Nuts and raisins are sometimes found in toffee bars, such as Heath-style bars. They may also end up with a bit of chocolate on top as well.

Butter scotch is far plainer by comparison. At most it’s blended with a bit of heavy cream to form a sauce for various sweets, especially sundaes.

Butterscotch is most often used as a flavoring

When it comes to flavoring candies and sweets, it’s more common to find butterscotch rather than toffee. This is perhaps due to the fact that butterscotch is more pliable and may blend better into other food items.

Something interesting to note, you will sometimes find butterscotch-flavored sweets without there being any real butterscotch in them. This is artificial flavoring, and it’s often a bit off.

Can you use butterscotch instead of toffee ?

You can use butterscotch instead of toffee in nearly any recipe, as long as you remember the difference in texture. Butterscotch is a bit softer and more pliable than toffee. It does not crack all the way through, instead it merely cracks on the surface while the inside remains chewy.

The name ‘butterscotch’ is lost to time, though there are various theories as to how it came about. They range from the old ‘scotch’ meaning  scored, to cut on the surface, to a variation on ‘scorched’ as in scorched sugar with butter.

In the end the real reason it’s called butterscotch is lost to time. And give how delicious this sugar confectionery is, we can live with this lost knowledge.