If you’re any kind of seafood lover you’ve likely stumbled across surimi. This is a piece of seafood you can get your hands on at pretty much any grocery store, and of various quality. Most of the time we think of cheap, possibly dubious ingredients when we think of surimi. But what is it actually made of ? It’s been on the market for decades and it seems to be thriving.

This is what we’ll explore today: surimi, what it’s made of, why it even exists, and what you can substitute for it, in case you have to. So let’s find out the secrets of surimi, shall we ? 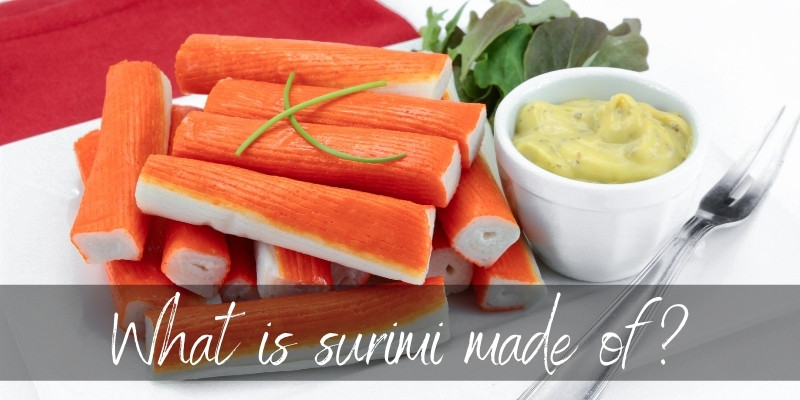 Table Of Content show
1 What is surimi made of ?
1.1 How and why did surimi originate ?
1.2 What makes surimi orange/pink ?
1.3 What does surimi taste like ?
2 Surimi substitutes
2.1 Fish fingers have basically the same ingredients as surimi
2.2 Any mild, whitefish meat can be used in place of surimi
2.3 Small shrimp, for the color and superior flavor

What is surimi made of ?

Surimi is actually made from fish paste, typically a whitemeat fish such as pollock. Other ingredients may be added, like egg white, starch, food coloring, salt, oil, and crab flavor. The paste is then seasoned and shaped into either sticks or rolls, and it’s then cut to the desired length before packaging.

So surimi does contain fish meat, which makes it a type of seafood, but it’s not legally allowed to be labeled as seafood in most countries. Most of the time you will see surimi used for imitation crab meat, despite not containing any crab meat at all.

How and why did surimi originate ?

Surimi is actually a very old food, and it’s highly popular in East Asia. It’s always been a type of fish paste, or rather a meat paste. Surimi stands for ‘ground meat’ in Japanese, so once you leave Europe or America, the word surimi can mean any sort of finely ground meat or meat paste.

Fish paste has been used in Asia cuisine in many ways, and in some parts is eaten as-is, without additional seasonings or flavors. When we know as surimi in the Western world is the fish-version of surimi, and it has take this particular shape and look in an attempt to imitate crab meat. As you know, real crab meat is wildly expensive and an imitation found its niche immediately.

Back in 1953 the Hokkaido government applied for a surimi patent, and has produced surimi in Japan. The USA became involved in the surimi trade in 1976, and this has brought surimi to the Western world.

Nowadays you can find surimi in nearly every grocery store that has a frozen meat section. If they have frozen fish and fish fingers, they likely have surimi too. This fish paste went from a classic East Asian ingredient to a very successful international seafood-type of ingredient.

Surimi gets its orange-pink coloring from a combination of natural food dye, such as paprika, carmine, caramel, and possibly a sprinkle of annato. Of course, some companies simply use food coloring to dye their surimi the desired color. This is most often the case for rolled surimi.

Stick surimi that imitates crab sticks has a better color added to it, and it’s more likely to have more natural ingredients to give it it s color. The surimi paste, the actual fish paste, is entirely plain and white.

Surimi tastes very faintly like seafood, and less like actual fish. Very often it has a bit of crab flavor added to it, in an attempt to bring the sweet-briny flavor of crab meat. Most of the time even that flavor is very faint.

Whenever you need to substitute surimi you have a few options to think of. Or, maybe you simply dislike surimi and would like to get a whole other type of seafood on your plate. Below are three of the best options we think would stand in great for surimi. Which you choose depends on what you’re trying to achieve in terms of color and flavor.

Fish fingers have basically the same ingredients as surimi

Fish fingers have probably been everyone’s first foray into seafood, or anything tasting like fish. The downside is that fish fingers are highly processed and the batter they’re coated in has barely any nutritional value. But they do bring a delicious crunch ! And in comparison to surimi the meat in fish fingers are less processed and simpler to understand. 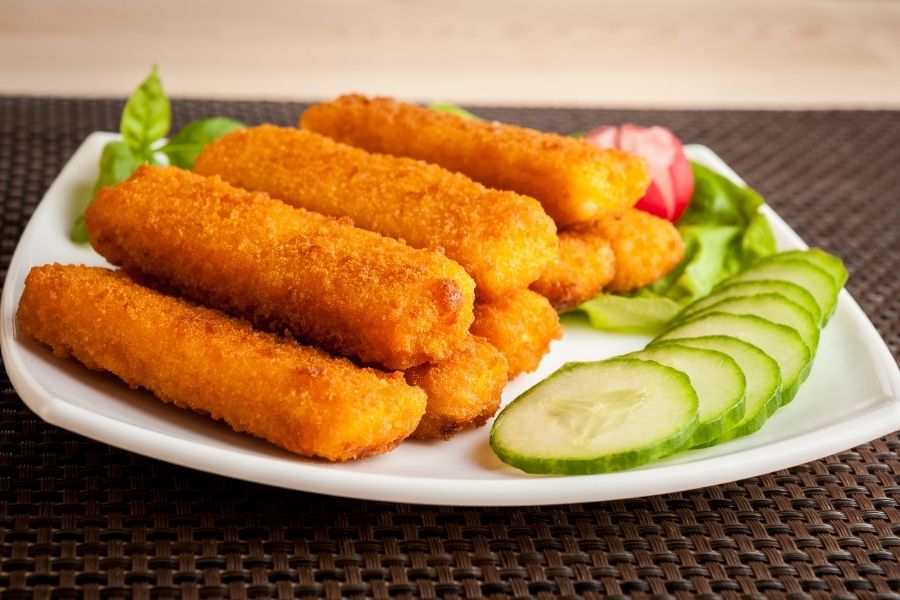 A pack of high quality fish fingers will have actual fish fillets in it, while a lower quality one will have a fish paste or ground fish meat, shaped and breaded. The most common fish for fish fingers are cod and Alaskan pollock.

Any mild, whitefish meat can be used in place of surimi

If you’d like to keep your seafood very simple than all you have to do is look for a piece of whitemeat fish, and use that instead of surimi. The flavor is minimal, as is the odor, and the texture is pretty fine.

Examples of whitemeat fish you can try are: Atlantic pollock, Alaskan pollock, cod, halibut, and flounder. These all cook very quickly and have a flaky texture to them. And like surimi, they won’t overpower your dish with a strong fish flavor or smell, but they will not be bland.

Small shrimp, for the color and superior flavor

If you’re looking for something a little more fun and tasty, then try using shrimp. The smaller ones are a pain to devein, but not everyone likes to devein them anyway. So what’s so great about shrimp ? Let’s see:

And yes, shrimp are more expensive than surimi. These are for a treat, if you’re working with a low budget. Some of the best seafood dishes incorporate shrimp and surimi, such as paella, pasta, or even a quick fry in a pan with some roast veggies on the side.