So today we’re going to help you figure out whether cereal can or can’t be eaten with water, and what other options you have when there is no milk. Who knows, maybe you’ll find a brand new way of eating alienating your friends and family. 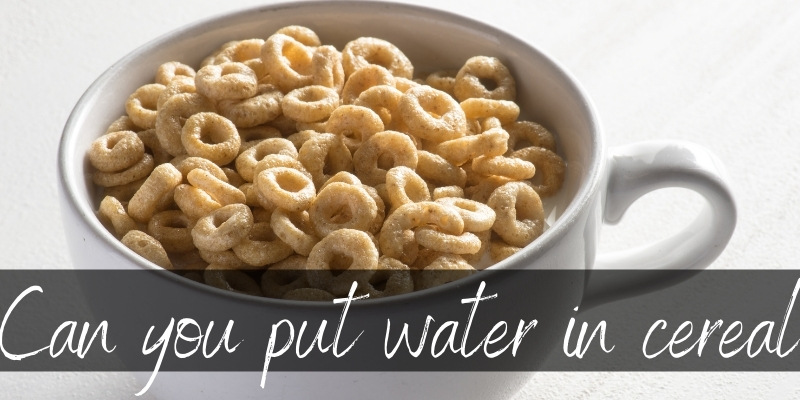 Table Of Content show
1 Can you eat cereal with water ?
1.1 Does cereal taste the same with water ?
1.2 It’s all a matter of taste (literally)
1.3 Liquid or cereal first ?
2 Good substitutes for milk in cereal
2.1 Add powdered milk
2.2 Plant or nut milk
2.3 Yogurt
3 Other ways to eat cereal without milk
3.1 Eat them as-is, as a snack
3.2 Add them to your oatmeal
3.3 Mix them into a banana smoothie
3.4 Use as topping for ice cream
4 Conclusion

Can you eat cereal with water ?

Yes, you can eat cereal with water if you like. There is a significant change in flavor and texture, but some people prefer it that way. Cereal is meant to be eaten with milk, but no one can force you to eat it with milk.

It also depends on your cereal. Some types, like cornflakes or oatflakes or just very plain cereal will taste very bland with just water. Unless you add something else for flavor, it might not be the best idea.

Does cereal taste the same with water ?

No, cereal with water tastes very different from cereal with milk. Milk provides a creamy, smooth finish to any flavor due to the proteins and fats in it.

Water has no proteins nor fat, so all it can provide is hydration. The cereal will soften much faster than if you added milk. This may be a good or a bad thing, depending on your preferences.

If you’re eating cereal with flavors that traditionally go well with milk, like chocolate, vanilla, caramel, cinnamon, or nuts, then you may be disappointed. Adding water instead of milk will make cereal taste very flat.

However if you’re having a very fruity cereal then water may go well, since milk doesn’t really sit well with fruity flavors.

Read also: Can You Make Pudding With Water Instead Of Milk ?

It’s all a matter of taste (literally)

There’s no way to objectively say cereal tastes better with milk than with water. Conventional wisdom dictates that you only eat it with milk, and milk provides the best flavor.

But we’re all different and maybe some people really want to eat cereal with water. They truly believe it tastes better. Our very personal opinion is that milk is the better option, but we’re not here to judge.

Since people are so divided about this, the moment this Reddit thread came to be, the entire internet went up in flames. No one was safe, no one was sane anymore. There was only milk or water, and you were a traitor no matter which you chose.

As the comments in the thread state, some cereals work okay with water, some work better with milk. Perhaps what upset those who like milk in their cereal was the water instead of literally any other options.

We give you a few options on what to put in your cereal when you have no milk, so you don’t have to resort to water. The biggest problem though is which you pour in the bowl first. If you answer this wrong, we really can’t be friends anymore.

Do you put the cereal or liquid first ? Doesn’t matter if it’s milk or water. It’s like putting on a sock and a shoe and then the other sock and shoe.

We all have that friend who puts the liquid in, and then the cereal. If you’re one of those, you’re very wrong and you need to reevaluate your life decisions. Milk or water is one thing, but disrupting the natural order of the world is another.

When you add in the cereal first, you then know exactly how much liquid to add. If needed, you can add more later. If you add the liquid first, you can only add so much cereal and are left with liquid at the end. Reckless. 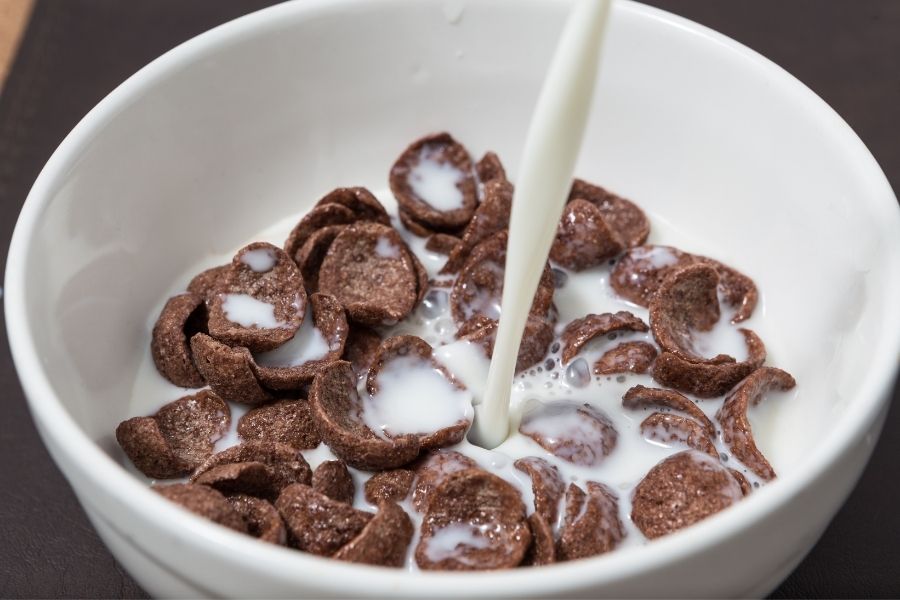 We hope we’re all on the same page here, so let’s get to a few milk substitutes you can use instead of water.

Good substitutes for milk in cereal

If you like water in your cereal that’s fine, skip over this part. We have another section explaining what you can use cereal as, if you’re feeling adventurous with your breakfast.

For those who are interested in substitutes, here they are.

Probably the easiest guess, powdered milk will being back that milk flavor into your cereal. For some reason this type of milk seems to be extra sweet, even if you buy it unsweetened.

Any plant or nut milk will work very well if you want to replace milk. Coconut and cashew milk are the thickest milk substitutes, so it’s up to you if you like that texture.

Depending on what kind of cereal you’re using, you could get a plant milk that enhances or pairs well with that flavor.

Another option is to use yogurt. Even if it means you get full faster and can’t eat as much cereal, it’s still a great option. Due to yogurt’s tanginess this breakfast tends to taste extra fresh.

Other ways to eat cereal without milk

If you don’t want to add milk, or a milk substitute, and simply want an other way to enjoy cereal, here’s a few ideas.

Eat them as-is, as a snack

Possibly the simplest and most straight-forward option, eating cereal as-is is like eating snacks. They’re crunchy, they’re sweet, they’re going to hurt the roof of your mouth, and they’re delicious.

Add them to your oatmeal

If you’re making oatmeal you can try adding cereal for some nice crunch (at least until they soften). For this option you can use pretty much any cereal type you like, depending on your preferences.

Mix them into a banana smoothie

Are you a fan of smoothies ? Then you may like to add some cereals to your banana smoothie, They provide extra flavor and if you ;eave them chunky they add texture as well. If you let the blender powder them down then you’ll simply get a thicker smoothie. 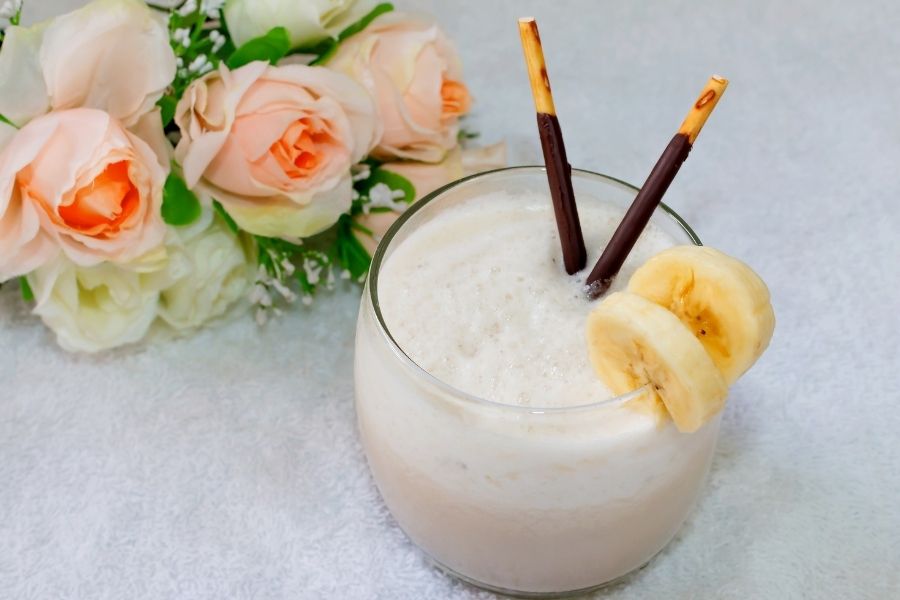 Another option is to make your smoothie as usual, as use that with your cereal instead of milk.

Use as topping for ice cream

We’ve only ever seen this a couple of times but it can work great if done right. You can sprinkle some extra sweet and crunchy cereal on top of a Sundae or your favorite ice cream mix.

And that’s pretty much it. As you can see, there are plenty of things you can use instead of water for your cereal. Still, no one’s going to kick you out of the house if you use water. Just don’t put the liquid in the bowl first.

The conclusion is that you can make cereal with water but the question is, do you really want to do that?

Cereals made with water will not taste as good as the ones made with milk. It can be a good idea if you want to lose weight or if you are lactose intolerant. But other than that, I don’t see why would you do them with water.