If you’re looking to add more dairy to your diet, then you may be looking a different options you have. Both yogurt and cheese are alright for those with only a mild lactose intolerance. But if you really want to keep dairy to a minimum, you might want to know whether yogurt or cheese is a better option.

For this we’ve made a comparison between cheese and yogurt, and hopefully you’ll know which to choose by the end of it. You can have both, but if you want to pick just one these key differences will help you figure out which. 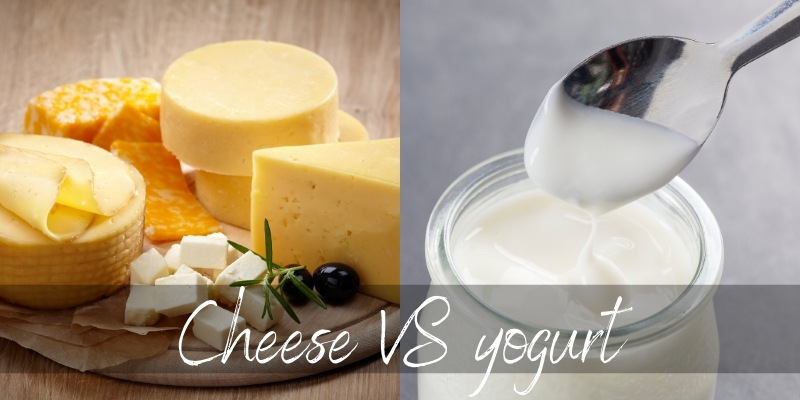 Cheese is much less acidic than yogurt, which may sit better with some people. There is also a higher fat and protein percentage in cheese than in yogurt.

There are probiotics in yogurt (which bring on acidity) that are simply not there in cheese. And finally, despite both requiring milk to curdle, they are made in very different ways.

You’ll notice yogurt is recommended more often than cheese, simply because it’s gut-friendly for most folks and is generally lower in calories than cheese. Still, cheese seems to be everyone’s favorite. We’re going to take a closer look at the main differences between yogurt and cheese so you can choose which suits you best.

1. Yogurt is much more acidic than cheese

So, why is yogurt more acidic ? Well for one thing, a good portion of said acid and bacteria is left in the whey. Yogurt contains much more whey than cheese.

When cheese is made, the curds are strained, pressed into blocks, and then left to dry out and age. Yogurt on the other hand retains a good portion of whey, and is left to ferment longer than cheese.

If you’re wondering just how acidic yogurt is, let’s take a look. Acidity is measured by pH, which is on a scale. A pH of 7 is neutral. Anything under 7 is acidic, while anything over 7 is basal or alkaline.

Milk is around 6.5 so it’s almost neutral. Yogurt is 4.5, which leads it towards acidic foods. For comparison, lemon juice is 2.2, landing it in the very acidic range. Gastric acid is somewhere between 1.5 and 3.5, depending on the person.

Read also: Why Is Cheese So Expensive ?

2. Cheese has a higher fat percentage

Because of the way cheese is made, it ends up having a very high fat percentage. It needs high fat and protein to keep those curds together. Let’s take a look at FDA’s requirements for some cheese types, in terms of fat percentage in a roll or block.

And so on. Yogurt is a different story, as it can have a wide range of fat percentages. But freshly made yogurt, before any processing such as removing fat or adding colors or flavors, should be between 3.25% and 8.25% milkfat.

The actual percentage afterwards will vary, according to how each batch is processed. As you know, some yogurts have a lot of fat skimmed and end up with percentages like 0.5% or 1.5% fat yogurt. Other types have added fat, usually through cream, and end up as high as 10%.

3. Yogurt is quicker to make

Between the two of them, yogurt is much quicker to make than cheese. Both need the milk to curdle, yes, but afterwards cheese needs weeks and months to set and cure and in some cases even develop the necessary mold growth.

But yogurt is much quicker, and is done within a few days and can then be processed, packed, and sold. 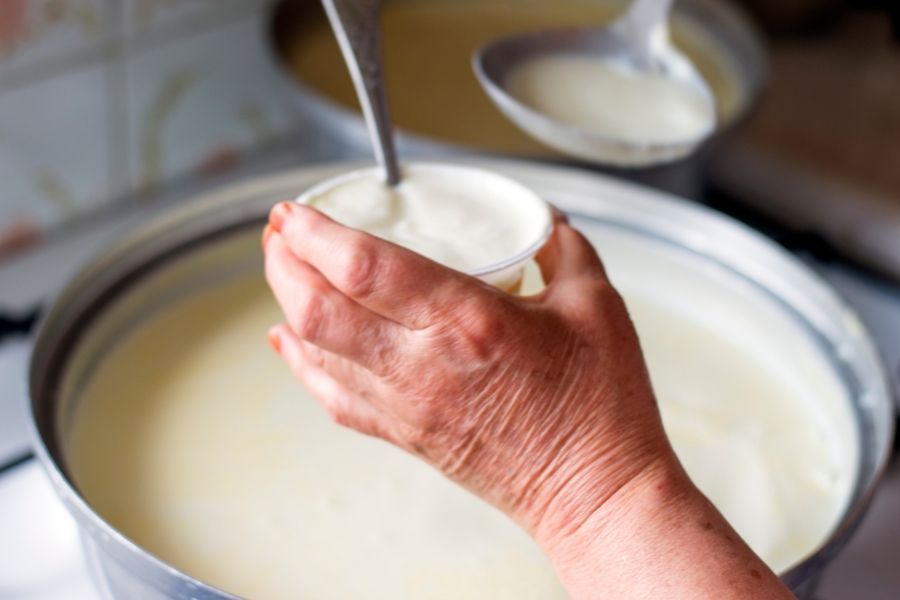 4. Cheese is buttery, yogurt is tangy

Because of the high fat amount in cheese, it ends up tasting buttery, nutty, and very smooth. This is especially true for mild cheeses made of cow milk, like Gouda or Swiss or Colby.

You can get tangy cheese too, but they’re not as common as the smooth, buttery ones. Cheese can get tangy for the following reasons:

Cheese does retain some lactic acid in it, but it’s never as much as a cup of yogurt. By comparison yogurt is always tangy.

5. Yogurt has much more probiotics than cheese

Because yogurt is made by allowing milk to develop the Lactobacillus culture, it brings a lot of probiotics to the table. Or rather to your gut. As you may know, our intestines have a bacterial culture that they need to maintain, for us to function properly. Sometimes an imbalance happens and our good bacteria is flushed out or is outnumbered.

In those cases, yogurt can help by providing more good bacteria, such as the Lactobacillus. This aids digestion, but beyond the stomach.

On the other hand, cheese does not pack such a punch, because the whey is almost completely drained from it. And it’s in the whey that the bacteria live most comfortably, and yogurt happens to have much more of that.

6. Cheese has more protein than yogurt

On the flipside you’ll notice that cheese has much more protein than yogurt. This is because it’s pure milk curd, with fat and protein, and much less whey.

So if protein is what you’re after, then cheese is a better option than yogurt. However we suggest better protein options such as meat, or meat substitutes like soy, nuts, mushrooms.

Is yogurt healthier than cheese ?

Yes, yogurt is healthier than cheese because of its higher amount of probiotics and lower fat. This does not mean cheese is completely unhealthy, it just means that you need to regulate the amount of cheese you eat if you’re trying to lose fat.

Between the two of them, yogurt is less fattening than cheese, as it’s lower in fat, lower in sodium, and it aids digestion. Both can trigger a response in lactose intolerant individuals.

Read Also: Does Risotto Have Cheese ?

Is yogurt a type of cheese ?

Because both cheese and yogurt use milk curds you may think they’re the same. In truth this is not true, the same way tofu is not the same as ground soy.

Yogurt uses the curds differently and relies heavily on bacteria culture. It’s used for its probiotics and it even helps tenderize meat. If anything, yogurt is more similar to kefir tan to cheese.

On the other hand, cheese is high in fat and protein, and very smooth tasting. It’s more similar to heavy cream and cream cheese than to yogurt.

So in short no, yogurt is not a type of cheese. It has so much whey it’s actually liquid (albeit thick), and it’s only viable for a short amount of time. It cannot be cured and aged like cheese.

And that’s about it about cheese and yogurt. It’s really a great comparison and we had a lot of fun exploring all the ways these two are different. Hopefully you can now pick the one that’s best suited to your taste or need. If you’ve got any other food curiosities be sure to check the related articles below, we’re always adding more food facts to make your life that much easier.