Have you ever thought of eating raw leeks? They look and smell pretty much like onions that can be eaten raw, so naturally, you will wonder if leeks can be eaten raw as well.

But the fact that leeks and onions have many similarities doesn’t mean that they are the same, so you thought to double-check this.

In the southern part of my country(Romania), leeks are very popular, and our South is well known for eating a lot of leeks. So one time, I had the same question, can they eat raw leeks? There is no way they only cook the leeks.

So after doing some research, I’ve tried myself, and in this article, I will share with you how it is to eat raw leeks. 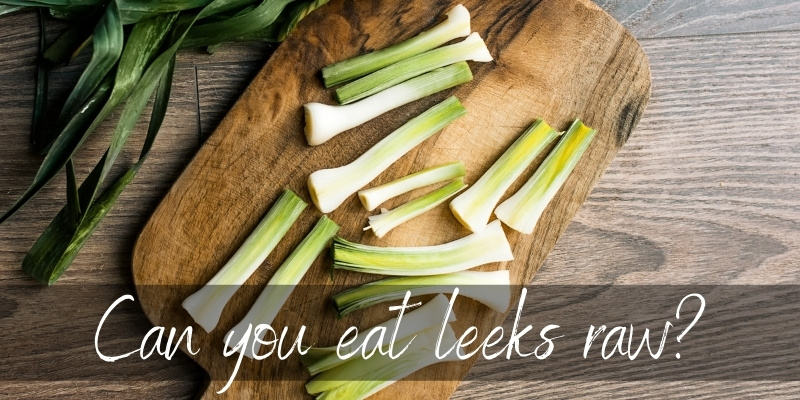 Table Of Content show
1 Can you eat leeks raw?
2 Can you eat baby leeks?
3 What part of leeks do you eat?
4 How to choose good leeks?
5 What to do with leeks?
6 Can leeks substitute onion?
7 Conclusion

Can you eat leeks raw?

Yes, leeks can be eaten raw. They have a milder and sweeter taste compared to onions, making them a really good choice for a salad. The only downside compared to green onions is that leeks have a more fibrous texture.

You can eat raw leeks at your breakfast since the taste is not so strong as an onion and the smell is not as bad, but it’s definitely noticeable.

They still smell a bit like onions, so I wouldn’t eat raw leeks if I had a date afterward.

Make sure to clean them very well before you eat them. Like many other plants and vegetables, they can be treated with pesticides and other chemicals to help them preserve better, and they can hide dirt in their leaves.

Can you eat baby leeks?

They are also better for cooking; the only downside is that usually, they are a bit more expensive and harder to find at the markets.

So if you can afford and can get baby leeks, it is a better choice when it comes to taste and texture than regular leeks. 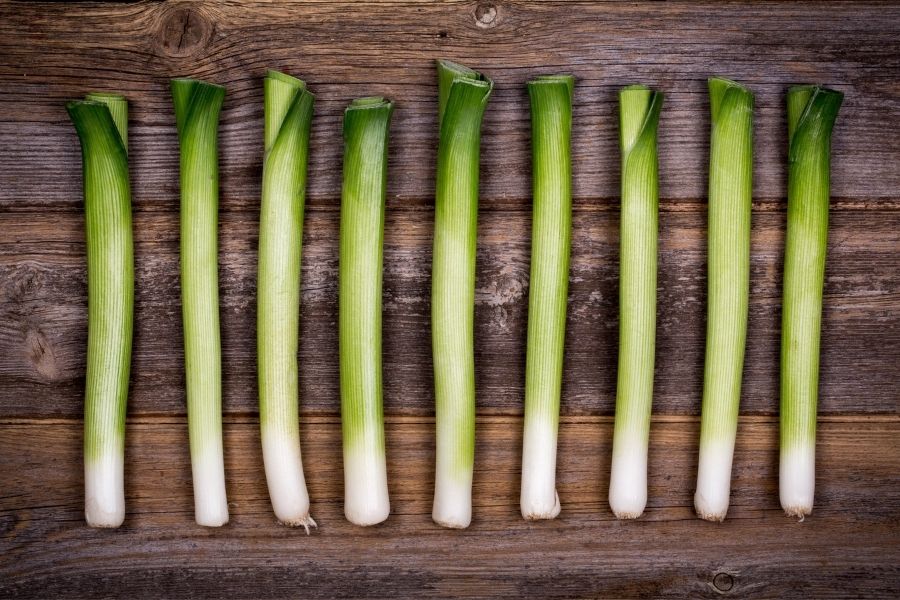 What part of leeks do you eat?

The best parts to eat from leeks are the white bulb and the lighter green parts. You can eat the darker green leaves, but they tend to not have as great of a taste as the other parts. The texture can be a bit annoying since they are thin, leathery, and don’t have much of a flavor.

The leeks are bulbous vegetables, so you will notice that they have roots that look like many strings. Make sure you do not eat or cook them, always cut those off.

Also, if you want to be on the safe side without getting an earthy taste, you should cut the bulb where the roots connect with it. You will notice that the part you should get rid of has a darker color than the rest of the bulb, so it should be pretty intuitive.

How to choose good leeks?

If you want to eat raw leeks, choosing a good one from the market is essential, so I will give you a few tips on doing that.

What to do with leeks?

Now that we know that leeks can be eaten raw, the next question is, what are they good for other than eating raw.

Here I will give you some ideas about what to do with leeks.

Leeks can substitute onions in cooked food or eaten raw as well since they have quite a similar taste. One thing to remember, leeks are not as moist as onions so you should expect them to fry more like green onions.

Since they don’t have the same sharpness as a scallion or the spiciness of an onion, they can be a choice in cooked food that most likely will please everybody at the table, so it is safer.

But keep in mind that some foods don’t taste the same without the strong onion taste, so in order to have a milder flavor, you can miss the critical point of a particular food.

Go for leeks instead of onions if you know someone who doesn’t like the spicy taste of onions but make sure that you don’t substitute them in every type of food.

Read Also: What Do Shallots Taste Like, And What Can You Swap Them For ?

Leeks can be eaten raw but not without some downsize like the fibrous texture. Other than that, it is safe to eat them if you wash them very well and cut the bad parts like the root and the darker green parts from the top.

Used them in your salad or cooked food but didn’t substitute them for onions if it is not necessary since you can make food taste weirder. We are used to certain foods with a particular taste, and onion is a significant contributor many times.