Have you ever wondered what makes onions so pungent ? There’s got to be something that makes them stand out form the veggie crows. And we have a sneaking suspicion that whatever makes them so strong-smelling is also making them so flavorful.

So why are onions so strong ? Why do they make us cry ? And how do you get rid of that onion smell after cooking ? Let’s find out. 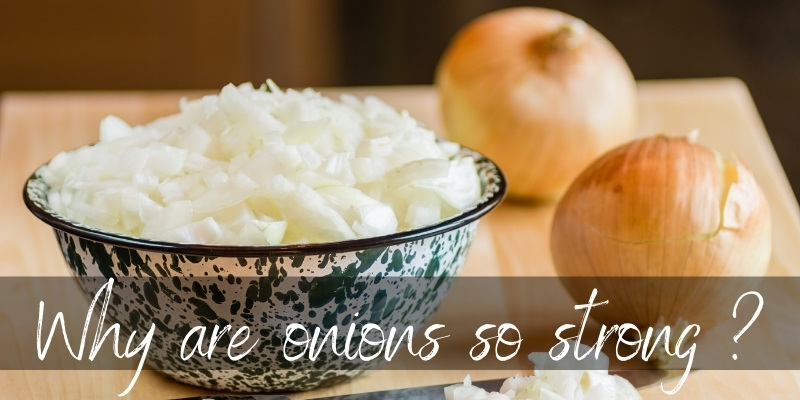 Table Of Content show
1 Why are onions so strong ?
1.1 Sulfur is in all Allium plants
1.2 Not all onions cultivars are the same
1.3 Why do some onions make us cry and some don’t ?
2 How to keep onions from making you cry
3 How to tone down an onion
4 How to remove onion smell from your house

Why are onions so strong ?

Onions are strong tasting and smelling because they contain a lot of sulfur derivates, like thiosulfinates and thiosulfonates. There is a complex chemical process that brings those sulfur derivates to the forefront, and it all starts with damaging the cell wall of onions through cutting, smashing, and cooking.

Older onions, as in fully ripe and mature ones, have the highest concentration and will thus smell and taste the strongest(spiciest). As sulfur is a very potent smell for us humans, onions will smell and taste particularly strong to us. It’s kind of the same deal as with broccoli, cabbage, and cauliflower.

Sulfur is in all Allium plants

Onions are just one part of the Allium genus. This genus includes species such as garlic, shallots, scallions, chives, leeks, and so on. All of these contain some degree of sulfur-based compounds. This is because as a genus they’re very good at absorbing certain nutrients from the soil they’re planted in.

Read also: Why Are Onions So Popular ?

Very, very few soil types do not contain any sulfur at all. If you were to plan an onion in a completely sulfur-free environment, you’d get a non-pungent onion. We’re not sure, but we think this could also drastically reduce its flavor.

Of course you can get soil with more sulfur, and this will lead t very pungent onions, garlic, shallots, leeks, and the like.

Not all onions cultivars are the same

The strength of onions is derived from the soil it’s planted in (sulfur content) and the actual cultivar that is planted. So for example white and yellow onions are the strongest and most pungent of the bunch.

They’re also the most common out there, and are also known as storage onions. These are the ones that have been allowed to fully mature underground and are stored for several weeks without breaking down.

Red onions by comparison are less pungent smelling but may be sharper and spicier. They’re better raw, though you can certainly cook them without a problem.

Why do some onions make us cry and some don’t ?

Onions make our eyes water because once cut, they release  syn-propanethial-S-oxide, which in turn releases into the air as tiny droplets (like a spray). Our eyes, once hit by said aerosol, produce tears to flush out the irritant. The trouble is that the more onions you cut, the more aerosol you release.

You can get around this, and we’ll show you how. 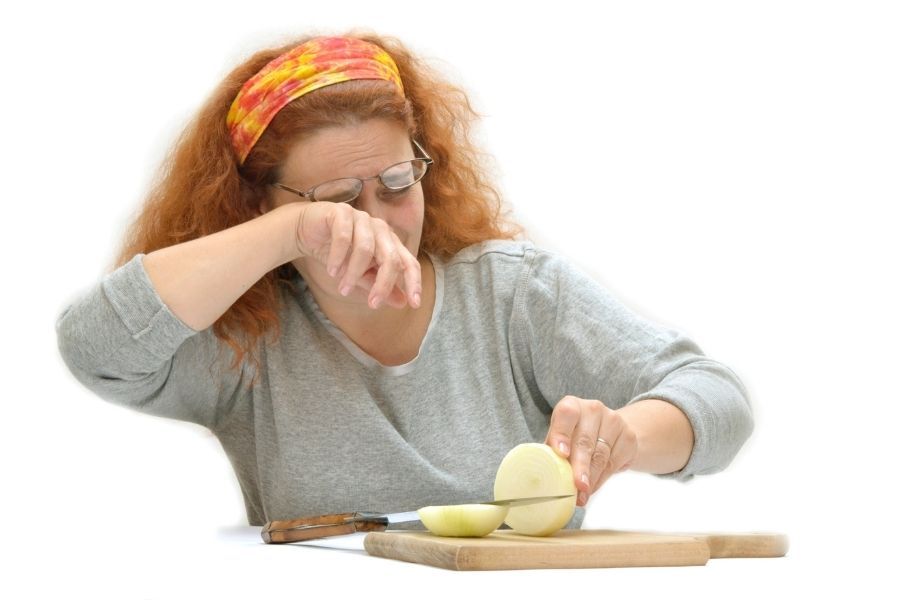 How to keep onions from making you cry

Do you love onions but really dread cutting them up  ? We’ve been there and we stand by you. The good news is there’s definitely something you can do to ward off the onion sting.

So let’s see where the sting comes from. It’s mostly the onion juice, and the milky substance when you cut into the root. You have to get rid of that juice or dilute it if you want it to stop releasing fumes into your eyes.

The first option would be to rinse the onion and the knife before you start chopping it. Rinse the knife every few cuts. This way the onion will have a fair amount of water to dilute the juice, and the eyes will thank you. This won’t stop an entire onion though, once you put it into a pan and start cutting the next one it will start to smell and get to you.

And here comes the second option, put a lid on the chopped onions ! It doesn’t matter if you’re only cutting for 10 minutes, the fumes will get to you even if the pot is further away.

There is a third option, though not many people go for it because you can’t easily control the cut. You can try cutting the onions underwater. You need a wide, shallow pan in which to place the cutting board. The water should be about an inch above the board. and you may cut the onion in the water, on the board.

This means a lot of cleaning up afterward, and draining the water to get the onions out.

How to tone down an onion

Alright, what if you accidentally chopped too many onions and now the entire meal taste like onions ? Well there are a few things you can do to tone down an onion, and here they are. Please note that there is no way to completely remove the onion taste from food.

When the onion is still freshly cut soak it in ice cold water. This will help it release some of its juices and reduce pungency. Or you can add some vinegar to that water to draw out even more. Rinse and then add to the pot.

Another option is to add a potato, as it will draw some of the flavor into it. But it will also give a potato flavor, so keep that in mind.

If the flavor of raw onion is the problem, then simmer the food for longer. The onions will start to break down and turn sweet. They will still taste like onions, but in much milder, sweeter way.

In a worst case scenario you can remove some of the onions from the food as it’s cooking. The flavor will still be there, but not as much.

Whenever you’re cooking with onions, keep in mind that they’re very strong. So use ingredients that will hold up to it, or pair well. For example chicken breast and white fish are very light meat, so you need to use just a little onion. Or maybe a shallot, or spring onions.

How to remove onion smell from your house

Whenever you’re cooking with onions the smell is fant5astic and it makes you hungry. But it’s a real pain to remove from the house. And if you have an open space kitchen, you definitely know what we’re talking about.

First let’s talk a bit about what happens when you cook onions. You damage the cell walls are release the sulfur derivates, which seep into the food. But some of them escape via steam, as tiny little droplets. Those droplets then end up on the counter, the stovetop, the cabinets, and get absorbed into clothes and furniture.

So the first thing you need to do is wipe down everything close to where you cooked the onions. Make sure to use an acidic ingredient as well, such as vinegar or lemon juice, mixed with water.

You can also use baking soda mixed with water to wipe down everything. Be sure to wipe again with a clean, moist towel a few times to ‘rinse’.

If the smell is in fabrics, wash them. If it’s in the furniture, wipe it down or use a textile cleaner (for couches and chairs). You will notice a significant improvement.

You can also try another trick, like brewing a pot of fresh coffee, simmering a pot of cinnamon and orange peels while you cook, or just placing a dish of making soda on the counter to absorb the smell. These work great, but if the smell is imbibed into the room and furniture, they can only do so much.

Of course, it’s mandatory to open the window wide when cooking onions and letting it stay open for another few hours after you’re done. IF it’s cold outside you can try the hood vent but it won’t be as powerful as the window.

Always keep the kitchen door closed when cooking with onions. If you have an open kitchen, remove any clothes that may be lying around and close all the doors leading to the kitchen.

In short, as long as you give the onions plenty of air they will stick around far less. But just to be sure, clean the kitchen thoroughly afterwards.