Scrambled eggs are a delicious yet messy breakfast, loved by all but very confusing to look at. It’s even a bit difficult to understand, especially if you’re looking to get a good grip on all the ways you can cook an egg. After all the perfect breakfast often entails eggs in some way or another.

So let’s take a look at scrambled eggs and omelettes, as these are the two most common ways to cook an egg, and the distinction between them is often blurry. 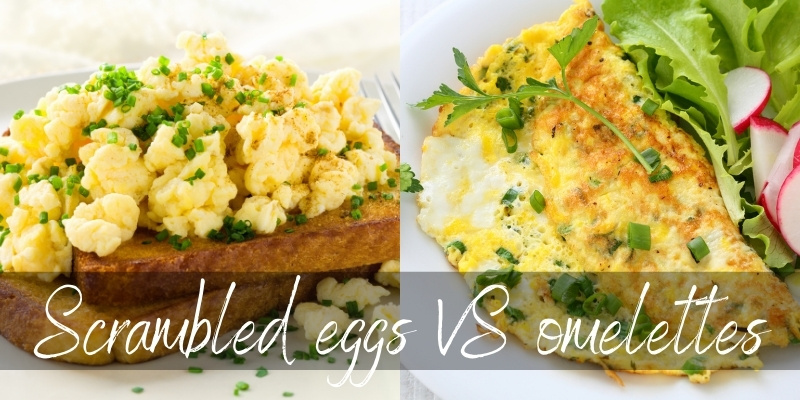 Scrambled eggs are egg curds, while omelette is a mass of whisked eggs that have cooked together. Often scrambled eggs are the result of a poor attempt at flipping an omelette, or trying to make a French omelette and timing it wrong.

Scrambled eggs are still cooked eggs but they often end up drier than an omelette, as most people try to cook the eggs thoroughly, often overcooking them.

There are different ways to make scrambled eggs, such as creamy, small curds, large curds, or simply chopping an almost done omelette into chunks. Omelettes are easier to make, as long as you do not try to flip them too early, or you don’t flip them at all.

In fact let’s take a closer look at scrambled eggs and omelettes, so we can properly compare the two. Both of these require some form of fat, such as butter or cooking oil.

When you’re making scrambled eggs you’re actually forming egg curds. those a small bits of egg that have already started to cook, surrounded by runny whisked eggs. To make scrambled eggs you have to stir, fold, and whisk every few seconds to let the curds form, but not so much that they coagulate into an omelette. 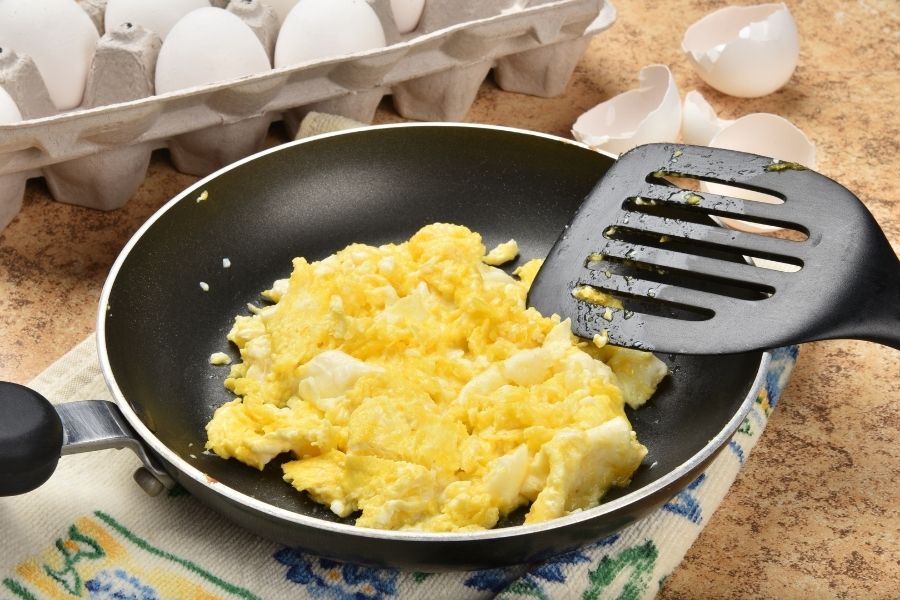 Read also: How To Know When Scrambled Eggs Are Done

If you were to stir continuously and cook them on low heat, they would get creamy and barely form, which would be the base for a French omelette.

If you stop stirring completely, the egg curds will coagulate and stick together as a single, big egg curd. Which is how you get an American or Western omelette. No stirring required.

Once the omelette is cooked through (the top will still be a bit creamy but not runny), fold it in half and slide it onto a plate.

Omelettes hold onto toppings much better

Whenever you’re cooking with eggs you’re likely having something on the side, be it bacon, cheese, peppers, spring onions, or anything else. Omelettes have the power to keep all those toppings inside, or mostly inside. Meaning that once the omelette is nearly done you can throw on the rest of the toppings, fold it over, and serve. This works best with ingredients that don’t require extra cook time.

Scrambled eggs can’t really hold onto any toppings, since most of the time the curds will hold onto themselves, if that makes sense. Any back bits, chopped mushrooms, or red peppers that you throw into the mix will likely end up outside of the egg curds. You can try and get around this by letting the egg curds get larger before you fold and cut, but you’re halfway to an omelette then. 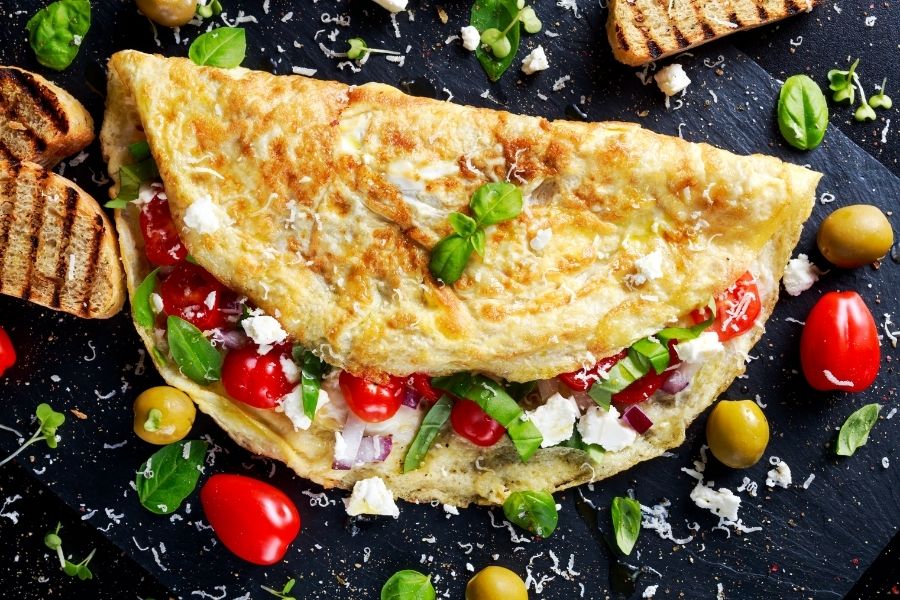 Since scrambled eggs are essentially just egg curds stirred around a hot pan, they dry out fairly fast. They have more surface exposed to hot air and hot pan, than an omelette. And each time you stir them to expose more curds, the older ones keep cooking until they eventually get fairly dry and chewy. The trick is to try and accept that some curds will be undercooked, since it’s difficult to make them the way you want.

Omelettes are much easier to get soft and fluffy, since they don’t dry out as fast. Even if you’re a pro at flipping, the omelette still has more moisture than scrambled eggs.

And no, you don’t have to flip the omelette every time. You can cook the top part by steaming it if you put a lid on the pan. We recommend a glass, transparent lid. Don’t worry about the steamed egg part, it won’t be a bad taste. It’s already mixed with plenty of butter.

Tips on getting the perfect scrambled eggs

We covered how to get the best omelette in a previous post.

Always whisk in the melted butter

Scrambled eggs require less butter than an omelette, that’s true. But that doesn’t mean you cant alter the recipe a little. Add as much butter as you normally would for an omelette, and whisk those eggs with the melted butter, right there in the pan. Keep whisking and stirring until most of the butter is incorporated.

Your curds won’t be fully formed by now, but the butter will be part of the eggs now. Use a medium-low heat for this.

Adding more butter results in a creamier, more moist scrambled egg. This means that even if the eggs look opaque but runny, they’re still cooked. No really, let them be creamy, they’re fine. As long as they were mixed with the hot butter they’re good. If you cook them more they will eventually dry out.

Of course this means your pan and spatula will end up very messy, but the result is delicious. You’re halfway to a French omelette if you do it this way. It’s a good way to learn.

Cheese is the only topping that can stay inside

Choose your toppings carefully when you make scrambled eggs. Ideally you want them to be inside the egg curds, so chop them very finely, and make sure they don’t have extra moisture otherwise they will separate from the eggs.

For example tomatoes and mushrooms will separate from the eggs. Very finely chopped chives ? They’re so small they’re likely to still be mostly within the egg structure.

Cheese ? Always on your side and part of the eggs, but will leave you with the messiest pan you’ve ever seen.

Bacon, ham, salami, sausage are all better if fried separately and served on top of the scrambled eggs. They have no chance of staying within the confines of the egg curd.

So there you go, scrambled eggs and omelette. Hopefully you’ll master both in no time and get your breakfast to the point you want it to be. Busy weekdays may be reserved for scrambled eggs, but lazy weekend mornings ? Definitely omelettes.