Gouda is one of those cheeses that finds itself on most folks’ favorite list.

But as great as it is, is Gouda a good melting cheese ?

As a cheese enthusiast, you’ve got to know. A lot hangs on this, from the perfect cheese fondue to that amazing grilled cheese sandwich or a nice, melty cheese sauce to cut right through that broccoli.

Well to find all of this out we really need to understand what Gouda is, what a good melting cheese is, and then figure if Gouda is one of those. So let’s see. 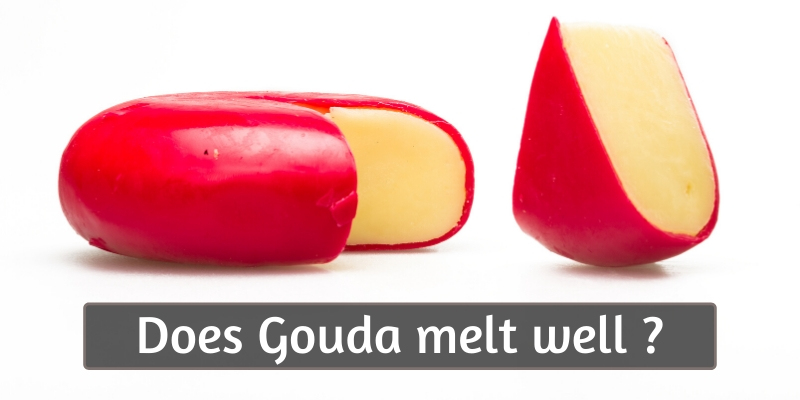 Is Gouda a good melting cheese ?

Yes, gouda is a good melting cheese because it’s got a relatively high moisture content. The thing that makes many kinds of cheese not good for melting is that they’re too dry, and have a smaller fat content.

Gouda has both fat and moisture, so it will definitely melt. Now, it also depends on what Gouda you use.

Fresh, young Gouda will have more moisture than aged Gouda so it will melt better.

If you’re looking for soupy, saucy cheese then Gouda won’t really be what you’re after. It’s simply not that thin.

You can totally put it in a grilled cheese or use it as part of a cheese dip, no doubt. But simply warming Gouda won’t make it into a sauce, you need a different cheese for that.

Gouda is a cow’s milk cheese named after a city in Holland. It’s mild flavored and distinctly yellow, and it can be aged up to nearly three years.

This is a semi-hard cheese and the aging process is what really defines it.

The flavor of fresh, young Gouda is very milk and might seem bland to those with an untrained palate, or if you’re eating it with something very strong like prosciutto.

Aged Gouda though, that’s where the fun begins. You’ll get notes that progress from nutty and buttery to slightly fruity and sweet, with a buttery aftertaste.

In short Gouda seems to be a rather ‘sweet’ cheese, by European standards. It’s not as sweet as Cheddar but is still not definitely salty, as you could say about a slab of Parmesan.

There’s an entire discussion (nearly debate) about what Gouda really is. This is because for most folks the specifics of how Gouda is made and how it came to be aren’t clear.

The original, traditional Gouda got its name from the town of Gouda, Holland. It’s where this big cheese fest was held in the summer and farmers came to show off their cheese.

But not all cheese sold in Gouda was the same, meaning it had variations in production, milk, the cows themselves and so on.

Modern Gouda is very much an umbrella term for cheese that follows a couple of guidelines for milkfat and moisture, and they just so happen to be veeeery similar to Edam. 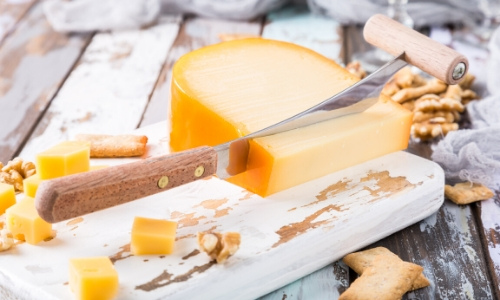 The USFDA has a nifty production guide for Gouda and for Edam, respectively.

If you want the short version, it’s that Edam is any cheese made of “minimum milkfat content is 40 percent by weight of the solids and the maximum moisture content is 45 percent by weight”. The ingredients may or may not be pasteurized, and this affects the curing temperature.

Conversely, Gouda has up to 46% milkfat as determined by solids weight, and moisture up to 45% by total weight.

So what does all of this mean ? Simply that modern Gouda is kind of far from traditional Gouda and most often you’ll find it in its fresh, young form.

What makes a good melting cheese

A great melting cheese is one with quite a bit of moisture – like mozzarella or brie – that’s also got some nice fat to it.

If it has only a bit of fat it’d be a crumbly mess and be more useful in a salad. We’re not making salad here, we’re making grilled cheese and drizzling over nachos.

Know that when making a fondue the cheese won’t just melt by itself, it will need some milk to melt into and depending on your taste it might not even need thickener to get that consistency right. 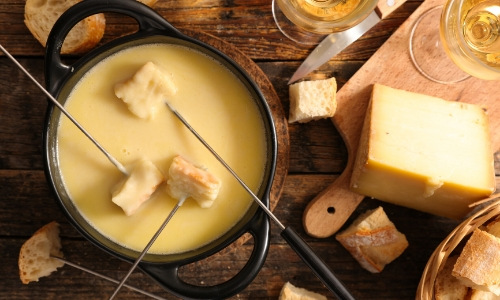 A few other examples of good melting cheeses are: Mozzarella, young Cheddar, Emmental, good Parmesan (due to high fat), Gryuere, Provolone, and the beloved Raclette (that half-wheel of cheese that’s warmed and scraped onto a plate of food, you know the one).

Of course, you can melt the cheese wrong. Not if you’re making grilled cheese, that’s easy. But you can muck up the fondue, so let’s talk a little about that.

How to melt Gouda for fondue

Fondue usually has several cheese types, but you can make it from just one cheese.

Keep in mind that the cheese is not supposed to boil ! Once you see the cheese starting to melt, turn the heat off and take the whole thing off the heat.

First, you need to heat some milk, bring it close to a boil. Season as you would like, and if you’re planning on thickening it be sure to mix in the flour or cornstarch before you add the cheese.

Those need a good simmer, and you can’t do that one the cheese is in.

To make sure your cheese melts, and it melts properly, bring it up to room temp before cooking. Then cut it into half inch cubes (or grate it if you’re feeling patient) so it melts more evenly.

Add it to the hot milk (thickened or not) and stir continuously. Give it a few minutes and be sure to keep it off the heat.

Gouda is a great melting cheese if you have it at home don’t hesitate to use it in grilled cheese, on pasta, or in other recipes that require melted cheese.

Hopefully, you got all the answers you were looking for. Gouda is a great melting cheese and there’s a lot you can do with it.