Parsley is an amazing herb, both for garnishing meals and for providing extra flavor. You’ve most likely had it without even knowing, it’s in so may dishes.

Some folks may wonder if parsley can be eaten raw, as most of the time you see it in its cooked form.

So this is what we’ve set out to find today, now let’s find out. 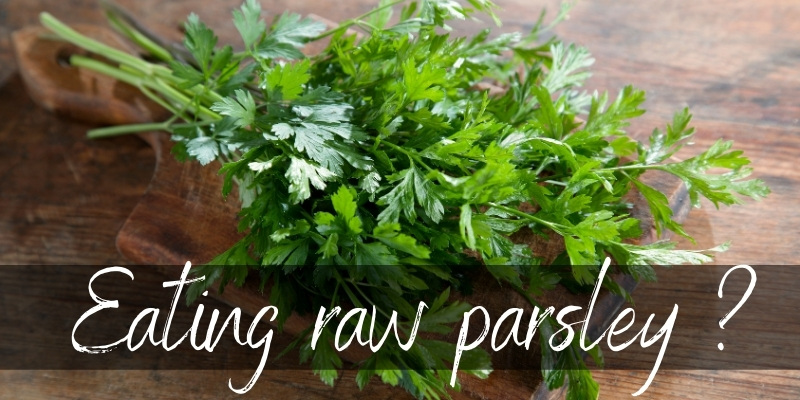 Table Of Content show
1 Can parsley be eaten raw?
2 Can you eat parsley stems?
3 What is parsley?
4 History and origins of parsley
5 Parsley in culinary uses
6 Preparing parsley in cooking
7 How do you store and choose the best parsley?
8 Conclusion

Can parsley be eaten raw?

Yes, parsley can be eaten raw. It’s leaves are eaten dried or fresh. It can be added into any recipe whether it may be a hot or cold dish.

Parsley can be added to a dish to enhance texture, flavor and color. Usually, the whole leaf is chopped into small pieces for better texture and taste.

The roots are widely used in soups. The dried parsley leaves are often used as a cooking herb. Parsley is a good source of vitamins that’s a perfect garnish for your meals.

Can you eat parsley stems?

Parsley stems are edible but they are a bit more bitter than the leaves and also the texture can be off-putting for many people. So while it is safe to eat them, most people throw them away because they are not so convenient and tasty.

You can use parsley stems in a salad, that way their bitter taste will get lost with the many flavors a salad can have or you can use them in a soup if you don’t want to throw them away.

It’s name was derived from an old English word “Petersilie”and also an old French word “Peresil”. Ancient Romans and Greeks had used this herb for the garnishing and flavoring of their foods.

You can usually see these herbs in a luscious green cluster and grows with stalks rising to about 1 meter. Parsley is often under appreciated and overlooked.

This herb isn’t just a decorative for your favorite meals in restaurants, it also has the ability to freshen up your breath every time you consume it’s leaves. In some ways it resembles mint or sage.

Besides the delicious taste it provides, it also has healthy nutrients. There are two types of parsley that are commonly used.

There is the Italian flat leaf parsley, and curly parsley. If you’re looking for a fragrant garnish without the bitter taste then the Italian variety is for you.

Another type of parsley is cultivated for it’s roots. It is a turnip-rooted parsley. It resembles burdock and salsify, which are also cultivated for their roots.

Parsley is a herb that is used to make medicines. Usually, parsley is a famous for treating constipation, asthma, high blood pressure, and diabetes. Also, it is used in medicinal teas as diuretics and expectorants. Parsley stimulates regular body function to improve digestion, and blood circulation. 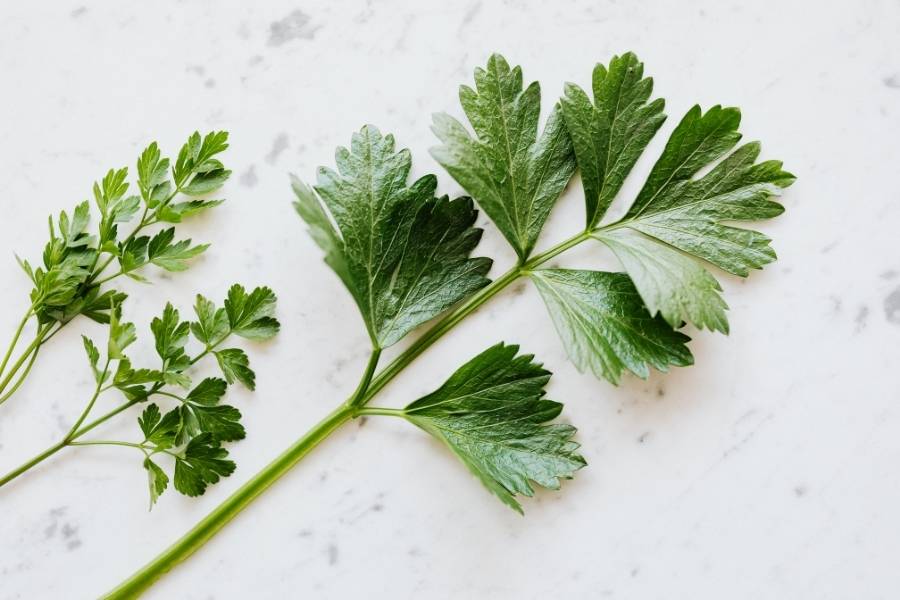 History and origins of parsley

Parsley is native to the South of Europe, mainly in the Mediterranean region. It has been cultivated for over 2,000 years and has been used in medicines before adding it as an ingredient in foods.

It was regarded as sacred by the ancient Greeks during their time. It was used for the winners, and victories of athletic contests. Parsley was also used as a decor for sarcophagus during the ancient times. Parsley as a garnish have been dated many years ago with the ancient Romans.

Parsley is often used as a garnish in Mediterranean, American, and Brazilian cuisines. The curly leaf parsley type is the one to use in garnishes.

The green parsley is a common garnish in potato dishes whether it may be mashed or boiled. Risottos, fried chicken, steaks, goose, vegetable and meat stews often have green parsley as garnishes.

Many dishes in Europe and Western Asia are served with parsley. It’s usually sprinkled onto means, at least for presentation purposes if not flavor. It can also be used in soups and sauces.

A popular dish called Persillade which is a mixture of chopped parsley and garlic can be found in French cuisine. If you love salsa, then this herb is also used as one of it’s ingredients.

Salsa Verde, a common Italian salsa is made with parsley mixed with garlic, onion, anchovies, vinegar, and capers.

The parsley’s roots are used in many stews, soups, and an ingredients in broths. The middle eastern cuisine also has parsley in their dishes. Their Lebanese dish, tabbouleh has parsley as a key ingredient.

Fresh parsley is washed first to remove contaminants. Wash carefully as it is fragile and it’s leaves are easily broken off.

Place the fresh parsley in a bowl of water and swirl it with your hands. Remove the parsley and throw away the water every time dirt gets removed from the parsley.

Repeat this until no dirt remains on the parsley. Parsley is usually added at the end of cooking for retention of it’s taste, nutrients, and vibrant color.

As for how to use parsley, it’s usually roughly chopped and added to the food. Some folks add both the stalks and the leaves, some add just the leaves.

The stalks are thicker and provide a bit of a crunch. Of course, you can finely chop the herb and then there won’t be a texture difference. 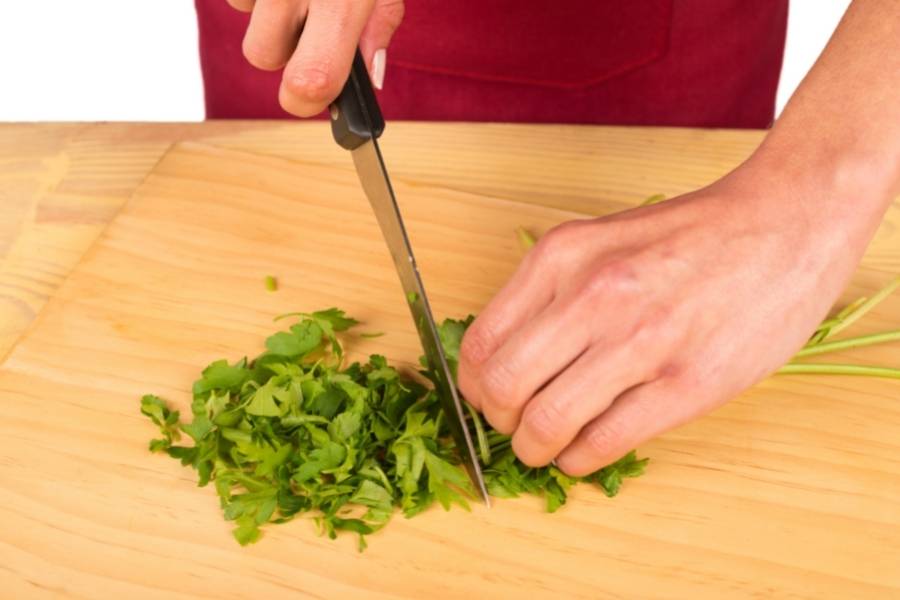 How do you store and choose the best parsley?

Look for parsley that is rich in color usually having a full dark green foliage. It should look crisp, fresh and fragrant.

Avoid choosing ones that are wilted or have an odd color as these may have been damaged or soiled.

As for dried parsley, choose parsley which is organic. This is to avoid contaminants like pesticides on your parsley.

Fresh parsley should be inside the refrigerator sealed in a plastic bag. If you notice that the fresh parsley is slightly wilted, then you can sprinkle some water to prevent it from drying out. Wash your parsley completely before storing to remove contaminants.

You can make dried parsley if you have flat leaf parsley. Just lay it out on a flat surface and once it dries out, keep it in a tightly sealed container that’s stored in a cool and dry place.

Curly leaf parsley are preserved by freezing. This helps the herb contain it’s flavor. The crispness is also retained by the freezing.

Parsley is a great herb to add to any meal,and yes it can be consumed raw. For example the tabbouleh salad we mentioned earlier has raw parsley in it.

You can use parsley in pretty much anything, and it’s a good alternative for coriander or celery leaves.