Coriander is one of the most popular herbs, and definitely one you’ve encountered at least once. Because of its distinct flavor, it is used in the entire world. From curries, sauces, dips to desserts, this beautiful aromatic herb can be used in so many ways.

The taste of coriander has always been very subjective. People either hate it completely or are head over heels for it. There is nothing in between.

Naturally, this topic warrants some looking into. We’re going to discuss what coriander tastes like, what you can do about it if you don’t like it, and how to use it in foods. 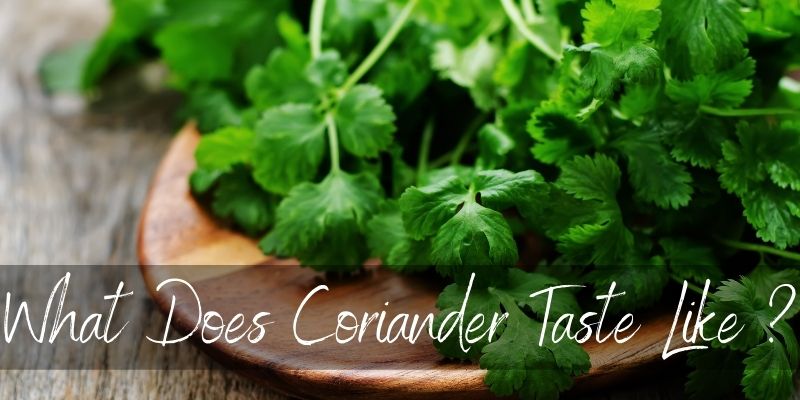 Table Of Content show
1 What Does Coriander Taste Like?
2 What does coriander powder taste like?
3 How to Use Coriander in Dishes
4 I don’t like coriander or cilantro, what can I do ?
5 Are coriander and cilantro the same ?
6 What Is The Difference Between Parsley And Coriander?

Fresh coriander (cilantro) tastes a bit sharp and lemony, with a herb aftertaste. However, the taste is also affected by cooking.

Now, talking about coriander seeds, they have a rather sweet smell, compared to the leaves. This aroma gets completely changed when you roast and grind them.

Before grinding, coriander seeds smell floral and contain a mix of citrus, sweet and spicy. If you’ve ever had curry you’ll be reminded of it. When the seeds are ground after roasting, the nutty flavors get enhanced. They also taste a little bit more lemony.

Coriander usually has a multifaceted flavor profile. The flavor and taste of fresh coriander leaves, the dried seeds and the powder are completely different from one another.

If we talk about the fresh leaves, they are hard to eliminate from some dishes due to their pungent aroma. It has an earthy, musk-like smell with simple citrus notes.

As mentioned above, the taste and flavor of coriander depends greatly on how long it’s cooked. However, the best part is its pungent taste doesn’t get mellow after cooking at all.

Fresh coriander leaves are usually added to the prepared dishes as a garnish, so that it imparts its freshness and flavor to the food. You can even add them while cooking if you like, it is up to you.

Moreover, some people say that the roasted and ground coriander seeds taste very different and have a vanilla-like flavor that can be used in desserts.

Coriander powder has a citrusy, nutty, and earthy taste that is different compared to the taste of fresh coriander leaves.

Coriander powder is widely used as a basic spice in Indian and other Asian cuisines. It tastes a bit more mellow than the seeds and fresh leaves. The taste can be defined as rather warm and musky. It is used in spice rubs and as a curry powder along with turmeric, chili and roasted cumin powder.

In conclusion, coriander is a multipurpose spice. It can be used in different ways due to its versatile flavors. It is usually linked to the “spicy” flavor in the same way lemon is linked to the “tangy” flavor.

How to Use Coriander in Dishes

The best thing about coriander is, it goes well with almost all kinds of savory dishes and a few sweet dishes as well. But there are some ways in which this spice or herb can take the dish to the next level.

It goes very well with tangy and super spicy meat dishes. Its earthy notes taste good with most soups, lentils and legumes. 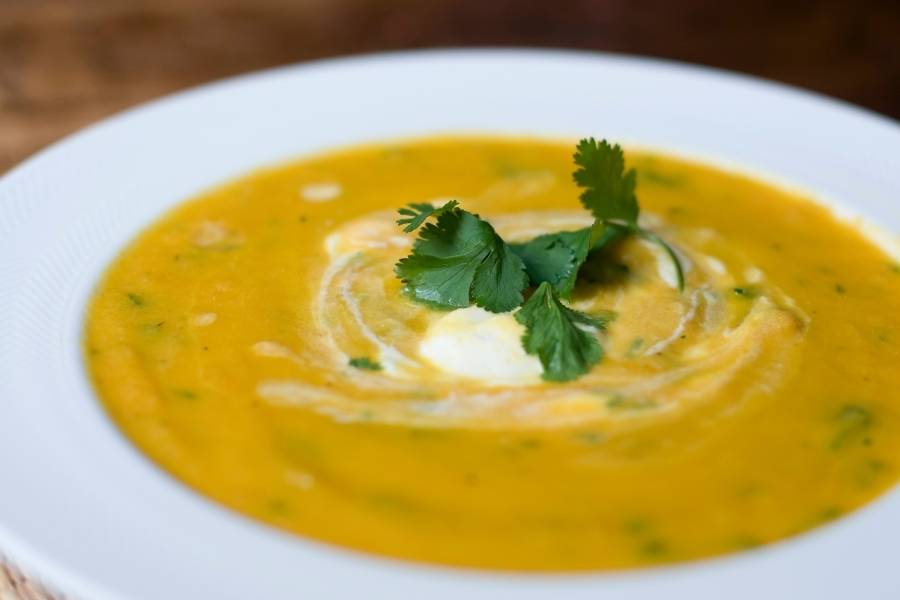 You can use it in all kinds of meat dishes including lamb, chicken, pork and duck. It even pairs great with seafood, just keep in mind that it can overpower it.

All you need to do is to sprinkle some freshly chopped coriander leaves to your prepared dish to enhance its flavor. Below are some of the other ways to use coriander :

I don’t like coriander or cilantro, what can I do ?

If you don’t like the leaves – so cilantro – you can substitute it for celery or fennel leaves, which are both flavorful but in different ways. Fennel is more towards the spicy side, while celery is rather herb-like.

If the seeds are the problem,  then fennel or cumin seeds will help, as will caraway.

Another option is to simply not add coriander or cilantro at all. If curry is what you’re making, and you’re buying a pre-made powder mix then look for one with less coriander in it. It should be towards the end of the ingredient list.

Taking inspiration from curry, a good way to cover up coriander is to add ginger, or maybe lemongrass.

Are coriander and cilantro the same ?

This is perhaps the biggest confusion ever – are coriander and cilantro the same, or different herbs? The answer is, they are different names for the same plant.

Coriander is an English word for cilantro. The term cilantro is used mostly in the western cuisine while coriander is used in Asian kitchens. While both of these come from the same plant, their flavors and properties differ a lot from each other.

When speaking of coriander, it is mostly about the seeds but cilantro strictly refers to the leaves of the plant. This is the most common difference between these two terms.

Even so, coriander and cilantro are used interchangeably by some folks, which makes everything even more confusing. Rest assured, in the end it’s the same plant.

What Is The Difference Between Parsley And Coriander?

Due to the similar looks, people often get confused between parsley and coriander. While both look a tiny bit the same, they are two different herbs. Coriander is also known as “Chinese parsley” but its flavor is very different from it.

Talking about the flavor, coriander is more sharp and full of flavor but parsley is a lot more mellow. It tastes a bit grassy to the people who are used to using coriander. Moreover, the coriander leaves are round and flat while parsley leaves are slightly long and curly.

Another difference between the two is that coriander has originated in East European and West Asian countries while parsley came from Mediterranean countries.

That’s all about the most aromatic and flavorful spice or herb. If you haven’t tasted coriander before, try it once and you’ll never be disappointed.